The pack may be closing in on Ayaka Hamasaki even as she closes in on 40, but they haven’t caught her just yet.

In the main event of Rizin 27 on Saturday, the Abe Ani Combat Club representative defeated Kanna Asakura by split decision, going 2-0 against the young contender and retaining her Rizin Fighting Federation super atomweight (49 kg/108 lb) title. With the win, Hamasaki, who turns 39 later this month, put just a little more distance between herself and the second greatest atomweight of all time — whoever you want to argue that is. Hamasaki’s résumé is nearly unassailable; in addition to being the only woman to successfully defend the Rizin atomweight belt, she still holds the record for the most defenses of the Invicta FC 105-pound title, with two. She counts wins over Invicta champs Herica Tiburcio and Jinh Yu Frey (twice), is 2-1 against her greatest rival, Seo Hee Ham, and aside from the loss to Ham, her only other setbacks have been at strawweight, against much larger, natural 115-pounders Claudia Gadelha and Livinha Souza.

Of course, if Hamasaki’s spirited performance on Saturday is any indication, it isn’t time to start chiseling her hall of fame plaque just yet. Here is the history of the Rizin super atomweight title, and the times it was won, lost or defended. For the most part, it tells the story of one woman, carving out a remarkable career in the sport’s lightest divisions. 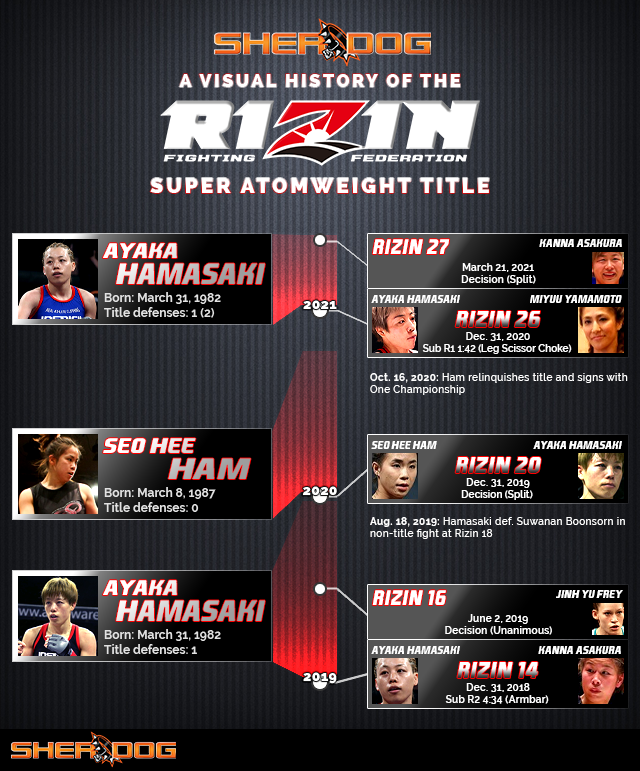