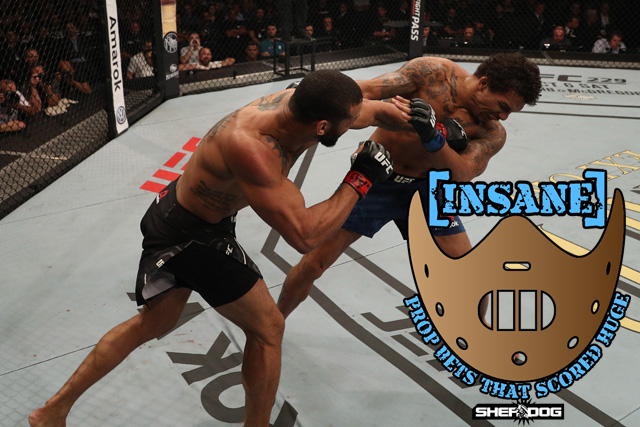 UFC Fight Night 137 on Saturday in Sao Paulo, Brazil, did not seem to have much buzz behind it due to a lack of star power on the main card, but it ended up being one of the craziest Ultimate Fighting Championship events of the year and featured a number of exciting finishes and unexpected outcomes. Whenever that happens, a number of insane prop bets come through. Below are five of the craziest props on the entire card to cash.


In one of the best fights of the year, Santos outlasted Eryk Anders and eventually stopped him at the end of the third round after a brutal series of elbows that completely took away the former University of Alabama linebacker’s ability to stand. It was a brutal war of attrition between two studs, and Santos walked away the winner in his light heavyweight debut. Most figured if Santos was going to win the fight he would do so early, so the prop on him winning in the third round was available at a juicy +825. That cashed big for those who backed it.


Do not call it a comeback. At 42 years of age, Nogueira put on one of the best performances of his career, as he outboxed Sam Alvey and knocked him out in the second round. It was Nogueira’s first win since a 2016 finish of Patrick Cummins and only his second win in the last five years. It could be argued that it was the best he has looked since he made his UFC debut in 2009, as he put away the notoriously durable Alvey with strikes. Not many people picked Nogueira to win, so the prop on him getting the knockout flew under the radar at a massive +1620.


Draws are extremely rare in the UFC, so the fact that Markos and Rodriguez fought to a majority deadlock should tell you all you need to know about why this was one of the biggest prop bets to cash all year. At +6500, the odds on Markos and Rodriguez fighting to a tie were massive -- and for good reason; this was the first UFC fight in 2018 to end in a draw. No one bets on draws in MMA because they happen so infrequently, but if you were one of the few who did, you were rewarded handsomely.


After Spann finished his last four fights, most figured that if he was going to beat Luis Henrique Barbosa de Oliveira he would do so by stoppage. That was not the case, as Spann was unable to finish his opponent, instead taking him the full 15 minutes to a unanimous decision. The prop on Spann winning by decision cashed at a beefy +555.


Sakai and Chase Sherman looked to be exhausted in the third round of their heavyweight fight, but Sakai somehow found enough energy to get a third-round TKO via strikes. It marked the third straight fight that Sakai has won via punches, this one coming in his Octagon debut. The prop on Sakai beating the chinny Sherman in the third round came through at a robust +1000.

Adam Martin is a mixed martial arts journalist who has been covering the sport since 2011. He is currently the lead odds analyst for Sherdog.com as well as the lead staff writer for MMAOddsbreaker.com. Adam is also the co-host of “The Parting Shot Podcast” on iTunes. His favorite fight of all time is Dan Henderson vs. Shogun Rua and he wishes Pride never died. Adam is based out of Toronto, Ontario, Canada, and he is a graduate of the University of Toronto and Centennial College. Get in touch with him on Twitter @MMAdamMartin.