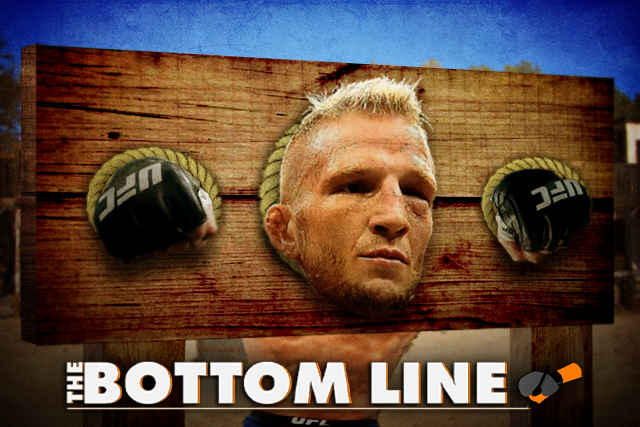 Back when T.J. Dillashaw last fought, Henry Cejudo was the UFC flyweight champion. At the time, there was some doubt about just how good Cejudo was, because his title win over Demetrious Johnson was quite close and at the time he had only finished one opponent over the course of his UFC career. Cejudo, of course, put those concerns to rest. He knocked out Dillashaw, then moved up to 135 to win the bantamweight title by knocking out Marlon Moraes and finally, knocked out Dominick Cruz to successfully defend the title. After doing all that, he retired and has surprised some by remaining retired for 14 months now.

The bantamweight division in the process proceeded to completely reorder itself. The top four fighters in the UFC 135 pound rankings immediately following Cejudo-Dillashaw were Dillashaw, Cruz, Raphael Assuncao and Moraes. They now stand unranked, No. 9, No. 11 and No. 6. The top four now are Aljamain Sterling, Petr Yan, Cory Sandhagen and Rob Font. Back then, they were ranked seventh, 14th, unranked and 10th.

Dillashaw in his last fight was competing at flyweight and that division has hardly been uneventful in its own right. It looked like the division had a new dominant force in Deiveson Figueiredo, who was so impressive in capturing and defending the flyweight crown that many had him among the elite pound-for-pound fighters in the sport. There was enough time in Dillashaw’s absence for Figueiredo’s entire championship rise and then for a new champion to be crowned in Brandon Moreno.

That all of these arcs, these rises and these falls, could take place with Dillashaw having done nothing but sit on the sidelines speaks to the challenge that awaits him when he returns to action on Saturday. Cory Sandhagen is a formidable enough obstacle, dominating against star fighters and hungry for a title shot. However, Dillashaw stares down more than just Sandhagen individually. He returns at 35, an uneasy age for any fighter and particularly one in a lighter weight division, and he does so with the challenge of reestablishing himself in a sport that may well have passed him by.

There’s reason to believe Dillashaw might be up to the task. This is an elite performer, with the wrestling background to dictate the terms of a fight plus the stealthy footwork and dangerous power to beat top notch strikers on the feet. There’s also a strong argument to be made that he has been unlucky over the course of his career. He got caught by John Dodson’s sneaky power in a key early fight, an upset loss that negatively altered perceptions of his potential. He was later involved in two razor thin, coin flip fights and in both instances he lost the split decision. It’s not hard to imagine him having a resume even more impressive than the one he possesses.

Unfortunately for Dillashaw, if he struggles against Sandhagen and in other upcoming fights, it will reflect to many fans more than just a fighter in his mid-30s on the decline. That is of course because of the elephant in the room that’s pumping out red blood cells: Dillashaw’s EPO suspension. Drug test failures linger for high-level athletes but they are most devastating to the legacies of athletes towards the end of their careers.

A young athlete who fails a drug test has plenty of time to come back, produce at a high level, and make fans forget about the earlier failure. On the other hand, for the athlete that fails late in their career and never produces again at the top level, there’s a simple story to be told — whether it’s true or not. That guy was always a cheater. That’s why he succeeded. Once he got caught, he knew he couldn’t get away with doing the same stuff and that’s why he was never the same.

This mentality only gets worse the more disliked the athlete was to begin with. That’s an additional problem for Dillashaw. Dillashaw was hardly one of the sport’s most hated figures, but he had his critics for the way he left Alpha Male and got into trash talking battles with a number of popular opponents over the years. If Dillashaw isn’t able to regain a similar position in the sport to the one he held before his suspension, there will certainly be those eager to declare his entire career a fraud.

It is thus a thorny predicament Dillashaw finds himself in. He returns to a changed sport, fighting hungry younger opponents looking to claim what he already had. If he loses, it hurts not just his future but his past. That is the predicament Dillashaw put himself in and now he’s the only one who can get himself out of it. He’ll need all the skills he spent the last decade accumulating to do it.