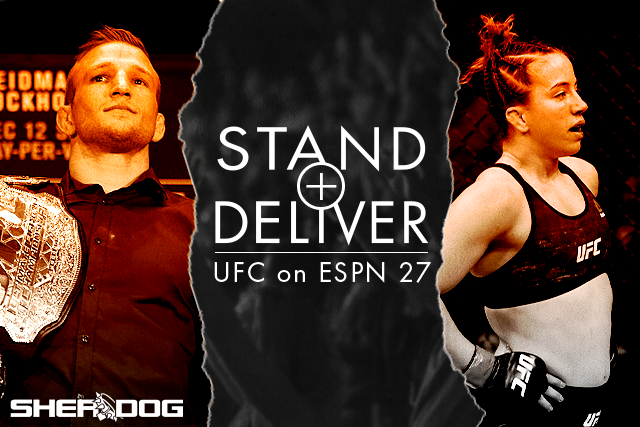 
In some ways, a win is a win and a loss is a loss. But while every fight matters, some seem to matter more. In some cases, the reasons are easy to define. Picture the fighter on a losing streak who knows he or she is likely fighting for their job; or conversely, any matchup on Dana White's Contender Series, where two hopefuls know that the brass ring is within their reach if they can win impressively. In other cases, a fight feels especially important for reasons that are harder to quantify, but no less real. Whether it’s the pressure of being a pioneer in MMA from one’s country, or the simple added spice of two fighters who really hate each other’s guts, that fight means just a little more.

This weekend, the Ultimate Fighting Championship is back at the Apex in Las Vegas with UFC on ESPN 27. For a column dedicated to highlighting fighters who are under the gun to perform right now, the headliner provides one of the most extreme cases of that phenomenon we’re likely to ever see. More on that in a moment.

The rest of dozen fights that make up “UFC Vegas 32” feature plenty of athlete in high-pressure situations, as well. There are some former prospects looking for a second chance and a few who are probably staring down their last chance. There are also some late replacements that will have one fighter facing the unreasonable expectations of an overwhelming betting favorite. Here are three fighters under pressure to stand and deliver at UFC on ESPN 27.

Now or Never, All or Nothing, T.J. Dillashaw


Dillashaw’s was one of the most precipitous falls from grace of any top fighter in MMA history. In three months, he went from being arguably one of the five best pound-for-pound fighters in the sport, to an example of hubris in his failed attempt to become a two-division champion, and finally a drug-tainted pariah. Now he returns, and while MMA loves second chances — including the UFC, whose promo videos depicting the suspension as something that happened to Dillashaw rather than something he did to himself are a hilarious exercise in historical revisionism — this is probably his last chance.

It is not hyperbole to say that in many ways, Dillashaw’s legacy hinges on his headlining bout against Cory Sandhagen in this Saturday’s main event. Such is the plight of an elite fighter coming back from a high-profile suspension for performance enhancing drugs: Dillashaw's past, as well as future achievements become suspect. The former bantamweight champ has the potential to tarnish, or begin to validate, a decade of work in 25 minutes or less. If he performs poorly, even in a winning effort, and especially if his once-stellar pace and cardio are not on display, there is a large sector of fans who will conclude that erythropoietin was Dillashaw’s secret sauce all along. Never mind that he is a 35-year-old man with a movement-heavy style, returning after over two years to a division that is not typically kind to the elderly. It may not be entirely fair, but again, this is a situation of his own making.

On the other hand, redemption — real redemption, not a promoter sweeping things under the rug — is there for the taking. It’s a simple, two-step plan: One, don’t fail another drug test; and two, win fights. That starts this weekend at the Apex.

The Nickname Is About to Become Ironic, Maycee Barber


As 2019 drew to a close, “The Future” was about as appropriate a handle as one could find in mixed martial arts. Barber, just 21 years old at the time, was 8-0 with seven finishes and had mauled her first three UFC opponents. Her status as a prodigy trained in MMA literally from childhood, her physicality, aggression and finishing instincts, all pointed to a fighter who would be a flyweight contender sooner rather than later.

Eighteen months later, Barber is on a two-fight losing streak and in danger of becoming the past, at least in terms of the UFC roster. The first of those setbacks, against Roxanne Modafferi in one of the biggest upsets of 2020, was at least partly excused by an in-fight injury to Barber, and an incredibly tough and wily opponent in “The Happy Warrior” who took full advantage. Barber’s loss to Alexa Grasso this February was more concerning, as Barber found herself outmuscled and outwrestled for two out of three rounds by a former strawweight who had been generally thought of as a striker. More than the mere “L,” it was the first time a healthy Barber had been unable to impose her will on an opponent.

That brings us to this Saturday and the main-card clash with Miranda Maverick, perhaps the division’s hottest prospect. Like Barber, Maverick is young, athletic and dynamic. Unlike Barber’s first 10 opponents, Maverick will likely enter the cage as the betting favorite. The UFC’s choice to match Maverick and her five-fight winning streak against Barber on a two-fight skid has all the appearance of feeding the old lions to the young, as ridiculous as that sounds when referring to a fight between a 23-year-old and a 24-year-old. Barber’s job is likely secure even if she loses this weekend, but any last vestiges of her blue-chip status are absolutely on the chopping block.

Don't Go Down as "The Bread Truck Guy," Mickey Gall


In hindsight, was it inevitable that Gall’s UFC career would be associated with gimmickry and sideshow fights? After all, he signed with the promotion as a 1-0 fighter with the chance to become Phil Brooks’ debut opponent in MMA. After easily tapping out Mike Jackson to win the “CM Punk” derby, then making similarly quick work of Brooks himself, Gall choked out Sage Northcutt, who was seen as another symbol of the UFC hype machine and its fruitless search for new stars, but in fact proved to be a UFC-level welterweight.

After the Northcutt win in December 2016 is when things went sideways. Imagine if Gall had gone on from there to become a Top 10 welterweight; it’s easy to picture saying, “Can you believe he was originally brought in to fight CM Punk?” as a humorous trivia note that enhanced, rather than defined his career. Instead, Gall has stagnated, alternating wins and losses, mostly against fighters who subsequently washed out of the UFC, and the narrative is something closer to, “Can you believe the guy is still around?” As much as your columnist loves Jackson, if he’s the only fighter you’ve beaten that is still on UFC roster — as is the case with Gall — that isn’t a great look.

Gall’s job may be safe even with a loss to Jordan Williams on Saturday. The 29-year-old is, after all, a not-bad-on-paper 5-3 in the UFC. However, his chances to go down as much more than a footnote — or Mike Perry’s last Octagon win — are just about gone.
« Previous Next »