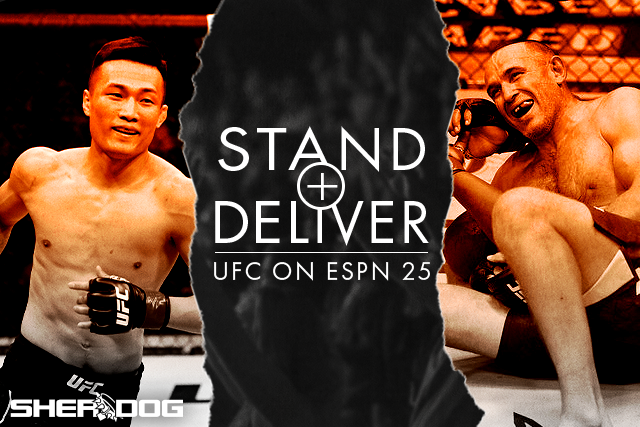 
In some ways, a win is a win and a loss is a loss. But while every fight matters, some feel as if they matter more. In some cases, the reasons are easy to define. Picture the fighter on a losing streak who knows he or she is likely fighting for their job; or conversely, any matchup on Dana White's Contender Series, where two hopefuls know that the brass ring is within their reach if they can win impressively. In other cases, a fight feels especially important for reasons that are harder to quantify, but no less real. Whether it’s the pressure of being a pioneer in MMA from one’s country, or the simple added spice of two fighters who really hate each other’s guts, that fight means just a little more.

This weekend, the Ultimate Fighting Championship will attempt to shake off any hangover from Saturday in Phoenix and what was literally its longest event ever, and return to its home base at the Apex for at least the next three months. First up is UFC on ESPN 25 — “UFC Vegas 29” if you prefer, headlined by featherweight contenders Chan Sung Jung and Dan Ige in a fight that can probably be penciled in for some kind of post-fight bonus right now.

Outside of that main event, the rest of the card is short on Top 10 fighters but features quite a few intriguing prospects, including some who need to bounce back from their first Octagon setbacks. That is fertile ground indeed for this column, of course. Here are four fighters from “UFC Vegas 29” who are under a little extra pressure to stand and deliver.


Make no mistake: Chan Sung Jung is the man who should be feeling more urgency in Saturday’s main event. One, he’s currently a betting pick-em against a man ranked four places behind him in the UFC’s official rankings, six places behind him in Sherdog’s. More importantly, however, the 34-year-old Jung needs to prove he isn’t on the downslope of his career. His three UFC losses — Jose Aldo in a title fight, Brian Ortega in a title eliminator and Yair Rodriguez, thanks to a one-in-a-million buzzer beater — are as forgivable as they come, but he has already seen the top of the featherweight mountain and been turned back.

Ige, on the other hand, has all the appearance of a contender still on the rise, and is being matched accordingly by the UFC. He took a bruising loss in his first Top 10 showcase against Calvin Kattar, and after one bounce-back fight, here he is again, headlining against an even bigger name and higher-ranked fighter in Jung. At 29, even if Ige loses on Saturday, it’s likely he can fight his way back yet again. The reverse might not be true. Put simply, if Jung wants to prove himself still a contender rather than a gatekeeper to the truly elite, he needs to win this fight.


As Demian Maia demonstrated at UFC 263 last weekend, the UFC is a tough place for a 43-year-old grappling specialist to ply his trade. The apples-to-oranges of it, however, is that Maia is a welterweight and Oleynik hangs out with the big boys. In some ways it’s kept Oleynik more competitive; Maia hasn’t been able to buy a takedown against a top contender, much less a submission, in what feels like forever. Meanwhile, Oleynik had Derrick Lewis, who might be your UFC heavyweight champ by the end of the year, in all kinds of trouble last August. However, it also means the enemy artillery trained at Oleynik’s face is on a whole different level. Where Maia has mostly been stymied in frustrating rinse-and-repeat decisions over the last few years, Oleynik has been getting knocked out. Badly. While he did a remarkable job avoiding damage for most of his career, Oleynik now has four KO or TKO losses in his last six fights. All four were certified heavyweight maulings, and one, by Walt Harris, saw him get knocked completely cold, falling backward over his own leg like Mirko Filipovic.

That brings us to this Saturday and Oleynik’s co-main event tilt with Sergey Spivak. In the post-Joe Silva UFC, it is no longer rare to see a fighter on a winning streak pitted against a fighter on a losing streak, but even by the modern standard, this fight reeks of feeding the old lions to the young. Spivak is 26, improving from fight to fight and while he is no Lewis or Harris, he has solid heavyweight power. His only UFC losses have come against Harris, by quick knockout, and Marcin Tybura, who used superior size and better wrestling to grind out a workmanlike decision. Neither of those are likely avenues to victory for Oleynik, who was all about craft and wiliness even in his athletic prime a decade ago. If Oleynik loses to Spivak this weekend, especially if it is another knockout, the UFC might well take the decision out of his hands, but win, lose or draw, one hopes the veteran has one eye on his post-MMA future and quality of life.


It’s heavyweight, and it’s the show-must-go-on COVID era, so it isn’t necessarily guaranteed that Parisian and Martinez are fighting for their continued employment on Saturday, despite being a combined 0-3 in the UFC. Both men have shown signs of life even in failure. Two-time Dana White's Contender Series winner Parisian survived a serious shellacking by Parker Porter in the second round of their fight last November, but was right there trying to finish the fight to the very end. Martinez’s Octagon debut was against undefeated prospect Alexander Romanov — that one's free — and against Don’Tale Mayes, if nothing else he brought some very Wesley Correira-esque energy to a fun slugfest.

However, the UFC heavyweight division in headed in a direction where channeling “Cabbage” may not have much place. Parisian will be 32 in a few weeks and Martinez is 35, while a youth movement including Spivak, Romanov and Tom Aspinall are stringing together wins while knocking off the old guard, and 30-year-old Curtis Blaydes and 31-year-old Ciryl Gane are staking out spots in the heavyweight Top 5. If Parisian and Martinez want to retain not just their contracts but their shot at divisional relevance, go time is now.