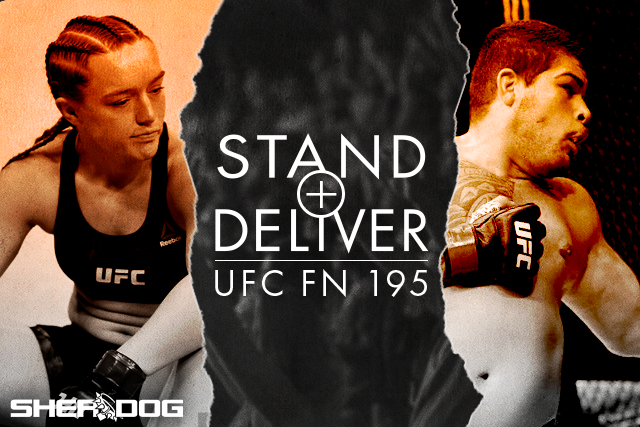 In some ways, a win is a win and a loss is a loss. The difference between any two fights lies in the stakes. Think of a fighter on a losing streak who knows he or she is likely fighting for their job; or conversely, any title fight in a top regional organization, where the participants know they are almost certainly being scouted by MMA’s big leagues. At other times, a fight feels especially important for reasons that are harder to quantify, but no less real. Whether it’s the symbolic burden of being a pioneer in MMA from one’s country, or the simple added spice of two fighters who really hate one another’s guts, that fight means just a little more.

This weekend, UFC Fight Night 195 all but forces us to look at the minutiae, to delve into the smaller narratives behind the big storylines, because those big storylines are basically nonexistent. While I’m trying hard not to engage in hyperbole, the card they’re calling UFC Vegas 40 might be the thinnest Ultimate Fighting Championship offering in the last five years. Through a combination of bad luck and the promotion’s chronically overtaxed schedule, we’ve finally arrived at a UFC card without a single ranked fighter on it — unless you count the woman fighting outside of the weight class in which she is ranked. Frankly, it looks like a good week for Bellator MMA to counterprogram this card with the semifinals of its light heavyweight grand prix, which is precisely what the promotion did.

However, just because a card is light on implications for the sport at large doesn’t mean that those fights don’t mean the world to the 22 men and women who will enter the Octagon on Saturday night. And as always, the stakes loom larger for some fighters than for others. Here are two fighters under a little extra pressure to stand and deliver at UFC Fight Night 195.

Aspen Ladd: Make the End Justify the Means, At Least


I wrote about Ladd in this space just two weeks ago, ahead of her scheduled matchup with Macy Chiasson, pointing out that both women — but especially Ladd — appeared to be brutalizing themselves to make the bantamweight limit, even though the featherweight division is ruled by the same woman, Amanda Nunes, and the path to a shot at her title was far easier there. Considering that Ladd had usually looked like death warmed over on the weigh-in scale before missing a whole year with a knee injury, I harbored some concerns over whether she would make weight at all.

It didn’t feel particularly good to be right, as the 26-year-old Californian yet again came to the scale twitching and shaking, actually missed weight this time, and ended up having her fight canceled. It felt even worse to see her get the call as a short-notice replacement for Holly Holm in this Saturday’s main event; it looks an awful lot like being rewarded for failure to meet her professional responsibilities.

If there’s a bright side to this situation, it is that Ladd’s new headline assignment will be contested at featherweight, against a woman in Norma Dumont who shares some of Ladd’s upside and all of her chronic difficulty making 135 pounds. This matchup is a solid object lesson in how Ladd might have been well served to come back at 145. Consider that Dumont would likely have been in line for a title shot if she had gotten by Holm, and then consider that Ladd, despite everything, is a comfortable favorite to beat Dumont this weekend.

When the dreaded day comes that a fighter dies while working for a top-level promotion in a jurisdiction where MMA is regulated, it will almost certainly be due to weight cutting rather than in-cage injury. For that reason, I don’t feel comfortable with this quick turnaround for Ladd after the disaster of two weeks ago, even if it is at a heavier weight — and yes, even featherweight entails a serious weight cut for Ladd; for her fight with Germaine de Randamie in 2019, she walked into the cage at nearly 160 pounds, leading the California State Athletic Commission to threaten not to sanction her at bantamweight anymore. However, she remains an absolute mauler of a fighter and a joy to watch. If this fight is what it takes to convince Ladd to pick on people closer to her own size, for the sake of her own kidneys and brain if nothing else, it would be a good thing indeed.

That “Pit Bull” Still Has Some Bite, Carlos Felipe


If there was a Bizarro-world inverse version of this column, Felipe’s opponent this weekend, Andrei Arlovski, would be on the cover. The 42-year-old former champ is playing with the purest of house money at this point in his career: Nobody expects him to contend for a title again, yet his job is probably safe even if he loses to Felipe. He remains a relevant fighter in 2021 in a way nobody would have predicted a decade ago, considering his reliance on athleticism and the apparent fragility of his chin and psyche. Even now, it still takes a serious contender like Tom Aspinall or Jairzinho Rozenstruik to make Arlovski look like an easy out. It’s all gravy and paychecks from here on out, and as a fighter who experienced some crushing lows even in his prime, Arlovski isn’t tarnishing his legacy in this final act, but simply adding chapters.

In contrast, Felipe is 26, which is young even by the standards of the youth movement that has injected new life into the UFC heavyweight division over the last two years. A massive, barrel-chested tank of a man, he nonetheless retains some of the surprising quickness that made him standout on the Brazilian regional scene, even if his knockout power has not yet shown itself at the UFC level. He is 11-1 as a professional, with the lone loss coming in his UFC debut, at the hands of fringe contender and fellow young ‘un, Sergey Spivak. Since the Spivak loss, “Boi” has won three straight over progressively better competition, leading to this Saturday’s date with Arlovski, who represents not only a legendary name for the ledger but, as mentioned previously, a legitimate test of Top 10 potential.

That means all the pressure is on Felipe. If he wishes to keep up with the likes of Alexander Romanov and Chris Daukaus, let alone catch up to the Aspinalls and Rozenstruiks, he needs to beat Arlovski this weekend, and it would be even better to do it in convincing fashion. All of a sudden, these are fast-moving heavyweight waters.