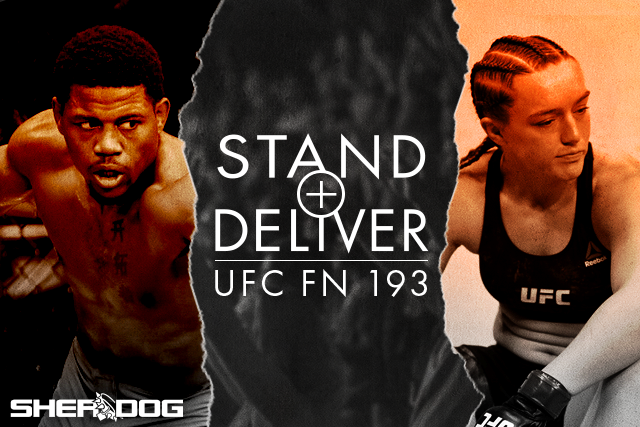 In many ways, a win is a win and a loss is a loss. The difference between any two fights lies in the stakes. Think of a fighter on a losing streak who knows he or she is likely fighting for their job; or conversely, any title fight in a top regional organization, where the combatants know they are almost certainly being scouted by MMA’s big leagues. At other times, a fight feels especially important for reasons that are harder to quantify, but no less real. Whether it’s the symbolic burden of being a pioneer in MMA from one’s country, or the simple added zing of two fighters who really hate each other’s guts, that fight means just a little more.

This Saturday, UFC Fight Night 193 can’t help but feel like a bit of a lull after the last weekend’s two-title-fight extravaganza — not to mention that historic rematch. However, the card they’re calling UFC Vegas 38 is a rich offering in its own right. It’s headlined by Brazilian concussion artists Thiago Santos and Johnny Walker in a light heavyweight contenders’ fight that exemplifies the spirit of this column: The winner may be deceptively close to a title shot, while the loser’s stock will take a blow from which it may never recover.

The remainder of the 13-fight card is littered with two kinds of fighter: red-hot prospects and…formerly red-hot prospects. In the case of the latter group, it isn’t so much that they’re in danger of losing their jobs, but they’re on the brink of becoming just another guy or gal in the increasingly anonymous UFC rank-and-file. While this column typically focuses on fights where one fighter is under more pressure than the other, the Santos-Walker main event sets the tone for the whole card, which features two more matchups between fighters in more or less the same situation. In light of that observation, here are some fighters under a little extra pressure to stand and perform at UFC Vegas 38.


As 2021 dawned, Holland was Sherdog’s reigning “Breakthrough Fighter of the Year,” having styled his way to stardom and into the middleweight Top 10 with a memorable five-fight campaign in the year of Covid. Daukaus was one of the division’s brightest prospects, a Dana White's Contender Series alum and Cage Fury Fighting Championships titleholder whose only UFC loss had come in a competitive scrap with similarly prized prospect Brendan Allen.

What a difference nine months make. Going into their co-main event matchup this weekend, Holland is coming off back-to-back losses that, at best, have laid bare his flaws for the world to see, if not provided an actual blueprint for exploiting them. Daukaus, meanwhile, is no longer even the top UFC fighter from his own family, as his older brother Chris’ surprising run to heavyweight contention, combined with Kyle suffering another setback against another up-and-comer in Phil Hawes, has moved the mantle of “the other Daukaus brother” squarely onto the younger sibling.

The stakes for Holland and Daukaus are similar — and similarly unforgiving. In a wide-open middleweight division still clamoring for fresh title contenders, the winner of Saturday’s fight is right back “in the mix,” as their promoter might have said once or twice. The loser will appear to have further confirmed his status as a flash in the pan, however unfair that might be.

Aspen Ladd vs. Macy Chiasson: Taking the Long Way Around


Before saying anything else, it’s worth mentioning that both Ladd and Chiasson are physically large and powerful bantamweights who appear to have difficulty making the divisional weight limit, and are fighting for the right to eventually challenge Amanda Nunes for the title. This, despite the possibility that if either of them expressed a willingness to fight at featherweight, she could probably challenge Nunes for that belt next weekend. It’s a bit of a head-scratcher for both women, but especially in the case of Chiasson, who came to the UFC through Season 28 of “The Ultimate Fighter,” which had been created expressly to find 145-pound challengers for Nunes.

However, that’s just a side note to this weekend’s matchup. As bantamweights, the 9-1 Ladd and 7-1 Chiasson are both contenders whose sole losses took place over two years ago and feel either excusable, or like the work of an entirely different woman: Ladd suffered a 16-second TKO loss to Germaine de Randamie that many observers argued was a premature stoppage, while Chiasson dropped a competitive decision to a far more experienced contender in Lina Lansberg. When faced with a similar foil in Marion Reneau this March, Chiasson’s fight IQ and gas tank did not fail her.

Heading into their matchup at UFC Vegas 38, Ladd and Chiasson are jockeying for position in a division that is frankly starving for fighters who haven’t yet faced Nunes or Holly Holm, the still-formidable sentinel outside the pound-for-pound queen’s palace. (Again, women’s featherweight is even more starved for title challengers, more so than any other UFC division, in fact, but I’ll stop harping on that now.) Put simply, the winner on Saturday might be on the doorstep of a bantamweight title eliminator, while the loser will have to take an even longer way around, facing the likes of the ever-relevant Raquel Pennington and the newly returned Miesha Tate before she earns another glimpse at the top of the mountain.


The older sister of flyweight champ and pound-for-pound stalwart Valentina Shevchenko came to the UFC held aloft by the promotion’s most obvious good wishes. She was signed out of Season 2 of DWCS off of a victory that had frankly seen her struggle — this, back in the days when the Contender Series did not automatically sign 90% of winning fighters. Once in the UFC, “La Pantera” was matched up sensibly, even conservatively, but has responded by alternating wins and losses on her way to a 3-3 Octagon tally despite being the betting favorite in all six fights. In those fights, the divide has been clear: Shevchenko has lost to the Top 15-ish fighters and beaten the lower-level women, with the exception of a win over Ariane Lipski that seems to be aging pretty well.

The days of the elder Shevchenko being groomed and developed appear to be over, as her opponent this weekend is 23-year-old Aussie phenom Casey O'Neill, one of the flyweight division’s hottest prospects and a savage finisher to boot. O’Neill will likely be a 2-to-1 or greater favorite by fight time. It is a matchup that smacks of feeding the old lions to the new. There’s nothing wrong with that in principle — it’s how the next generation of contenders is made — but if Shevchenko aspires to be anything more than lunch, and a cornerwoman for another half-dozen of her little sister’s title defenses, now would be the time to step up and change the narrative.