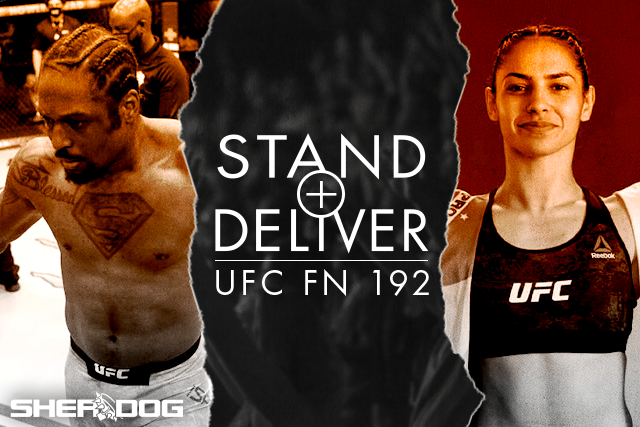 In some ways, a win is a win and a loss is a loss. The difference between one fight and the next lies in what’s at stake. Picture the fighter on a losing streak who knows he or she is likely fighting for their job; or conversely, any title fight in a good regional organization, where the combatants know they are almost certainly being scouted by the big boys. At other times, a fight feels especially important for reasons that are harder to quantify, but no less real. Whether it’s the symbolic heft of being a pioneer in MMA from one’s country, or the simple added spice of two fighters who really hate each other’s guts, that fight means just a little more.

This Saturday, UFC Fight Night 192 comes to the Apex in Las Vegas, positively jammed with 15 fights. At first glance, the marathon card is paper-thin; the Anthony Smith-Ryan Spann main event is the only Top 10 matchup of the evening — possibly joined by the undercard bout between Pannie Kianzad and Raquel Pennington, depending on whose rankings you’re looking at.

While “UFC Vegas 37” is light on marquee names and immediate title implications, those 15 bouts still mean a whole lot to the men and women who will be squaring off. They include several fighters who may well be competing for their roster spots, and several more formerly hot prospects who, while they may not be in immediate danger of a pink slip, desperately need a win on Saturday to retain any last vestiges of that new-car smell. Out of 30 fighters scheduled to make the walk at UFC Fight Night 192 —from the contenders to the pretenders to the wide-eyed rookies — here are three who are under extra pressure to stand and deliver.


She can check out anytime she likes, but can she ever leave? “The Queen of Violence” appeared in this column ahead of her fight with Montana De La Rosa at UFC Fight Night 189, under the headline: “Would the real UFC flyweight please stand up?” On that night in June, De La Rosa stood up emphatically, notching her first career finish via strikes at Lipski’s expense.

Needless to say, all of the same pressures that bore down on Lipski three months ago are still there, only magnified. The former KSW titleholder is now 2-4 in the Octagon, with wins over two of the lowest-level women in the division and a pair of ugly ground-and-pound losses since then. It isn’t enough simply to point out that Lipski has fallen short of expectations. That train has long since left the station, and Lipski is arguably the biggest free agent bust of the post-Pride Fighting Championships era, in terms of fighters who came to the UFC as current or recent champions of other top-level orgs.

At this point, Lipski is fighting not for any lingering prospect shine, but quite possibly her job. That’s the bad news, but there are some bits of good news to counterbalance it. Despite the fact that it feels like a decade since fans first wondered how she would do in the UFC, Lipski is still only 27 years old. There is every possibility that she can not only shore up the flaws in her game, but that she hasn’t even peaked yet as an athlete. The UFC is also showing signs that it wants to give her the time to regroup, retool and develop into the contender it thought it had signed three years ago. Exhibit A is her matchup this weekend: Mandy Bohm is a mildly intriguing prospect, a veteran of only seven professional MMA bouts despite being several years older than Lipski, and a fairly friendly stylistic matchup. It’s a sensible pairing, winnable without being a laughable softball, perfect for a fighter coming off of two bad losses.

He’s Already Made It, Ryan Spann. Can You?


Make no mistake: Spann is under more pressure this weekend than his opponent. While Smith surely wants to win his way back to another crack at the light heavyweight belt, his path forward is clear. As Smith is now an established name and face — this will be his eighth main event slot in his last nine fights — all he needs to do is win three fights in a row and hope to high heaven that the champ isn’t Jon Jones or Glover Teixeira, in which case your mom is probably ahead of him in the title queue. Otherwise, "Lionheart" can hover around the fringes of contention as a proven commodity — and it helps that he cuts so little weight that the UFC can call on him almost anytime if there’s a short-notice need.

For “Superman,” things are a little more complicated. Now 5-1 in the UFC, his only Octagon loss is a wild first-round knockout by Brazilian maniac Johnny Walker. That’s fine; Walker is always going to do that kind of thing to every third fighter he meets, and even if Walker somehow became UFC champion, his fight with Spann was tinged with enough controversy that a rematch would be an easy sell.

Spann’s real problem is that for all of his promise, and his prodigious arsenal of offensive weaponry, he still lacks a signature win in the UFC light heavyweight division. The Misha Cirkunov knockout was a brutal finish over a solid name, but Cirkunov is now 2-4 in the last four years, and may simply be washed. The win over Sam Alvey was razor-close — and in Alvey’s worse weight class. Suffice it to say that a lot hinges on the UFC Vegas 37 headliner. Smith would represent easily the best win of Spann’s career so far, and would set him apart from the likes of Devin Clark and Jimmy Crute, the fringe contenders Smith turned away in his last two appearances. Conversely, if Spann loses, he ends up in the same pool with those two. That’s a crowded place, and the road to the Top 10 from there is quite a bit rougher.


Speaking of good news and bad news, the good news for Buckley is that all four of his UFC fights have been highlight reel material, including one of the most electrifying finishes in MMA history. The bad news is that he’s 2-2 in those fights and the highlights for his opponents have been pretty impressive as well, most recently a knockout loss in January courtesy of an Alessio Di Chirico head kick.

Getting a reputation as a viral GIF waiting to happen — as Buckley has certainly done — tends to earn a fighter a lot of goodwill from the UFC. However, you’re still got to win more than you lose, and the fact remains that di Chirico came into their bout on a three-fight losing streak, was more or less a setup opponent for Buckley, and ended up kicking his head off as a nearly 3-to-1 underdog.

Enter setup opponent version 2.0, in the form of Antonio Arroyo. The burly Brazilian entered the UFC in 2019 after wins on the Brazilian as well as the US versions of Dana White's Contender Series, but since then he has fought just once per calendar year — occasionally because of his own health; usually because of his opponents pulling out — going 0-2. The main thing I remember about his losses to quietly rising contender Andre Muniz and human bowling ball Deron Winn is that the fans were booing loudly for a lot of both fights.

In other words, Arroyo presents as the polar opposite of Buckley, who will seek to live or die by the sword for the fifth time in 13 months on Saturday. For “New Mansa,” it’s another setup fight, and if he aspires to anything more in the UFC middleweight division than being an action hero and bonus magnet — not that there’s anything wrong with that — he really, really needs to win this one. If he can also somehow drag Arroyo kicking and screaming into an entertaining fight, that would be worth a gold star.