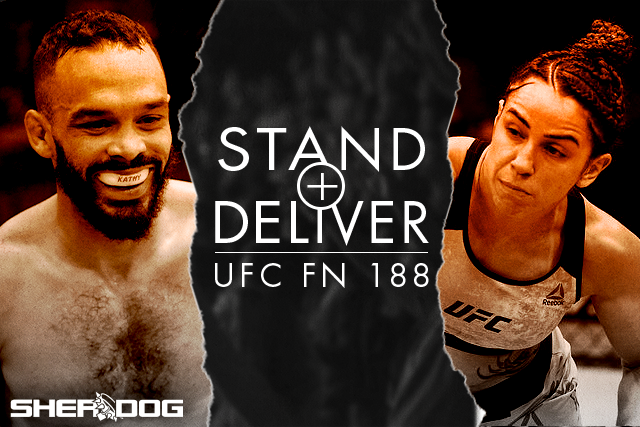 This Saturday, the Ultimate Fighting Championship returns to its familiar stomping ground of Las Vegas, as UFC Fight Night 188 takes place at the Apex. “UFC Vegas 27” features a scintillating bantamweight contenders’ match in the main event, a possible strawweight title eliminator in the co-main, and a solid mix of prospects, contenders and veterans all the way down. It received an additional boost of talent a couple of weeks ago when COVID-19 pushed the middleweight matchup between Jack Hermansson and Edmen Shahbazyan from last week’s UFC 262 to this card. While all 13 fights have plenty at stake, a few are especially crucial for one or both participants. Here are some fighters under extra pressure to stand and deliver at UFC Fight Night 188.


Font is 8-3 in the UFC, with all three losses coming against Top 10 opponents ranked higher than himself at the time. He is on a three-fight win streak over UFC contenders Marlon Moraes, Ricky Simon and your new Bellator MMA champ Sergio Pettis. So why, with such a strong résumé, are fans not marching on Washington D.C. to demand he be granted consideration as a bantamweight title challenger? It is likely because Font’s one-fight-per-year schedule allows us to forget about him a little bit. It is ironic that Font’s foe in this Saturday’s main event, Cody Garbrandt, is popularly perceived to be “back” after being “gone,” when he and Font have the exact same number of fights since 2018.

Merely by getting into the cage this weekend, Font is making strides towards remedying that problem, as this will be his shortest turnaround between fights in years. He also has a chance to address the other factor holding him back from receiving his due as a contender: lack of a signature win. Headlining over Garbrandt in his first main event makes this easily the “biggest” fight of Font’s career so far, and Garbrandt’s scintillating knockout of Raphael Assuncao in his comeback fight last summer — see, there’s that narrative again — means the former champ’s competitive value remains commensurate with his name value. The goal for Font is two-fold and bone simple: Beat Garbrandt, then stay healthy enough to fight again by the end of the year, when the title picture will hopefully have cleared a bit. Do that, and he’s right there in line for his own shot.

Who’d You Piss Off, Edmen Shahbazyan?


A year ago, “The Golden Boy” might have had the most appropriate nickname in MMA. He was a perfect 11-0, the last four of those in the UFC, including a sensational head-kick knockout of Brad Tavares in his last outing that seemed to certify him as being on the verge of crossing over from prospect to middleweight contender. At 22, he was one of the youngest fighters in the promotion, and as the favorite son of Glendale Fight Club, he had the power to conjure up Ronda Rousey on his promo reels. In other words, it appeared to be all systems go for Shahbazyan as a budding superstar, as he prepared for his first UFC main event against Derek Brunson.

That all came to a grinding halt in a third-round TKO loss for Shahbazyan, but it wasn’t all bad news, as he won a clear first round over a Top 10 fixture in Brunson. The defeat sent Shahbazyan back to the drawing board with two action items: One, he lacked the cardio to maintain his accustomed frenetic pace past the first round; and two, despite his eye-popping speed and athleticism, he just wasn’t physically strong enough to deal with a burly 185-pounder like Brunson. Both of those are fixable issues, and the latter is probably due in part to his youth. It was simply a matter of seeing how Shahbazyan would look against his next opponent.

It turns out that next opponent will be Jack Hermansson, which as a bounce-back fight feels about as kind as tossing a drowning man an anvil. Hermansson is ranked higher than Brunson, is wily, well-rounded and physically strong, and in the last four years he has lost only to Marvin Vettori, Jared Cannonier and Thiago Santos. It’s a brutally big ask for Shahbazyan. Yes, he could blitz the Swede early as a few previous opponents have, but failing that, he will need to show enormous advances in his game to prevail. It isn’t the end of the world if he loses his second straight fight — again, he’s just 23 years old — but who knows what another demoralizing loss will do to him? Rebounding from early career setbacks is the difference between Joe Lauzon and Dan Lauzon. It's the difference between Anderson Silva and Erick Silva. Here's hoping the "too much, too soon" phenomenon doesn't befall this phenom.


Dumont is 1-1 in the UFC. In her only fight at featherweight, she was flattened by Megan Anderson in minutes. She then tried dropping to bantamweight and picked up a decent win over Ashlee Evans-Smith that was marred by Evans-Smith not being very good, plus the fact that Dumont blew weight by about two steak dinners. In her next try, she missed the bantamweight limit by a whole churrascaria, leading to her fight with Erin Blanchfield being scrapped altogether. So why is “Immortal” the only hope for anything? Hell, why is she fighting for anything more than her own continued employment?

The problem is that Dumont’s opponent at UFC Fight Night 188, Felicia Spencer, is easily the second best featherweight in the UFC, but her loss to champ Amanda Nunes last summer left exactly nobody clamoring for a rematch. If Dumont defeats Spencer on Saturday, she might well get a shot at Nunes, which should tell you all you need to know about the division. If Spencer wins, watch for the UFC to close women’s featherweight down. (It is a cruel irony that Spencer, one of the few UFC featherweights who probably can’t make 135, might pull the temple down on her own head in victory.)
« Previous Next »