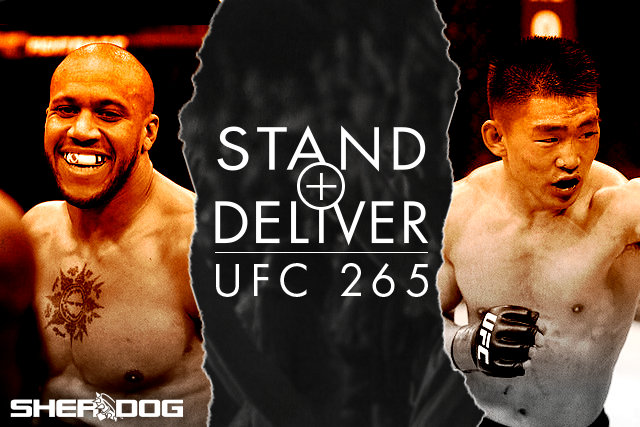 
Sign up for ESPN+ right here, and you can then stream UFC 265 live on your smart TV, computer, phone, tablet or streaming device via the ESPN app.

In some ways, a win is a win and a loss is a loss. But while it is true that every fight matters, some feel more important, for any number of reasons. In some cases, the elevated stakes are easy to define. Picture the fighter on a losing streak who knows he or she is likely fighting for their job; or conversely, any matchup on Dana White's Contender Series, where two hopefuls know that the brass ring is within their reach if they can win impressively. In other cases, a fight feels especially important for reasons that are harder to quantify, but no less real. Whether it’s the symbolic heft of being a pioneer in MMA from one’s country, or the simple added spice of two fighters who really hate each other’s guts, that fight means just a little more.

This Saturday, the Ultimate Fighting Championship returns to Houston, Texas, with UFC 265, less than three months after UFC 262 packed the very same Toyota Center. That is surprisingly soon for the UFC to revisit any city other than Las Vegas, but an even quicker turnaround is the one being undertaken by one of the names on the marquee. Ciryl Gane, who took a one-sided decision over Alexander Volkov at UFC Fight Night 190 just six weeks ago, will meet fellow heavyweight contender Derrick Lewis in an interim title fight.

The interim strap itself is utterly spurious. Undisputed champ Francis Ngannou is perfectly healthy, fought in March, and…oh right, just happens to be embroiled in a dispute with the promotion. Even if the belt is nothing but a bargaining ploy, however, the fight itself is fantastic and would have been an obvious title eliminator in any case. Considering that the presence of Lewis — unquestionably Houston’s most beloved hometown fighter — will bolster ticket sales that might otherwise have suffered from the quick turnaround, and that the card’s other, “real” title fight was scratched when Amanda Nunes came down with COVID-19, this is one time that the UFC’s boneheaded fixation with interim belts actually worked out great.

While any title fight is the highest of high-pressure situations — though not equally so for both men, more on that in a moment — there are plenty of other prospects, contenders and veterans fighting on Saturday with something extra to prove. Here are three fighters under just a little more pressure to stand and deliver at UFC 265.


Headed into Saturday’s main event, the expectations resting on “Bon Gamin” are ludicrously high. Going by the oddsmakers who initially installed him at around -300, and the bettors who have pushed that line closer to -400 during fight week, one would think this was a coronation rather than a fight. I would argue that there isn’t a heavyweight on the planet who should be a 4-to-1 favorite over Derrick Lewis, least of all a 9-0 fighter who began training less than five years ago.

On the other hand, it’s easy to see why the 31-year-old Frenchman is the target of such enthusiasm. Gane has cut a swath through the UFC heavyweight division, winning six straight fights over increasingly strong opposition and showing a stunningly evolved and well-rounded skill set for such a relative newcomer. He has elite physical tools. He has the fight IQ and poise of a man with twice his experience. And like earlier-generation greats such as Andrei Arlovski and Mirko Filipovic, the chiseled 6-foot-5 Gane frankly looks like the average fan expects a heavyweight champ to look.

It’s entirely possible that Gane will be undisputed UFC heavyweight champion a few months from now and hold that belt for a long time. However, he is facing a man in Lewis who is extremely unlikely to repeat the deer-in-headlights act put on by Gane’s last two opponents, Alexander Volkov and Jairzinho Rozenstruik. “The Black Beast” will not go away unless he’s put away, and will be literally one punch away from ending the fight for as long as it goes. Gane has gotten as far as he has by being composed and nearly perfect so far. On Saturday, in front of thousands of people screaming for him to fail, he’ll have to be.


The gap in raw physical prowess between Alonzo Menifield and his opponent on Saturday, Ed Herman, will be one of the biggest in the history of high-level MMA. Menifield looks like an NFL strong safety and hits like a truck. Herman will be 41 in two months, was one of the slowest fighters in the UFC even in his prime, and spent most of his career at middleweight. It’s not too surprising that Menifield is a -275 favorite over Herman, despite the grizzled veteran’s unlikely three-fight winning streak.

However, Menifield is just one win removed from a deflating two-fight skid in which he gassed out badly against Devin Clark and lost a back-and-forth firefight against Ovince St. Preux. If not for a quick and brutal win over a short-notice debuting Fabio Cherant in his last fight, Menifield might not be on UFC roster right now. If he is going to make good on his prospect promise, he needs to show he can find ways to beat the fighters he can’t just run over in two minutes. Herman is a glaring trap fight, as he remains hard to finish, still has decent cardio, and his ground game is as underrated as Menifield’s is untested. It will be interested to see whether Menifield tries to get “Short Fuse” out of there in short order, or takes a more measured approach on the assumption that he will need three rounds of gas.

Fork in the Road: Casey Kenney vs. Yadong Song


This is the kind of fight that will define both of these men’s careers for the next several years. Right now, both bantamweight up-and-comers are still in a decent place despite having lost their last fight. Kenney dropped a split decision to former champ Dominick Cruz back in March, snapping a three-fight winning streak, but the main story coming out of that fight was how good Cruz looked. Song’s loss to Kyler Phillips on the same card was the first UFC defeat for “Kung Fu Monkey,” but it’s a loss that will probably not age too badly over the next year or two if Phillips continues to do well.

What neither of these men can afford is a second loss in a row. That sounds like an obvious statement — of course nobody wants to lose two fights in a row — but the UFC bantamweight division is quickly becoming almost as unforgiving as the three weight classes above it. Consider that Merab Dvalishvili, who is on a six-fight win streak in the division that should really be seven, is on the outskirts of our bantamweight Top 15, and you can see how far even one win can set a prospect back.