The first period saw both men sniping at each other on the feet, but it was Namekawa that got after the pro-wrestling convert with a takedown and then punched from the top in the guard before dropping back for an ankle lock. Shibata shucked Namekawa off, however, and brought the fight back to standing. To each other’s surprise, both men then struck each other with simultaneous spinning back kicks.

Namekawa captured a single-leg early in the second stanza and slowly advanced from side mount to full mount, where he attempted to punish with punches. A game Shibata returned fire from bottom, prompting Namekawa to set up a sloppy armbar. Shibata pulled out and reversed with ease, taking Namekawa’s back to deliver heavy hooks and uppercuts to Namekawa’s face from behind.

Namekawa started the third round with takedowns as well, but very little action followed. With both men splitting a round apiece, all three judges ruled the bout a draw.

In the semi-main event, Ryuta Sakurai took a contentious split decision over Sojiro Orui. While Sakurai was better on the feet, most of the fight took place on the ground with Orui scoring takedowns and punches from the top. Aside from a Sakurai reversal into mount to end with ground-and-pound in the last 10 seconds of the second round, Orui arguably deserved the decision. Surprisingly, however, two judges ruled the bout for Sakurai, with only one judge ruling it for Orui.

Megaton grand prix champion Yusuke Kawaguchi blitzed Mongolian import Seryu with machinegun punches in the first round of their open-weight bout but could not finish him. With both hulks gassed by the second period, the fight quickly devolved into moments of sloppy punching and leaning on each other in the clinch. A majority decision for Kawaguchi resulted after two judges ruled in his favor, with one judge ruling it a draw. 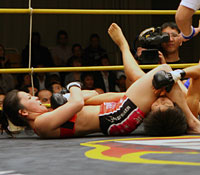 Daniel Herbertson/Sherdog.com
Satoko Shinashi submits Yukiko
Seki with an armbar.
After eating a few punches from Yukiko Seki, Deep flyweight women’s champ Satoko Shinashi charged in for a takedown. In the ensuing scramble, Shinashi was able to pull off a quick armbar victory at 1:30 in the first round.

EliteXC veteran Riki Fukuda won a dominant decision in his bout with Dutch prospect Jason Jones. Fukuda scored multiple takedowns and transitioned to Jones’ back, where he delivered punches while working for a choke through much of the first round.

Jones lost the back position to Fukuda yet again in the second round before jumping up and diving headfirst into the canvas in an attempt to shake the Japanese fighter. Later, Jones momentarily took top in guard to deliver some ground-and-pound of his own, but Fukuda immediately scrambled back to his feet to take Jones down yet again.

Jones got one last reversal in the final seconds of the round. He did not stop punching after the bell, however, prompting officials and cornermen from both sides to charge into the ring. One angry audience member threw an ice-filled cup into the ring in protest.

Despite Fukuda kicking at Jones in retaliation, cooler heads soon prevailed, and Jones paid his respects to Fukuda after seeing his hand raised. 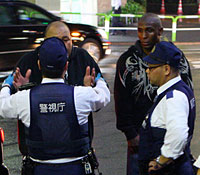 Daniel Herbertson/Sherdog.com
Jason Jones was reportedly
involved in an altercation
with an angry fan outside
the venue after the event.
“I wasn’t reacting as I should have on the [takedowns]. He surprised me a little with the low shots, but he won the fight fair and square,” Jones said.

The late show of respect did not appear to appease everyone, however, as Jones was reportedly involved in an altercation with an angry fan outside the venue just after the event wrapped.

Fighting opponents two weight classes above his own has never deterred AACC sparkplug Takafumi Otsuka from bringing the fight to his heavier and often taller opposition. En route to winning an exciting split decision over ZST import Masanori Kanehara, Otsuka lunged for punches and kicks before shooting in for the takedown. Taking the top in guard and in the mount, Otsuka spent just as much time keeping Kanehara under him as delivering ground-and-pound throughout the two rounds.

“I had the wrong game plan,” Thoresen said. “It was trying to knock him out standing, and if not, just sprawl on him, but it didn’t work out so well.”

After taking Thoresen down at will, Ishikawa peppered him with shots from inside the Norwegian’s guard and avoided every attempt made by Thoresen for armbars and triangles.

“He kept Simeon down with good control in guard, stressing Simeon out, making him try too many submission attempts,” said Dream lightweight champion Joachim Hansen of Thoresen, his fighter. “Simeon won most of his fights by submission before, so he got stuck in that submission mode instead of trying to kick him away and use his feet to get some distance.”

Thoresen’s only moment came in the final seconds of the second round, when after finally stuffing a takedown attempt, he took Ishikawa’s back and punched at the side of his head. The damage was done, however, as two judges ruled the bout for Ishikawa, with the remaining judge ruling the bout a draw.

“I need to train more wrestling so I can decide more on where the fight ends up,” Thoresen said. “I’ll be back stronger.”