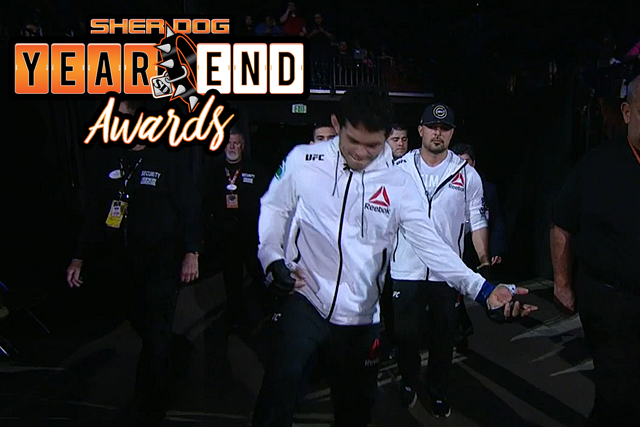 What’s in a walkout song? Every fighter can choose one, or in some cases a mashup, when they make their walk to the cage or the ring. Some fighters pick their song because it energizes them, others do it in honor of somebody and occasionally a song is selected to catch their opponent off guard. Walkout songs can be iconic; think of Anderson Silva walking out to the cage with "No Sunshine" by DMX playing in the background, or Wanderlei Silva and his staple of Darude’s "Sandstorm," or even Donald Cerrone’s favorite song, "Cowboy" by Kid Rock.

Not every walkout song is created equal, and some have more of an impact than others. It is not just one element that makes a walkout stand out, whether it is heavy-hitting, catchy or something where the crowd can sing along. Winning the crowd over is often something fighters attempt to do with their song, like Darren Till electing to use "Sweet Caroline" by Neil Diamond in both of his 2018 appearances, and look no further than any UFC event held in Boston; before the night is over, someone will walk out to "I'm Shipping Up to Boston" by the Dropkick Murphys.

There were many notable walkouts this year that deserve mentioning, spread out across promotions around the world. Perhaps the most emotional walkout of the year came when Miyuu Yamamoto, older sister of recently departed MMA legend Norifumi "Kid" Yamamoto, opted to compete less than two weeks after he passed. When making her way to the ring at Rizin 13 in September, there was nary a dry eye in the Saitama Super Arena as "Kid’s" song, "I Believe" by T.O.K. played in the arena, which then transitioned into her own choice of "Ready or Not" by The Fugees. Our esteemed colleague Jordan Breen in particular took note of this moment that night. Not to be outdone by her choice in music, Yamamoto went on to win a dominant decision over Andy Nguyen.

Several other walkouts this year also received near-universal praise, including Tito Ortiz turning back the clock to pick the second song he ever selected from UFC 32 in 2001, Limp Bizkit's "Break Stuff," before he knocked out old rival Chuck Liddell at Golden Boy MMA. Also, a frequent walkout artist for UFC strawweight champ Rose Namajunas, Run the Jewels, played during a UFC event for the first time in two years, when Dan Ige walked out to "Rubble Kings Theme (Dynamite)" at UFC on Fox 31 and won a decision over Jordan Griffin. In a proud moment, Ilima-Lei Macfarlane defended her flyweight belt at Bellator 213 in her home state of Hawaii for the first time, emotionally emerging to "All Hawaii Stand Together" originally written by Liko Martin. While all powerful songs and great choices, one fighter in the UFC made a song selection above and beyond the rest. Enter Carlos Diego Ferreira.

Former Legacy Fighting Championship lightweight champ Carlos Diego Ferreira started off his UFC career with four uses of "Strong Enough" by Matthew West in 2014 and 2015, winning the first two but dropping the next two. After those losses, he changed his walkout song to "Twist and Shout" as covered The Beatles, and topped Olivier Aubin-Mercier on the scorecards in 2016.

After beating Aubin-Mercier, he was slated to face Abel Trujillo that May but disclosed that he was taking 7-keto-DHEA, and then tested positive for Ostarine, which earned him a lengthy suspension. During his suspension, he was given ample time to reflect on a walkout song that truly represented him as a fighter. With that, he chose "Footloose" by Kenny Loggins.

Released as a single following the release of the film "Footloose" in January 1984, the song "Footloose" hit the top of the charts for a few weeks. In 1985, it was nominated for an Academy Award for the Best Original Song, ultimately losing to Stevie Wonder. Many years later, The American Film Institute released a list of the top 100 songs from American films across the 1900s, and "Footloose" ranked at 96, above hits like "Hakuna Matata" from the "Lion King" and Bob Seger’s "Old Time Rock and Roll" as featured in "Risky Business." Additionally, the National Recording Registry selected the song in 2018 for preservation by the Library of Congress for its significance and historical impact.

At UFC Fight Night 126 in February, before their lightweight clash, Ferreira and his opponent Jared Gordon engaged in one of the most entertaining walkout song battles we’ve ever seen. First up was Ferreira, who caught the commentary booth briefly off guard, playing air guitar and actually dancing to the Octagon, grinning the entire time. His smile infectious, even traditionally stoic figures like Texas Department of Licensing and Regulation officials, as well as UFC cutmen Brad Tate and Teddy Lucio, couldn’t help from smiling and laughing that this song of all songs was playing.

Gordon, who holds the nickname of "Flash," also made an outstanding walkout song choice of his own with Queen’s "Flash." During his own entrance, Gordon was much more intense and focused, and he did not outwardly appear to be as energized by his choice of music as Ferreira. After the dust settled, in less than two minutes, Ferreira dropped and finished Gordon by first-round knockout.

Capitalizing on his success, Ferreira again competed at UFC 231 in December, meeting short notice replacement Kyle Nelson. His competitor Nelson chose a fairly frequently used "Coming Home" by Diddy - Dirty Money ft. Skylar Grey, which might have meant a lot to a Canadian fighting in his home country, but did not look to have the same effect as his opponent’s song. During Ferreira’s walkout, UFC commentator Joe Rogan accurately remarked on the song during the broadcast, saying "…he might be the first guy to ever walk into the cage to Footloose."

In their bout, Ferreira survived a difficult first few minutes against Nelson but surged to pummel his opponent and score a second round knockout. It has been mentioned before and still holds true today: every recorded fighter to walk out to a Kenny Loggins song throughout UFC history has won their fight.

Perhaps someone else’s words may do this song justice: Peter Quill, played by Chris Pratt in the film "Guardians of the Galaxy," who said, "Well, on my planet, we have a legend about people like you. It's called Footloose. And in it, a great hero, named Kevin Bacon, teaches an entire city full of people with sticks up their butts that, dancing, well, is the greatest thing there is." With Ferreira’s combined emotion, success and creativity to choose that song instead of countless others, "Footloose" by Kenny Loggins is Sherdog.com’s 2018 "Walkout Song of the Year."