We didn't get there without a little controversy, but the Professional Fighters League 2021 featherweight final will feature two of the promotion’s most prolific and accomplished fighters.

The semifinal between No. 1 seed Brendan Loughnane and No. 4 seed Movlid Khaybulaev was characterized by a dominant first two rounds for the undefeated Dagestani, followed by a spirited third-round comeback on the part of Loughnane. What appeared to be a very straightforward win by Khaybulaev was marred by a head-scratching scorecard for the Brit, but the split decision is still good enough to propel him to the finals.

There, he will meet No. 2 seed Chris Wade, a veteran of all three PFL seasons to date and one of its most consistently competitive fighters. Wade’s decision to drop to featherweight after two solid runs at 155 pounds has paid off, as he used strength, athleticism and grappling acumen to nullify the vaunted wrestling of Bubba Jenkins for three rounds of scramble-heavy madness. There was no dissenting scorecard this time, and Wade will meet Khaybulaev on Oct. 27 with bragging rights and a $1 million purse on the line. 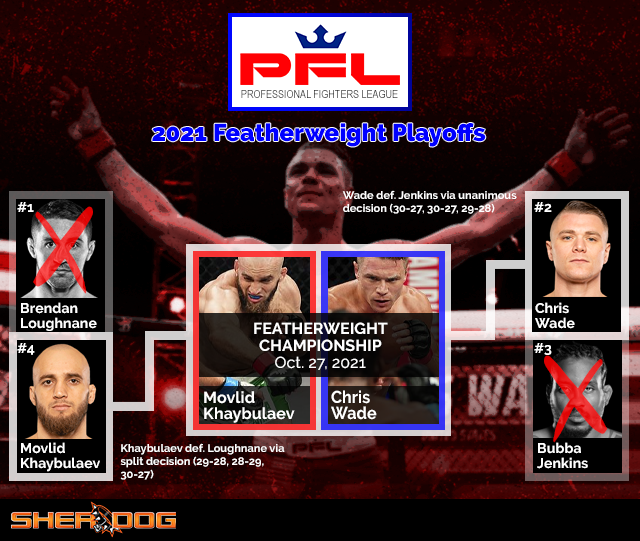