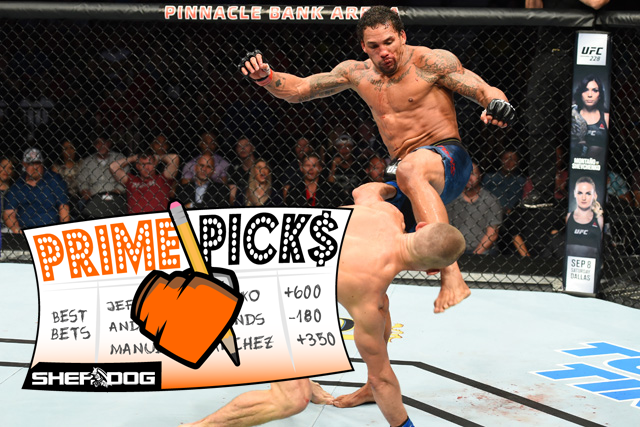 The under-the-radar UFC Fight Night 137 event takes place Saturday night at Ginasio do Ibirapuera in Sao Paulo, Brazil. The card has undergone several changes, including in the main event, but there remains a number of intriguing matchups on this card for fans to look forward to. The card features some nice betting opportunities to take a look at as well, and here are some plays to consider in the UFC Sao Paulo edition of Prime Picks:


I was getting ready to bet on Thiago Santos over Jimi Manuwa, but this is mixed martial arts and injuries always seem to wreak havoc. Just a few days before the event, Manuwa pulled out with an injury. Thankfully, the Ultimate Fighting Championship was able to get Eryk Anders to come in on short notice and save the card. And what a fight this is. This is a very intriguing matchup and somehow we may have ended up with a better main event after all. I’m very intrigued by how both Anders and Santos will look at 205. For Santos, he recently announced his intention to move up to light heavyweight after his win over Kevin Holland in the summer, and I love the move for him. Like Anthony Smith, I believe Santos will be more effective at light heavyweight because he should be more durable and have better cardio. We already know he has devastating knockout power and if he can carry that up to 205, he can be an instant title contender in a shallow division. Having said that, this could potentially be a good move for Anders as well, even if it’s a one-off.

Anders has looked amazing in the UFC thus far, with a brutal KO of Tim Williams just a few weeks ago being his shining moment in the Octagon. Save for a controversial split decision loss to Lyoto Machida, Anders would be undefeated. He’s a big middleweight as well as a tremendous athlete, and the move for this bout could be a blessing in disguise. It’s possible Anders could have a quicker path to a title shot at light heavyweight than in the stacked middleweight division. Of course, he has to go out there and beat Santos first, and that won’t be easy, but I believe he can win this fight. Yes, Santos has legit knockout power, but Anders is more durable, has the better cardio and is the better wrestler. I don’t like the fact he is fighting on such short notice but he should still be in great shape still since he just had a fight. If this was a middleweight fight I would pick Anders and I’ll take him in this light heavyweight fight, too. At plus money, I like Anders as the underdog.


I was surprised when the UFC booked Sam Alvey against Antonio Rogerio Nogueira in Brazil. Alvey is on a two-fight win streak since moving up to 205 and looks like he might be a dark-horse contender in his new weight class. On the other hand, Nogueira is 42 years-old, hasn’t fought since a TKO loss to Ryan Bader in 2016, and has just one win in the last five years (a TKO win over the chinny Pat Cummins). I just don’t understand why the UFC wants Alvey to fly to Brazil to knock out a legend, but that’s exactly what I think happens here. Alvey is one of the most underappreciated knockout artists in the UFC and since moving up to light heavyweight he appears to be more durable and have a better gas tank. He should have no problem catching Nogueira within the three rounds and potentially finish him in highlight-reel fashion. At these odds, Alvey is nice a parlay piece.


Another underdog to consider is UFC newcomer Andre Ewell, who takes on Renan Barao. I think this is another fight where you have to fade Barao. The former UFC bantamweight champion is a shell of the former fighter he was. He’s lost four of his last five fights including a disappointing decision loss to Brian Kelleher in his last outing. His only win since 2014 came against Phillipe Nover, and that’s not a quality win in my books. It’s hard to say why Barao fell from grace so hard, but based on his last few performances, he looks washed up at age 31.

Enter Ewell. The former CES MMA bantamweight champion is on a four-fight win streak and overall he has won eight of his last nine, including a finish over former UFC flyweight Willie Gates in a King of the Cage clash. Ewell is 30 so he’s not a young buck, but he’s a late bloomer as he started his pro career in 2015. Ewell opened as a significantly bigger underdog before the line dropped, as many bettors are on the same page here with the fading Barao. But he’s still an underdog and as long as he is I think this is a good opportunity to get Ewell at plus money.


Another favorite I really like to win is Augusto Sakai, who fights Chase Sherman in a heavyweight contest. Again, it’s a case of fading a fighter as I think you have to bet against Sherman in this spot. “The Vanilla Gorilla” is just 2-4 in the UFC and was dominated in his last two fights by Justin Willis and Shamil Abdurakhimov. He’s an entertaining guy to watch, but he just isn’t UFC-caliber because he gets punched too much and he can’t stop a takedown. That’s going to be a problem against Sakai, who is a very well-rounded mixed martial artist. Sakai was cut by Bellator MMA after an ugly loss to Cheick Kongo, but being released has really motivated him as he’s won his last two fights via finish. That includes a knockout win on Dana White’s Contender Series Brazil in his last outing. Sakai has a wealth of experience fighting solid opposition in Bellator and I think this fight against Sherman in his home country is a great opportunity for him to show off his skills. I think Sakai has a very good chance to win this fight by knockout, or at least grind out a decision. He makes great parlay material at this current betting line.