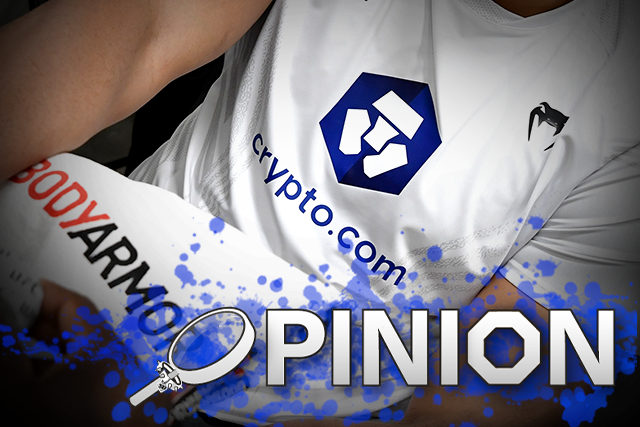 Only two weeks ago, I wrote about how the Ultimate Fighting Championship had spit upon two of its champions and biggest stars, Francis Ngannou and Jon Jones. To the promotion's credit, it sought to correct that injustice. With its recently announced Crypto.com sponsorship, not only did the promotion spit upon its entire roster, but fans as well. The UFC has truly outdone itself, achieving a shameful new low since the Reebok deal ended individual fighter sponsors in 2016. Certainly, this is not as destructive, but it wantonly screws over the fighters and laughs at them even harder, while extending that same attitude towards the fans. Are you reading this rolling your eyes, thinking that I'm being hyperbolic? Let's examine the details.

There was much celebration about the $175 million over 10 years that the UFC will receive from Crypto.com. This was seen as positive, showing how much MMA as a whole has grown. However, what percentage of this is going to the fighters? As Ariel Helwani recently revealed in an interview, the answer is zero.

That's right, not a single red cent. Remember when fighters were banned from having individual sponsors, and Dana White fervently argued they would make more eventually through company-wide ones? Even back then, everyone realized it was utter nonsense, a bald-faced pack of lies. Hell, many Top 5, headlining fighters, among them Gegard Mousasi, Ryan Bader and Rory MacDonald, soon defected to Bellator MMA, since they could make far more money thanks to their own sponsors. However, at the very least, Reebok paid the fighters something. It was a relatively paltry amount, with martial artists making $2500 per bout for their first five UFC appearances, $5000 per bout for the next five, and even champions receiving just $40,000. In most cases, this was massively less than they would make otherwise, but at least there was a hypothetical argument that those who didn't bother getting sponsors, or were exceptionally bad at doing so, would make the same or more. No such argument is possible with Crypto.com. Despite their logo adorning the front of each fighter's shirt, the men and women who put their bodies, health and souls on the line inside the Octagon make absolutely nothing from it. This isn't just the UFC taking an absurd, unfair percentage of the revenue, such as the current 80%. This is taking every last penny, 100%, of a revenue source the fighters previously had, and which they, not Dana White, are promoting. It's outright theft. That $175 million isn't going to the men and women who leave parts of themselves in the cage, but to Endeavor execs and White, among others. Maybe he will spend some of those millions on yet another mansion, another $1 million birthday party for one of his kids, another losing $1 million boxing bet, or simply the blackjack table? Clearly a development worth celebrating.

But this goes even further, even managing to insult the UFC's own loyal fans. Remember one of the UFC narratives back in 2016, claiming many individual fighter sponsors were low-class, embarrassing, and unvetted? The classic example was Condom Depot. I've always found this puzzling. Condoms serve an important purpose, protecting against disease and unwanted pregnancies. It's a tangible, useful product one gets in exchange for money. Compare that to what the UFC is peddling with Crypto.com. Now, to begin with, crypto speculation, much like the stock market or the sportsbooks the UFC also advertises, is a form of gambling. You invest in a currency, company, or fighter, and hope that they succeed, making you money. If they don't, you lose money.

However, there is a vital difference with crypto speculation. With the tremendous, runaway success of Bitcoin, many new cryptocurrencies have sprung up overnight to meet investor demand. Most of these are either poorly designed or outright scams. Now, Crypto.com proudly boasts that they offer over 100 cryptocurrencies. As a mathematical economist who has studied cryptocurrencies and talked to many other scientists and researchers about the subject, I can tell you that there are nowhere close to 100 legitimate, well-designed cryptocurrencies in the entire world today. In fact, I doubt there are even 20. Essentially, that means over 80% of the currencies offered on the website are pure trash, with no chance of long-term growth.

When one talks about low-class, embarrassing, and poorly vetted, I can't think of a worse example than Crypto.com in the entire history of UFC sponsors. Naturally, the record-breaking amount they paid helped assuage any moral qualms. One feels sorry for any fan of the UFC who decides to use the exchange, and isn't among the very tiny percentage who can profit from it. Especially since many are investing large sums into cryptocurrencies, far more than they put into sports betting.

The UFC's new sponsorship has led to an interesting state of affairs. The fighters make no additional money. The fans stand to lose money if they engage. And the UFC executives continue raking in record profits while laughing about it.
« Previous Next »