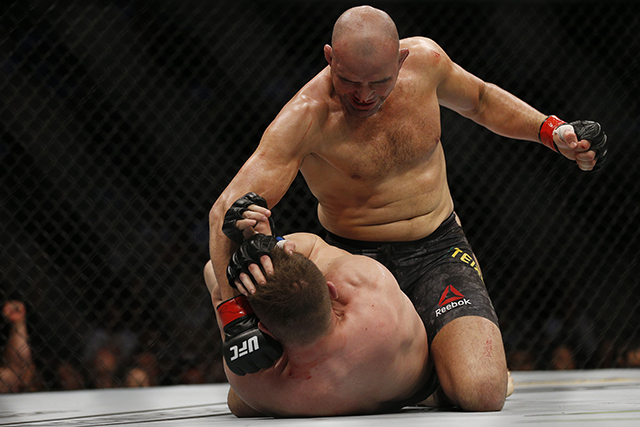 The most recent Ultimate Fighting Championship card this past weekend, headlined by Glover Teixeira and Thiago Santos, provided us with not one, but two examples of the same inspiring phenomenon. Two men in their early forties, with badly withered physical abilities, including slow, malfunctioning reactions and weak, crumbling chins, defeated much stronger, faster, and younger opponents, foes who, on a purely physical level, should have wiped the floor with them. How the hell did they do it? By employing the deadliest weapon of all—the human mind!

I've mentioned the importance of intelligence at the highest levels of fighting before, but it's taken to a dizzying level by Teixeira and co-main event winner Andrei Arlovski. Let's first consider the former UFC heavyweight champion. In his heyday, Arlovski was a devastating striker, firing off beautiful, pinpoint accurate combinations that were as shockingly fast as they were brutally powerful. He would stalk opponents, looking for an opening and always going for the finish.

However, two realities served to change this. First, his chin was very weak. When Arlovski would get into an exchange of punches, even if he was getting the better of them, he would frequently end up knocked out while his opponent was still standing. This was obvious as early as his fight against Pedro Rizzo at UFC 36, but became more prominent over the years, with the most heartbreaking example coming at UFC 59 in his second fight against Tim Sylvia, in which he lost the title. Neither age nor a stunning 11 knockout losses have improved this.

Second, and perhaps more importantly, a combination of age and head trauma have slowed Arlovski's reactions badly, the same reactions he used to land quick, precise blows in his physical prime. Nowadays, his strikes are slower, uncertain and frequently off the mark. This is evident in his bouts and particularly familiar to any fans of boxing, recalling memories of many washed-up pugilists.

Arlovski is still capable of landing powerful blows. He simply needs an opponent as badly slowed down by age as himself, such as his rematch with Ben Rothwell in July of 2019. There, Arlovski was landing and hurting his opponent in a manner comparable to his fights over a decade earlier. It was just happening in relative slow motion.

So how does Arlovski win against younger opponents with better chins and faster reactions? He can't fight the way he used to. When he does, even against foes that leave giant defensive holes he would have used to easily knock out in his prime, like Tai Tuivasa at UFC 225, he ends up the loser. So for the past couple of years, Arlovski has had to develop a brand-new fighting style. Rather than engaging directly, he is always on the move, circling, retreating, and otherwise avoiding a toe-to-toe battle. He throws far fewer punches, and never in a situation where he could conceivably be countered. He also throws more kicks, and in a wide variety of situations to keep the opponent off-balance. The match turns into a glorified point-fighting contest, but one that Arlovski is still capable of winning.

It takes a great fighting mind to fight in such a radically different manner as one approaches 40, and even more intelligence to embrace and be so successful at it. All of this was on display against the younger, faster Tanner Boser. Boser himself is generally a more cautious fighter who likes to circle, relying on leg kicks and the occasional overhand right. However, he had evolved recently, throwing more combinations, leading to finishes against Philipe Lins and Raphael Pessoa.

Arlovski's goal was to lull Boser back into bad habits, convincing his opponent to fight in the same manner as when he was losing close decisions in Absolute Championship Berkut a few years ago. He did so by refusing to do much of anything for most of Round 1, forcing Boser to come forward and create openings himself. Boser was clearly uncomfortable with this, as even previous opponents Lins and Pessoa had presented Boser opportunities with their own striking. Thus, Boser reverted back to a more passive form of fighting. Nevertheless, Boser ended up winning Round 1.

However, it was a different story in Round 2, where fighters, no matter how young, all end up slowing down, and have to rely more on technique rather than explosiveness. There, Arlovski's craft and tactical decision-making allowed him to cautiously land kicks and the occasional punch to edge out a round where Boser looked lost.

With the mulleted Canadian confused, Arlovski became slightly more comfortable throwing his punches in the final round, but not overly so. At one point, Trevor Wittman, providing color commentary for the UFC booth from his perspective as a high-level coach, criticized Arlovski, stating that he was “too wise” and should just let his hands go. While I have the highest respect for Wittman, he was severely underestimating how diminished Arlovski's reactions are. Had he started to throw combinations instead of solitary punches, and staying more in the pocket, he would have put himself at considerable risk of eating an overhand right. As it is, the fight ended, and Arlovski won two out of three rounds and a deserved unanimous decision over an opponent with superior physical tools.

But great fighters maximizing what's left of their declined bodies doesn't necessarily mean being boring. For proof of that, look at Teixeira's performance in the main event. Once a fearsome striker, with some of the best boxing in all of MMA, and an iron chin that could shrug off almost any blow, Teixeira's beard and reactions have crumbled badly in recent years. While not as severe as Arlovski's decline, Teixeira now regularly gets hurt when striking with younger opponents, beginning with Karl Roberson very nearly knocking him out at UFC Fight Night 143 last January. And while his boxing is still decent, he just looks slow nowadays, as if he is a couple of steps behind.

Teixeira has dealt with this in two ways. Against Anthony Smith, he utilized his boxing while his opponent was against the fence, nullifying much of his speed disadvantage. Against Santos, as with previous younger rivals, he relied on his wrestling and brutal top game. Again, it's not easy to change styles and work on new skills this late into one's career, as evinced by many once-great fighters who sputter and fail as their physical abilities diminish. However, in Teixeira's case, not only does he have an excellent mind, but also the heart and toughness of the bravest warrior.

After being very nearly knocked out early in Round 1, a staggering, clinching Glover realized that he could take Santos down. Part of that may be due to Santos' recent reconstructive knee surgeries, as his takedown defense had never looked that weak. But regardless of the reasons, once there, Teixeira showed all the skill and cunning of a man who has been fighting professionally for over 18 years. Rather than rushing anything and going for the quick submission as he had against a poor grappler like Roberson, or an Ion Cutelaba with poor cardio, Teixeira instead systematically beat Santos up.

Despite most likely being concussed from the blows he had taken in Round 1, Teixeira immediately grappled to begin Round 2 and was rewarded with an easy takedown and a dominant 10-8 round where he attained a rear-naked choke right as time expired. The danger was far from over, however, as after finally stuffing a takedown to begin Round 3, Santos again had Teixeira knocked down and very nearly out. Amazingly, despite being unable to stand, Teixeira had the presence of mind to pull guard and draw Santos into a ground battle.

The younger Brazilian went along, which turned out to be a fatal mistake, as soon after Teixeira recovered, he managed to scramble up and drag Santos down. Correctly sensing his opponent was tired and sufficiently softened up from the previous two rounds, Teixeira went for the kill, finishing with a rear-naked choke to extend his improbable five-fight winning streak. All of Teixeira’s victims during that stretch have been much younger and more physically gifted, and Teixeira wasn't clearly favored against any of them. But the one attribute everyone had underestimated was the one not immediately obvious from simply looking at his punches, kicks or movement: the power of his mind.
« Previous Next »