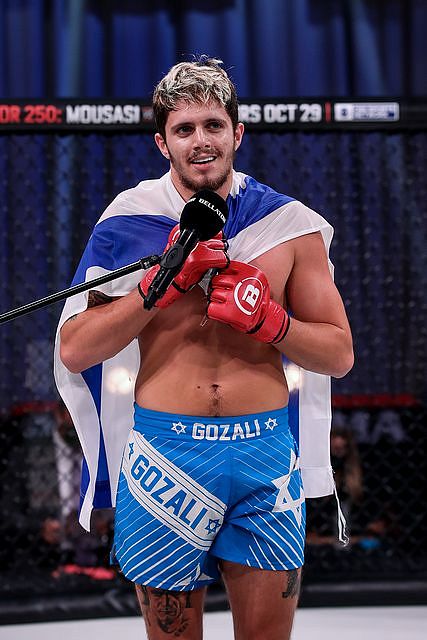 Bellator 249 served as a lesson on how to develop a young prospect versus how not to. On one hand, you had Aviv Gozali. Despite training in the martial arts since he was practically a baby and showing oodles of talent as a grappling savant, his progression in the sport has been well-planned and methodical. Originally debuting at Bellator 209 when he was still only 17, Aviv was matched with an 18-year-old opponent who was also making his professional debut and had a body belonging to boy rather than a man.

From there, Gozali slowly but surely raised his level of competition. His second opponent was 28 with an adult's physique, but was also making his professional debut and fighting two weight classes higher than normal. His third nemesis was a legitimate lightweight and had a number of actual wins, even starting his career at a promising 7-1, although he was on a seven-fight skid when he was tapped in 11 seconds by the Israeli. His fourth foe had a respectable 14-8 record, albeit mostly against weak opposition, and Aviv's short-notice victim at Bellator 249, Logan Neal, was 1-0 with an extensive amateur record.

Laugh and dismiss it if you want, but that is how prospects should be developed. At only 19 years old, there is no rush, and plenty of time to challenge harder martial artists. Each opponent has been better than the last, but only marginally. Despite his ostentatious personality, Aviv himself recognized this in his postfight interview, stating that unlike most fighters in Bellator MMA and the Ultimate Fighting Championship, he didn't want to get back in the cage as soon as possible, but would rather continue to improve his skills. He rightly saw no need to jump in against superior foes before he is ready.

If one has any doubts on the matter, heed the example of Mike Kimbel, who was fighting on the same card. Like Aviv, Kimbel has a bunch of raw talent, but his career path hasn't been as smooth. After a rocky 4-4 amateur career, he debuted at the age of 21 with two fantastic knockouts in Bellator, the latter in six seconds, showcasing phenomenal athleticism, good hand speed and a murderous right hand. However, Kimbel was still missing many skills necessary to be a successful mixed martial artist.

Rather than slowly allowing him to amass these abilities, Kimbel was thrown in with a very capable third opponent, John Douma, who was 3-1 and, at 22 years old, improving himself. Early on, Kimbel looked as though he would overwhelm Douma with strikes, as he had previous his victims. Only Douma wouldn't go away so easily, and wrapped up a triangle choke that Kimble tried to escape using athleticism rather than technique, slamming his foe and only making the submission tighter, being forced to tap out.

At first, it seemed that Kimbel and his coaches had learned their lesson from this setback. Kimbel's fourth opponent, Sebastian Ruiz, was a noticeable step down in quality and Kimbel comfortably won all three rounds, despite one of the worst scorecards in MMA history by Chris Lee claiming Ruiz was the victor. Kimbel lost again in his fifth fight, but that was not because the opponent was significantly better, but merely an obvious deficiency in his ground game that was exposed.

At 3-2, coming off a first-round TKO loss to a 3-3 opponent, whom did the 23-year-old Kimbel face? Da'Mon Blackshear, a 7-3 fighter who is not only miles better than anyone else Kimbel had fought, but a very tough, solid martial artist, period. Blackshear had even battled favorably with a few UFC names, going 1-1 against Tony Gravely in the amateurs on a pair of decisions and choking out Aalon Cruz. At only 26, Blackshear is getting better, as well.

Kimbel did well for a while, showing significant improvement since his last outing over a year ago. Through the first nine minutes, I even had Kimbel slightly winning the striking while managing to defend against Blackshear's lone takedown attempt. But Blackshear was smart and patient, a combination Kimbel likely hadn't seen in his career until then. He waited until late in Round 2 to go for his next takedown, and adjusted his single-leg based on the initial unsuccessful attempt. This time, it worked, and Kimbel again showed his grappling deficiency when Blackshear immediately tapped him with a rear-naked choke.

The matchmaking leaves me scratching my head. If Kimbel succumbed to a very average, basic grappler on the ground in his last fight, why would one then thrust him into the cage against a man who is far better there in Blackshear? Thanks in large part to poor decisions by himself and his team, Kimbel is at 3-3 and his confidence, especially in his grappling, has to be very low.

Sometimes, too much too soon can wreak havoc on a young fighter's development and skills as well. Consider a more high-profile Bellator fighter in Aaron Pico. While he might have been one of the most skilled fighters in MMA history when he made his pro debut, being an Olympic-level wrestling talent and an excellent boxer, he was still only 20 years old, facing a solid veteran in 8-2 Zach Freeman, whose last fight had been a main event decision loss to Thiago Moises, who is presently doing very well for himself in the UFC.

Pico lost that fight, and wisely lowered his level of opposition for a while. Then, after three sensational highlight-reel knockouts, at only 3-1 and 22 years old, he decided to challenge some of the best fighters Bellator had to offer. Pico is so ridiculously, disgustingly talented, that for a while this actually worked. When he fought 18-4 Leandro Higo, an excellent grappler and solid striker with a number of legitimate victories on his ledger including dominant wins over UFC veterans Steven Peterson and Terrion Ware, Pico nullified his grappling and brutalized him with punches, stopping him three minutes into the first round. But Higo, for all his abilities, is not a big hitter and was coming up to featherweight from his usual bantamweight.

Pico's next opponent, Henry Corrales, was not only a far more dangerous striker and a natural 145-pounder, but an insanely tough man, having once finished a match in which half his teeth had been knocked out. After Pico had Corrales badly hurt early, the younger man tried too hard to seal the finish, similar to what he had done against previous victims. But Corrales was not like those past opponents, and when Pico left his chin wide open, he made him pay dearly by knocking him out.

This second early loss put Pico in a tailspin. He changed camps from Team Bodyshop to Jackson-Wink and completely reworked his entire MMA style, going from a dynamic striker to a more traditional wrestler utilizing ground-and-pound. I consider this a very questionable change; modern MMA has evolved far beyond the point where a dominant wrestler can easily and safely defeat opponents that way. Not unless they have a whole suite of other unique talents, like a Khabib.

The choice for Pico's next opponent was also very curious: a fellow prospect in 25 year-old Adam Borics, sitting at a pristine 12-0, who had shown giant improvements with each new fight in Bellator. Borics was a seemingly terrible opponent for trying out a wrestling-heavy approach for the first time as a pro.

Early on, Pico was having success with his wrestling, but the Hungarian wasn't making matters easy. He defended Pico’s takedowns well and once taken down, consistently got to the cage and wall-walked back up. Had Pico chosen an easier opponent, that wouldn't have been an issue, and Pico could have acclimated himself to his new style. Instead, this put a lot of pressure on Pico to take him down again and again, using far more energy than he had in previous matches. It wasn't completely shocking, then, when Borics splattered Pico with a gorgeous flying knee, the same strike with which he had knocked out Teodor Nikolov at Bellator 196.

Pico and his team might have finally learned their lesson, as he has recovered with two nice victories over solid, but weaker foes in Daniel Carey and Chris Hatley, Jr. In both cases, he again used a mostly grappling approach, even avoiding the striking when he had a clear advantage and numerous openings in Round 1 against Carey. Still, despite the rebound, Pico has three unnecessary blemishes on his record and his sudden move to a wrestle-heavy style, largely disregarding his striking since the Corrales loss, might end up doing him more harm than good in the long run.

Ultimately, the lesson should be clear. No matter how talented the prospect, one should bring them up the boring and steady way, and not try for too much too soon.