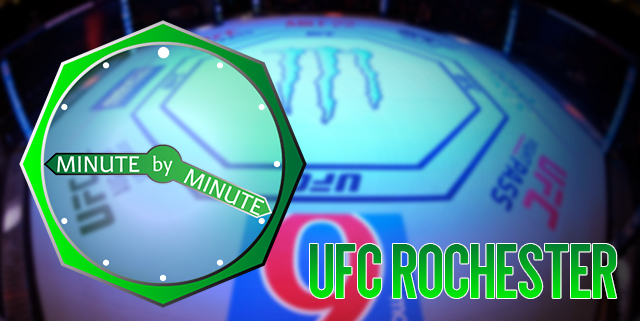 4:00 p.m.: So it looks as if the early prelims of UFC Fight Night 152 are going to overlap with the tail end of KSW 49, taking place right now in Poland. That’s not good news for the UFC’s ratings; every KSW event features a bunch of ripped, shaven-headed, scary-looking guys who might explode into breathtaking violence at any second, and that’s just the audience.

4:03 p.m.: Luckily, the Ultimate Fighting Championship came with a loaded card for its first-ever appearance in Rochester. Just kidding. They came with a card featuring five debuting fighters and zero Top-15 matchups.

4:06 p.m.: I like the live sponsor reads from the UFC booth. “UFC Rochester is brought to you by Toyo Tires. ‘Toyo Tires: We’re shooting a new ad without Dillashaw just as soon as we can.’”

4:08 p.m.: The prelims kick off with featherweights Julio Arce and Julian Erosa. Erosa is 0-2 in the UFC since earning a roster spot through Dana White's Tuesday Night Contender Series and probably fighting for his job here.

4:16 p.m.: Half a world away, KSW 49 ends with Roberto Soldic knocking Krystian Kaszubowski out so hard that they sent a produce truck instead of an ambulance for him.

4:35 p.m.: Next up is a middleweight scrap between Zak Cummings and Trevin Giles. The UFC booth mentions that by day, Giles is a police officer in Houston, Texas. That’s interesting; I live in Houston and I [redacted]

4:59 p.m.: Next up are Patrick Cummins and Ed Herman in a bout with low stakes for the 205-pound division but pretty high stakes for the fighters: “Short Fuse” enters on a long three-fight losing streak while Cummins comes in on two straight losses.

5:01 p.m.: Cummins’ nickname is just his middle name. He’s Patrick Durkin Cummins. Is there even one other well-known fighter who does that? Yet as rare as it is in MMA, as a former wrestler I can attest that it is the most typical wrestle-jock nicknaming convention ever. The guys somehow find out that you have a weird or unique middle name, and suddenly you’re Benjamin “Glasscock” Duffy for the rest of your life.

5:07 p.m.: Oh, man. Mere seconds after getting his mouthpiece knocked out by Cummins, Herman stuns Cummins with a knee, gives chase and polishes him off with punches. I have the feeling some animated GIFs of a googly-eyed Cummins stumbling away from that knee shot like Soda Popinski will be showing up on Twitter in the next few minutes.

5:11 p.m.: In his post-fight interview, Herman yells, “Can I get in the next UFC video game? I’ve been in the UFC for 13 years and I just want my kid to be able to play me in the game!” Paul Felder listens to the production truck through his earpiece, then replies, “Actually, how do you feel about Toyo Tires?”

5:35 p.m.: Grant Dawson chokes out the previously undefeated Michael Trizano in a featherweight showdown, then when Felder asks him for a callout, Dawson shrugs him off and says he wants to heal up and fight in August. It’s noteworthy how many UFC fighters call out places or times rather than people these days. It’s as if they realize that outside of the top five in any division, the names mostly run together, and that the UFC’s other problem is meeting its booking obligations to its fighters while still making geographically savvy matchups.

5:41 p.m.: Next up is the hotly-anticipated UFC debut of Michel Pereira, taking on Danny Roberts. Like a welterweight version of fellow exuberant Brazilian and recent UFC debutant Johnny Walker, Pereira’s highlight reel from the regionals is a whirlwind of insane techniques that can’t possibly work at the highest level… can they?

well, I guess I have no choice but to support this gentleman for the remainder of his fight career. My only request is that he one day fights Yoel Romero. pic.twitter.com/Kh5OUf1VCA

5:44 p.m.: Pereira walks out to the Octagon, weeping. That’s fine. Unlike baseball, there is crying in MMA. Whether it’s Mike Thomas Brown processing a flood of emotions as he ponders the chain of events that brought him honorably to the cage that night or Rousimar Palhares grieving for his opponent’s knee ligaments and calculating his NSAC fine in advance, many notable fighters are known for shedding a few tears during the long, lonely walk to the cage.

5:46 p.m.: When his name is announced, Pereira launches into what looks like a capoeira technique but then devolves into actual breakdancing. I’m gassed out already.

5:48 p.m.: Every martial art has its go-to techniques for finding and establishing distance. Western boxing has the jab. Muay Thai has the teep. Even Brazilian jiu-jitsu has the Rickson stomp and the Royce snap kick. Whatever art Pereira came up in apparently uses Showtime kicks, front somersaults and flying knees as its feeling-out moves. Yeesh.

5:49 p.m.: WHOA!!! Pereira knocks Roberts into next week with a huge flying knee, followed by a beautiful straight right.

5:52 p.m.: No truth to the rumor that Pereira’s home gym is a trampoline park.

5:58 p.m.: So that’s another minute and 47 seconds to add to the highlight reel for “Demolidor.” Whether his absurdly gonzo striking holds up in the UFC, let alone his… shall we say, very pre-USADA-looking physique, remains to be seen. Being old enough in this game to remember when Houston Alexander was for real, I like to give it at least three fights before passing judgment. But I know this much: Pereira’s next fight is appointment viewing.

6:00 p.m.: It’s always a refreshing change-up when Joe Martinez is on the mic. Really, anything that reminds us of World Extreme Cagefighting is a good thing.

6:05 p.m.: It’s interesting that the top three ring announcers in MMA sound exactly like you would guess from their attire. Jimmy Lennon Jr. sounds like a tuxedo: a dignified, classy old-school vibe that instantly makes anything feel like a special occasion. Martinez sounds like a dark blue bespoke suit with matching tie and pocket square: serious yet approachable, order in the midst of chaos, the consummate gentleman. Bruce Buffer is the sonic equivalent of a silver and blue brocade blazer that looks like a bullfighter hosting a 4LOKO tasting at the Liberace Museum. Not saying it’s good or bad; just making observations here.

6:37 p.m.: Aspen Ladd takes on Sijara Eubanks in a bantamweight scrap. Ladd is looking to preserve her undefeated record. She also seems bent on defending her title of “creepiest pre-fight stare in WMMA.” I guess if Maycee Barber wants it, she can come get it.

6:58 p.m.: Ladd comes back from a tough first round to take a unanimous decision over Eubanks. Considering how badly she was getting tagged in most of the exchanges, I feel comfortable now saying that the briefly rumored Holly Holm matchup would have been a bridge waaaaaaaay too far for Ladd at this point.

7:14 p.m.: In the main card opener, we see a matchup between the two most cursed types of mixed martial artist, as Davi Ramos walks out to Eminem, while Austin Hubbard is introduced as a “freestyle fighter.” How do the MMA gods even decide who gets to lose here?

7:15 p.m.: As if on cue, Ramos and Hubbard simultaneously kick each other in the nuts. The gods are appeased.

7:46 p.m.: I can’t think of a trilogy fight between high-level fighters that’s less necessary or intriguing than Charles Oliveira - Nik Lentz 3. So here we go, of course.

7:54 p.m.: GHOST TAP BY LENTZ. Oh, please let “do Bronx” win this thing, just so we don’t have to endlessly discuss “Did he tap or didn’t he?” in the context of a meaningless fight.

7:58 p.m.: Well, I guess my wish came true. Charles Oliveira declines to extend his submission record, instead choosing to hammer-fist “The Carny” into Bolivian. Now that we’ve settled the question nobody was asking, can we move on?

8:01 p.m.: Rashad Evans will be inducted into the UFC Hall of Fame this July. Great. Whatever. As long as the likes of Jens Pulver and Dan Henderson are on the outside looking in, that “Hall” is worth about as much as a pair of passes to a One Championship official weigh-in, but at least Rashad seems like a good dude.

8:05 p.m.: Evans’ highlight reel features a clip of him knocking third grade out of Brad Imes’ hillbilly skull. It turned out to be the best thing that ever happened to the guy, though, as Evans was just making room up there for gogoplata setups.

8:38 p.m.: Of course, Anderson has maintained ties with the world’s premier all-female MMA promotion, serving as a color commentator and in-cage interviewer. No truth to the rumor that she simply steps over the side of the cage like Tyson Fury entering a boxing ring. 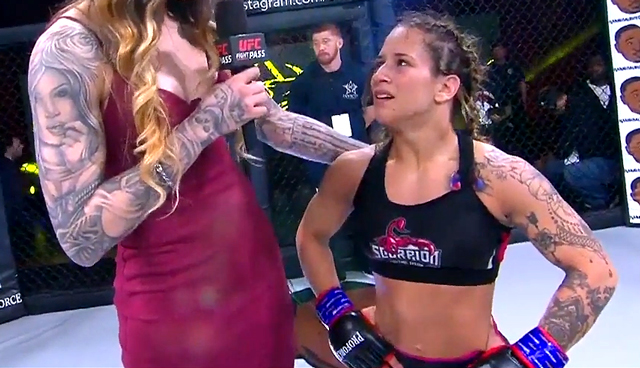 
8:43 p.m.: Spencer gets to Anderson’s legs, hauls her down, takes her back and chokes her out, making it all look pretty easy in the process. Congratulations to Felicia Spencer, still the Invicta… sorry, on her successful UFC debut.

8:47 p.m.: The UFC’s habit of killing the golden goose whenever it needs a body or wants a face obviously hurts Invicta, but it isn’t great for the fighters either. Anderson is now 1-2 in the UFC and the one win was a freak injury. Like Alexa Grasso before her, she’s a promising fighter and budding star who might have benefited from some additional reps in the friendly confines of the Scottish Rite Temple in Kansas City.

8:57 p.m.: The co-main event of the evening features Antonio Carlos Jr. taking on Ian Heinisch. Never ones to downplay a human interest story, the UFC booth makes it sound as if Heinisch had the death sentence in 12 systems before deciding to devote his life to cage fighting. 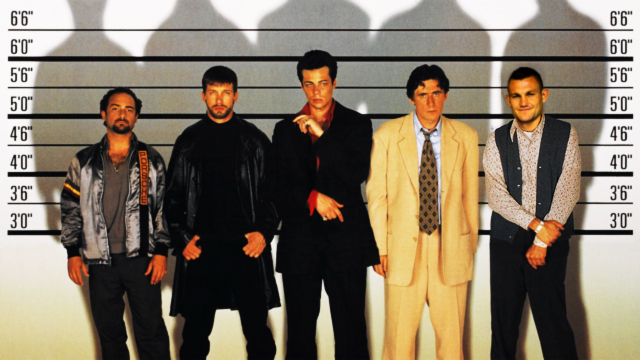 "The greatest trick the Hurricane ever pulled..."


8:59 p.m.: Carlos Jr’s nickname is “Cara de Sapato,” or “Shoe Face.” I know it’s a longstanding Brazilian tradition to nickname guys for their physical peculiarities -- look no further than “Toquinho,” “Buchecha” or the ever-popular “Negao” -- but I’ve had a good look at Antonio Carlos Jr. and all I can say is that whoever named him that better have some damned sexy shoes.

9:26 p.m.: Finally, our main event approaches: Rafael dos Anjos vs. Kevin Lee. A Top-5 welterweight in serious need of a win, taking on a Top-10 lightweight who may not stay at 170 after tonight. Last-minute substitutions aside, I can’t think of a UFC main event that had fewer divisional implications.

9:30 p.m.: UFC booth says Lee looks “healthy.” Any version of Lee not sporting a boil the size of a pear on his chest is, relatively speaking, healthy.

9:46 p.m.: Hmm… as it turns out, grinding out Rafael dos Anjos might not be quite as easy for most fighters as Colby Covington and Kamaru Usman made it look.

9:50 p.m.: Well, if the UFC was going to give us a main event that doesn’t do much to sort out the ladder of contention at 155 or 170, at least they booked it with fireworks in mind. Y’know, give the people what they… oh no, wait. It’s two grinders who use cage wrestling as their bread and butter.

9:52 p.m.: It doesn’t appear that the move to welterweight has solved Lee’s gas tank problems. That’s going to be a problem against RDA.

9:58 p.m.: Dos Anjos pancakes a Lee takedown attempt, lands in mount, moves to side control and frames up an arm triangle choke. The squeeze is brutal, and Lee taps. Great fourth-round finish for Rafael dos Anjos.

10:05 p.m.: What did we learn tonight? Dos Anjos is still really damn good in spite of losing to two bigger versions of himself in his previous two outings. Good night, freaks.