5:15 p.m.: Tonight I’m doing something I have not done in over three years: watch an Ultimate Fighting Championship event in a bar. Once upon a time, this was my default way of enjoying the sport.

5:18 p.m.: I look forward to this as a way to, anecdotally at least, take the temperature of the UFC and mixed martial arts fandom in general. The last time I watched a pay-per-view in a bar, Ronda Rousey and Conor McGregor were active fighters, Joe Silva was still congratulating fighters in the cage after a win, everyone was mad about the new Reebok deal and nobody thought the Fertittas would ever sell the UFC.

5:20 p.m.: Early signs are not good. There are nine TVs in this bar. Eight are showing the Astros-Angels game and one is showing some kind of obstacle course game show, watched by nobody. “Million Dollar Mile” or something? I had to cajole the bartender to switch that one to the UFC 239 prelims, which she did, but as I said, not heartening. There are probably 50 people in this bar right now and I’m apparently the only one who wanted to watch Pannie Kianzad take on Julia Avila.

6:45 p.m.: There’s a guy down the bar from me with the thickest, most hilljacked accent ever, reading the entire menu out loud in a sloooow monotone. He sounds like Bubba, reciting the 1001 culinary uses of shrimp in Forrest Gump. “Nachos dee-luxe… nachos soo-preme… tater tot nachos…”

7:00 p.m.: Chinese featherweight Yadong Song is on a six-fight win streak, the last three of which have been in the UFC, two of those three by impressive stoppage. Despite persistent rumors that Song has been cutting age as well as weight, he’s the most intriguing prospect in the UFC men’s 145-pound division right now. He’s also been the target of a lot of really juvenile wordplay centered around his name, which is just a shame. We should be better than that.

7:17 p.m.: Wow! Yadong knocks Alejandro Perez stiff in the first round. With each successive outing, he’s showing and growing more. I think it’s time to find out whether Yadong can hang with a Top-10 opponent.

7:28 p.m.: Randa Markos has the best hair color game in MMA, and it isn't even close. She is solid. Tonight, her hair is flaming fuchsia all the way to the roots, to the point you’d never know what her natural color was if you hadn’t seen her a few years ago. Speaking as a dark-haired person who has done similar things in the past, I can tell you that probably took three bleachings and hurt like hell. I respect her dedication to her craft. 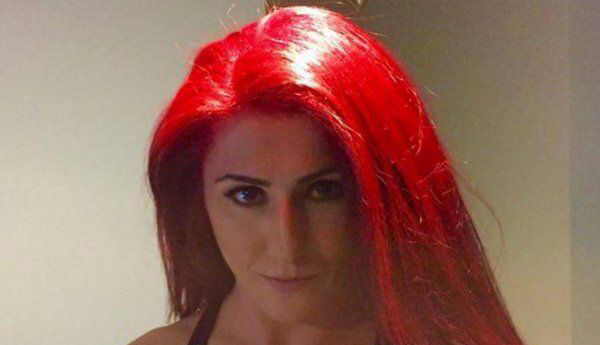 Pictured: Someone who has worked and suffered to achieve an admirable goal

8:48 p.m.: Gilbert Melendez vs. Arnold Allen was a low-key hellish fight to watch. Once the No. 2 lightweight in the sport behind B.J. Penn, Melendez is now chasing “The Prodigy” in another, less enviable category, as he’s about to stretch his four-fight losing streak into five. Too tough to get finished, too shot to offer even a glimmer of hope, this was just a grim death march in which Melendez may have lost every minute of every round. I am not sure what Melendez’s contract status is, but I know he came in pretty highly paid, and the organization has not been getting much out of him competitively or in terms of buzz. He might not be long for the UFC. 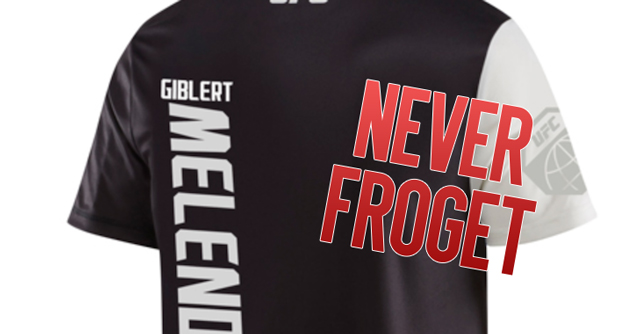 Speaking of that new Reebok deal...


8:55 p.m.: A few minutes before the pay-per-view is scheduled to start, and the bar is preparing to switch all but two TVs to the UFC. The room is full at this point, and it’s been filling with people here for the violence: my lone prelims TV is getting more and more of the attention.

9:08 p.m.: UPDATE: LFA shirt guy is not, in fact, a fighter. That’s a good sign for the promotion, in terms of their cultural currency. In other news, this bar apparently has a very competitive darts league on weeknights.

9:21 p.m.: This room is POPPING as Diego Sanchez is announced. That much has not changed since four years ago… or 14 years ago, for that matter. There are going to be some pretty depressed people in this room in 15 minutes though, because I’m cautiously ready to pronounce Michael Chiesa the truth at welterweight, at least in the sense of duplicating his lightweight status as a perennial top-10 fighter who’s tantalizingly close to a title shot.

9:28 p.m.: Chiesa’s grip strength is ridiculous. After the Carlos Condit fight last year, this is now twice in a row that I’ve seen him do things to people with a single hand on the wrist that most people would need a two-on-one to accomplish. In related news, it’s now twice in a row that he’s completely big-brothered a fighter who is no slouch on the ground.

9:45 p.m.: Time to find out whether the problems that stalled Luke Rockhold at middleweight will be solved by a move to 205. Considering that those problems included a fading chin -- which can be made worse by dehydration -- but also a susceptibility to counter punches despite having reach on all of his opponents, I’m not confident.

9:58 p.m.: Well, that’s that. I’m not pronouncing Rockhold’s career dead -- there are Top-10 light heavyweights he can beat, just as there were Top-10 middleweights, but I wouldn’t feel comfortable picking him against anyone with solid boxing. More alarmingly, that’s three times in four outings now that Rockhold has been knocked out really badly, like “Do you know where you are?” badly, to quote one of the three opponents in question. That’s an accumulation of brain injury that has to give you pause.

10:06 p.m.: There's a dude running around the bar, really upset about Rockhold losing. Legit yelling. I think he's trying to coach Rockhold through the TV screens, but he’s getting in multiple people's faces. Hasn’t put a hand on anyone yet. -180 odds on him getting in a fight before I leave this place. +2000 it's with me.

10:08 p.m.: Ben Askren vs. Jorge Masvidal. All week, fans have been calling it the real main event, with all due respect to the two title fights atop the card. The bad blood seems legitimate, at least on Masvidal’s part. I have “Gamebred” in this one, underdog and all, and in fact the Sherdog Pick ‘Em league went Masvidal at a 55-percent clip. I just don’t see Askren’s route to victory being easy. Masvidal has lapses in fight IQ, no question, but they usually involve him being too idle on the feet, either basking in his own defensive prowess or waiting too long for a perfect shot that never comes. Meanwhile, his ground game is one of the most underrated single skill sets in MMA.

10:17 p.m.: NOT THAT ANY OF THAT MATTERS. Holy F------ S---. Masvidal timed Askren’s shot perfectly and obliterated him with the best flying knee I have ever seen. Ever. That bumps Norifumi "Kid" Yamamoto-Kazuyuki Miyata, Jose Aldo-Cub Swanson and James Irvin-Terry Martin down the list. Askren is astral traveling the instant the knee lands, but Masvidal crushes him with two more big punches before Kevin Herzog can get to the murder scene. This bar has exploded around me.

10:18 p.m.: Masvidal is not done. He does David "Tank" Abbott one better, not only feigning unconsciousness but actually flopping to the canvas in mockery of the fallen “Funky” one. It may be the most delightfully tasteless, unsporting and inappropriate in-cage celebration in UFC history, and for good or ill, it will go down as a legendary, defining moment for Masvidal.

10:19 p.m.: The commentary booth is already calling this officially the fastest knockout in UFC history at 0:05. Askren has been helped to his feet, but he doesn’t look so hot. In fact, he looks like a guy who spent a month teasing someone who didn’t share his sense of humor, then got his ass kicked.

10:20 p.m.: The guy who was running around yelling after the Rockhold knockout is back at it. Apparently, he knows exactly what Askren should have done differently. Odds on a fight breaking out are now -260; on a fight with your friendly correspondent, +1600.

10:32 p.m.: As Amanda Nunes walks out, this redneck-ass bar is going completely ham for her. I find it heartening in a way I frankly needed this week. To say nothing of the current political climate, it just makes me happy to see a very drunk, rowdy, previously “USA”-shouting crowd on its feet for the supposedly unmarketable Brazilian lesbian champion. It’s almost as if the majority of fans just want to see great fights.

10:42 p.m.: Lights out, Holly Holm. Wow. Nunes adds another champion scalp to her mantelpiece, and further increases the distance between herself and the second-greatest woman in MMA history, whoever you want to argue that that is.

11:05 p.m.: Main event time, and this place is humming. The bar is packed, it is loud, Jon Jones is absolutely the man they’re here to see, and from the room’s response to the walkouts and introductions, the large majority are here to see him win. Color me slightly surprised.

11:08 p.m.: I say so only because Jones’ fights often aren’t that exciting. When a fighter has never really been beaten, the only things that can offer intrigue are if he finishes his challengers spectacularly, or seems vulnerable enough that the audience believes his opponent might catch him, hurt him or even pull off the upset. Most Jones fights involve him taking a round and a half to get his bearings, then rolling downhill with increasing speed until either his opponent breaks or the final horn sounds. With a few exceptions, even his finishes are clinical and brutal rather than pyrotechnic.

11:17 p.m.: OK, color me surprised again. After a round, I now believe Thiago Santos could catch and hurt Jones in a way I have not believed of a Jones opponent since the first Alexander Gustafsson meeting. If nothing else, we have a fight.

11:25 p.m.: “His knee… his knee…” Joe Rogan is already recording a 25-minute infomercial for a Jones-Santos rematch, just in case. Interestingly, both fighters seem to be hobbling. But if this ends in a TKO win for Santos because of Jones’ leg, or Santos’ knee forces a stoppage in a fight he was winning, there will be plenty of clips for the hype reel.

11:55 p.m.: Jones retains via split decision. I wasn’t scoring round by round -- it’s impossible for me to do that in a crowded place; I’m too easily swayed -- so I don’t know if it was the right decision, but I do know that that was the most exciting Jones fight since UFC 165, if not of his entire title reign so far. I still need to mull over the fact that Jones never really tried to bring the fight to the ground, where his advantage would seemingly have been the greatest. Hm.

12:01 p.m.: As the bar puts on “Stacy’s Mom” by Fountains of Wayne to encourage me to leave, let’s reflect on what we learned. I learned that even on a card with arguably the greatest fighter we have ever seen from each gender, it’s possible to steal the show by trash talking the right (wrong?) guy and then wandering into his world. Good night, freaks.