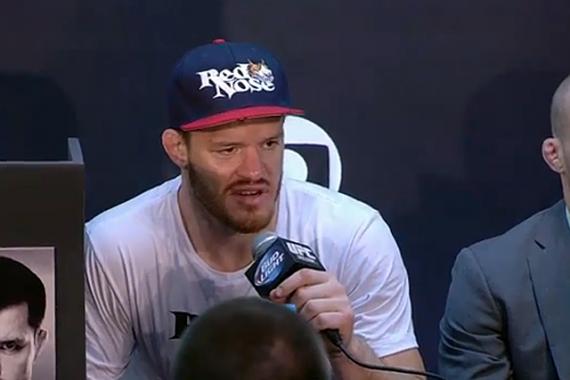 The Power MMA Team representative came up woefully short in his first experience with elite competition, as he bowed to an opening-round body kick and follow-up punches from Lyoto Machida in the UFC Fight Night “Machida vs. Dollaway” main event on Saturday at the Jose Correa Arena in Sao Paulo, Brazil. His body racked by rib-roasting pain, Dollaway succumbed to the blows 62 seconds into round one.

Machida had never before finished a fight so quickly. “The Dragon” remains one of the Ultimate Fighting Championship’s very best middleweights, perhaps a win or two away from a rematch with reigning 185-pound champion Chris Weidman -- a man to whom he lost a five-round decision at UFC 175 in July. Machida’s 14 career victories inside the Octagon tie him for 10th on the promotion’s all-time list.

In wake of UFC Fight Night “Machida vs. Dollaway,” here are six matches that ought to be considered:

Lyoto Machida vs. Luke Rockhold: There is no shortage of intriguing theoretical matchups inside the revitalized middleweight division. Machida is now 3-1 since downshifting to 185 pounds, and, according to preliminary FightMetric data, he did not absorb a single strike, significant or otherwise, in his brief encounter with Dollaway. No damage means “The Dragon” figures to be ready to fight again sooner rather than later. Rockhold, 30, has championship aspirations of his own. The American Kickboxing Academy ace last competed in November, when he submitted Michael Bisping with a guillotine choke in Australia.

Renan Barao vs. Raphael Assuncao: Barao did little to inspire confidence from the masses in snatching a third-round submission against Mitch Gagnon in the co-main event. Nevertheless, he got the job done, and the fact that he competes in one of the weakest weight classes in the UFC will likely work in his favor moving forward. The 27-year-old Nova Uniao export sports a gaudy 23-1 record over his past 24 outings and has designs on returning to the bantamweight penthouse. Assuncao, some say, also has a rightful claim as the No. 1 contender, as he was the last man to defeat current champion T.J. Dillashaw. The 32-year-old Atlanta-based Brazilian has rattled off seven straight wins, including a unanimous decision over Bryan Caraway in October.

Patrick Cummins-Jan Blachowicz: With each appearance, Cummins continues to distance himself from the shellacking he endured against Daniel Cormier as a short-notice replacement for Rashad Evans in February. The two-time NCAA All-American wrestler stifled “The Ultimate Fighter: Brazil” Season 3 winner Antonio Carlos Jr. with takedowns and ground-and-pound in his latest conquest, as he cruised to a three-round unanimous decision. Cummins has gone on a three-fight tear since his ill-fated encounter with Cormier and appears to be in position to make some noise at 205 pounds. Blachowicz made a successful Octagon debut at UFC Fight Night “Nelson vs. Story” in October, when he dismissed Swedish brute Ilir Latifi with a first-round body kick and follow-up punches.

Rashid Magomedov-Tony Ferguson: The well-rounded Magomedov penciled his name in the record books by authoring the latest finish in the history of the UFC lightweight division. The fast-rising former M-1 Global champion took care of the previously unbeaten Elias Silverio with punches 4:57 into the third round of their competitive scrap at 155 pounds. Magomedov has put together an 11-fight winning streak since his April 2010 rematch with Magomedrasul Khasbulaev resulted in a split decision defeat. Ferguson, meanwhile, has compiled a 7-1 record since entering the UFC three years ago. “The Ultimate Fighter” Season 14 winner last fought at UFC 181 on Dec. 6, when he submitted Abel Trujillo with a rear-naked choke.

Erick Silva vs. Brandon Thatch-Stephen Thompson winner: Silva has become a maddening piece of the UFC’s welterweight puzzle. A breathtaking talent with potent all-around skills, the 30-year-old former Jungle Fight champion has been undercut by inconsistency since arriving in the promotion in 2011. Silva was in rare form against Roufusport’s Mike Rhodes, as he choked the onetime Resurrection Fighting Alliance titleholder unconscious with an arm-triangle 75 seconds into their 170-pound showcase. Thatch and Thompson will collide at UFC Fight Night “Brown vs. Saffiedine” on Feb. 14 in Broomfield, Colo.

Hacran Dias vs. Max Holloway-Cole Miller winner: Nova Uniao’s Dias stayed relevant at 145 pounds, as he snapped a two-fight losing streak with a unanimous decision over Darren Elkins on the undercard. Scores were 29-28, 29-28 and 30-27. Dias surprised the hard-nosed wrestler with repeated takedowns in their 15-minute encounter, all while scoring with power punches during their standup exchanges. The Brazilian withstood a late surge from a desperate Elkins in the closing moments of round three, as he rebounded from back-to-back losses to Nik Lentz and Ricardo Lamas. Holloway and Miller will do battle under the UFC Fight Night banner on Valentine’s Day.