Brock Lesnar's post-fight theatrics would've excited and enraged the masses on any event on any night, but I can't help wondering if they weren't amplified by the fact that they stood side by side with the self-effacing decorum of Georges St. Pierre, MMA's quintessential babyface.

On the surface, St. Pierre seems to represent all that Lesnar is an affront to. The tailored suit over the DeathClutch hoodie. Every St. Pierre opponent is his toughest-to-date; every Lesnar opponent is another man to be embarrassed and emasculated. Happy, smiley baby-kissing as opposed to angry, scowling baby-eating.

Look no further than the UFC 100 pre-fight news conference, which produced one of the most bizarre moments of the year when Lesnar, after giving his opening remarks, tried to walk out of the presser. UFC President Dana White had to stop him in stride, shake his hand and have an impromptu powwow to get him to sit down and suffer through the rest of the 60-minute media purgatory.

St. Pierre, on the other hand, acted happy to be there, did all his required media duties and then did even more after the presser. The mainstream media eat this guy up. He is a true "professional" -- or at least the way that people in MMA like to imagine a professional should be.

The strange truth of the matter is that St. Pierre and Lesnar both have certain qualities of true "professional" athletes, and frankly, they're perhaps their worst traits.

St. Pierre is thought to be an ideal professional because he offers affable nice guyness to a sport that some media members still need convincing isn't filled with Max Cady types. In a quirky bit of logic, St. Pierre's shortcomings as a media entity -- the clean, conservative, canned answers dripping with suffocating, cliched "respect" for every opponent -- are seen as affirmation that he is in the mold of micro-managed superstars like Kobe Bryant and Alex Rodriguez, as though that is company to covet in terms of media relations.

The decidedly unprofessional part -- and the best part -- of St. Pierre is the level of accessibility. At this point, no one would begrudge him if he eschewed round two of a media storm after a pre-event news conference. Yet, he soldiers on. His canned answers are highly familiar, but if you talk to many mainstream media folks about covering a UFC, they'll almost assuredly comment on how bizarre it is that fighters with the stature of St. Pierre are so liberal and generous with their time in a way that would be completely alien to stick-and-ball sports stars. 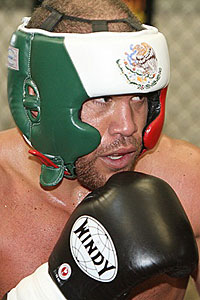 Dave Mandel/Sherdog.com
Tito has nothing on Lesnar.
At this point, any rink-a-dink podcast can phone up St. Pierre's manager Shari Spencer and likely get 10 or 15 minutes with MMA's welterweight king (fortunately, this is true for us at the Sherdog Radio Network as well). Better still, he is as authentically gracious as he was six years ago, even if more guarded in his comments. It's little wonder the sorts of guys who have spent time covering the NFL or NBA are completely amazed when they see this dynamic in action.

This is one of the greatest features of MMA. But it's hardly the prescriptive professionalism we're used to in pro sports -- the same brand of carefully handled business that typifies Brock Lesnar.

Apart from a pride parade, Lesnar would likely rather be anywhere else in the universe than doing media appearances. He is handled by his lawyers, who pick and choose when, where and with whom Lesnar talks, even overriding UFC's PR department in some instances. At events he's shuffled to and from engagements by a brigade of personal staffers. Though he may come across as rough and abrasive, Lesnar is little different than Tiger Woods: stay away from the media until it is time to compete or promote something, choose a group of people with which to showcase your well-crafted character and then retreat back to your palatial estate (or home in the Minnesota wilderness).

Because of his post-fight antics, Lesnar's character lines up with his larger-than-life physique. As a total package, it seems unconventional and startling for MMA. Yet he couldn't be more authentically conventional. Lesnar seeks to come across in pre- and post-fight interviews as a loose cannon, but he's not.

Lesnar is a corn-fed rassler who would be farming if not for fighting. He sought to marry a playmate and did. Saturday night, he came out to "Enter Sandman" by Metallica -- assuredly the first song on the soundtrack of trite tough guy-ism. He was effusively proud to drink Coors Light. When you take the pro-wrestling overtures out of the equation, he might as well be Meathead X.

And is that what we would actually want? Would Lesnar be nearly as compelling if that was the whole of him? Of course not.

Lesnar's pro wrestling background allows him to be 50 times the firebrand Tito Ortiz could have ever dreamt of. By the standards of the sport, his pitch job is "unprofessional," but he understands acutely that when there's a fight on his calendar, he's not working strictly in the MMA business -- he's in sales as well.

That's not to say that all his sound bites are fake and scripted, either; Lesnar is someone who has historically had a chip on his shoulder and isn't about to invite someone like Frank Mir on a hunting trip. However, he does know how to turn it up to 11 when the mic is on.

While stick-and-ball orgs have long sought to minimize the politics of confrontation, it has always been the go-to weapon for prizefighting. Greatness and relevance can only ever account for so much. Ali-Frazier isn't the most brutal and authentic rivalry in sports just because they were great heavyweights; it's also because of what both were unafraid of saying about each other. Accordingly, it is little wonder Lesnar's first three UFC appearances have added up to nearly 2.5 million pay-per-view buys, a number that's only going to grow more bloated as he defends his heavyweight title.

It's easy to cast St. Pierre as a polished pro and Lesnar as a gimmicky antagonist who doesn't understand the martial ways of honor and respect, but it's wrong. Both of them have trappings of the sterile professionalism that alienates and disengages fans and the media. St. Pierre and Lesnar both have their virtues: St. Pierre as an authentically swell guy who is willing to make time for anyone and Lesnar as a guy who will simultaneously polarize and magnetize the public to a product that otherwise may have reached its commercial point of plateau. Both men are at their most interesting when they disobey the castrated mandate of "professionalism."

Do we really want a sport full of the soulless fraudsters that populate popular sports? How refreshingly honest would it be for St. Pierre to admit the winner of Swick-Kampmann isn't as good as Jon Fitch or Thiago Alves in an interview on an MMA blog you've never heard of?

How great would it be for Lesnar to chime in on the direction of the Republican Party on some podcast when he doesn't have a fight or a hunting DVD to promote?

That's the MMA I crave, professionalism be damned.