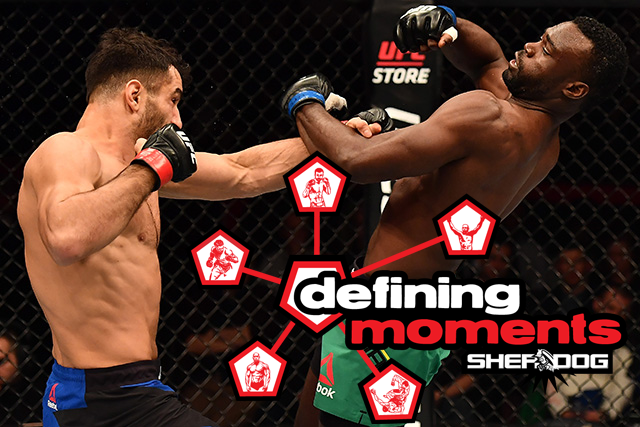 Gegard Mousasi (44-6-2) is the reigning Bellator MMA middleweight champion. On Saturday at Bellator 206, the Dutch national will put his belt on the line against Rory MacDonald in San Jose, California.

As fight day approaches, here are five moments that have come to define the career of the man known as “The Dreamcatcher.”


Mousasi had beaten Denis Kang and Dong Sik Yoon to qualify for the finals of the 2008 Dream Grand Prix in Saitama, Japan. Having vanquished Dutch striker Melvin Manhoef, the 23-year-old met Brazilian grappling phenom Ronaldo Souza in the final. Early in the first frame, it appeared that “The Dreamcatcher” was in big trouble, as he found himself on his back with the multiple time Brazilian jiu-jitsu world champion standing over him. When “Jacare” uncorked a massive right hand, Mousasi responded with an up-kick that knocked the Brazilian out cold, 2:15 into the opening frame.


Mousasi’s first matchup in Strikeforce saw him challenge for the light heavyweight strap opposite Renato Sobral in August of 2009. The fight was in its infancy when Mousasi, having thrown “Babalu” to the canvas, stood over the prone Brazilian and unleashed a barrage of venomous and accurate punches. The Dreamcatcher then dropped to his knees and continued the assault until the referee stepped in, a mere 1-minute after the bell had sounded. The recently turned 24-year-old was a champion yet again.

A Bump In the Road


In the first defense of his light heavyweight title, Mousasi met heavy-handed wrestler Muhammed Lawal in April 2010. Lawal leaned on his wrestling skills from the outset. Over the duration of the 25-minute duel, Lawal finished 11 of 14 takedowns. On the feet it was a different story, with Mousasi connecting with 46 more punches than his American adversary. A point deduction for an illegal up-kick did not help Mousasi’s cause. At the end of the five-round match, the judges all sided with Lawal. The defeat marked the end of a near three and a half year, 15-fight win streak for Mousasi.


In November 2016 at UFC Fight Night 99, in what was the 11th and second-to-last bout of Mousasi’s Ultimate Fighting Championship stint, he faced Uriah Hall in a rematch of their UFC Fight Night 75 clash, a little over a year earlier. Hall had won the first encounter by TKO. It remains the only occasion Mousasi has been stopped by strikes. This time around, The Dreamcatcher was at his cerebral best, adeptly moving out of the way of Hall’s spinning kicks whilst landing accurate jabs and low kicks of his own. Late in the first frame, Mousasi, having hauled Hall to the mat, laid into him with heavy right hands. Hall, splayed out on his front, gave the referee no option but to wave off the contest 4:31 into the proceedings.


Having concluded his UFC tenure on a five-fight win streak, free agent Mousasi signed with Bellator in 2017. After a controversial decision victory in his first appearance with the promotion, Mousasi squared off opposite middleweight champion Rafael Carvalho at Bellator 200, on May 25 in London. The beginning of the end came when The Dreamcatcher grounded Carvalho against the cage. From there, he transitioned to the Brazilian’s back and rained down right hooks to the side of his head until the referee halted the beatdown. In only his second Bellator match, Mousasi had won the middleweight title.