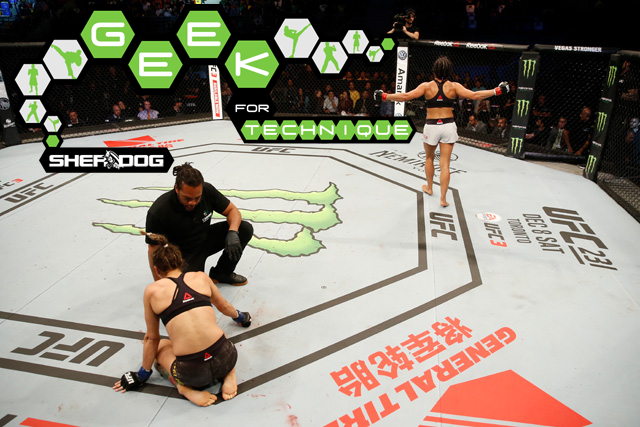 The Ultimate Fighting Championship’s first visit to Argentina was one for the books with great fights from top to bottom and the fans in Buenos Aires were some of the most passionate in recent memory. Today we go over the best techniques from UFC Fight Night 140.

The first fight of the night saw Nad Narimani grind out Anderson dos Santos for the unanimous decision. The two traded blows in the pocket early, but it was Narimani who found more success with his right hook. The bout was closely contested on the feet, but Narimani’s grappling ended up being the element that won him the fight.

Jesus Pinedo made his Octagon debut against Devin Powell and took home another close decision victory. Powell was the aggressor throughout the fight, but Pinedo’s counter left and rear body kick was landing clean all night and eventually slowed Powell down enough for Pinedo to take home the win. After the contest, Pinedo said his confidence started to soar and allowed him to pick up the pace in the later rounds to secure the win.

Argentina’s own Laureano Staropoli was brought to tears after his fight of the night performance over Hector Aldana and proved to fans around the world that he is a legit prospect. The fight was a slugfest from the very first exchange and after the first round, Aldana had a nasty cut over his left eye and Staropoli had a hematoma the size of a small child on the right side of his head. The two traded wildly in the pocket for most of the fight, but Staropoli’s strikes were landing just a bit faster and allowed him to take home a decision victory in his home country.

Austin Arnett defeated Humberto Bandenay via unanimous decision with an incredible comeback in the 2nd and 3rd rounds. The first period saw Bandenay getting the better of Arnett in opening exchanges and it seemed Arnett had no answers for his pressure. But in the later frames, Arnett overhauled his game plan and pushed the pace, making Bandenay the one who couldn’t deal with the pressure and exploited his inability to defend while moving backward.

In possibly one of the last flyweight fights in UFC history, Alexandre Pantoja made quick work of Ulka Sasaki when he submitted him with a rear-naked choke just two minutes into the fight. The No. 9 ranked flyweight hasn’t been talked about as a future contender, but he is now 4-1 in the UFC and 20-3 total and has a finishing rate far above the flyweight average. If the UFC’s flyweight purge didn’t happen we would be talking about Pantoja as a legitimate title contender, but with the division’s future up in the air, only time will tell what happens to Pantoja.

The Fox Sports 1 prelim headliner saw UFC veteran Michel Prazeres waste no time finishing Bartosz Fabinski with a guillotine in the first round. Prazeres hurt Fabinski early with a wild overhand right that should have ended the fight. Fabinski seemed to be knocked back into consciousness when he hit the ground and Prazeres pulled for a guillotine to finish him just one minute into the contest. Prazeres is now 10-2 in the UFC and certainly deserves a ranked opponent next.

The main card opened with Cynthia Calvillo taking on Poliana Botelho in a catchweight bout. Calvillo had a tough weight cut that ended up making the rounds on social media after she missed weight, causing many fans to doubt her. She silenced the critics with a first-round rear naked choke victory over one of the hottest prospects in the strawweight division. Calvillo is now 4-1 in the UFC and possesses the grappling ability to one day be a contender in the UFC’s most stacked woman’s class.

Marlon Vera continued the trend of submission victories when he secured a rear-naked choke on Guido Cannetti near the end of the 2nd round. Although the submissions were the highlight, it was set up with a beautiful rear uppercut and patient flurry against the cage that had Cannetti hurt and open for the submission. Vera has been with the UFC since he was just 21 years-old and is now 6-4, with five of those wins coming by submission or knockout.

UFC newcomer Ian Heinisch made the most of his UFC debut when he picked apart Cezar Ferreira from bell to bell. Heinisch was the aggressor from the get-go, but Ferreira did an excellent job of keeping his composure and moving along the cage to avoid the flurry of punches coming his way. But as the fight went on Heinisch pressure proved too much to handle and Ferreira started looking for sloppy takedowns that were easily avoided and Heinisch eventually went on to win a unanimous decision.

Next up was another bout that saw a UFC newcomer defeat a veteran when Johnny Walker knocked out Khalil Rountree with a nasty elbow in the opening stanza. The fight started off as a patient striking battle but the two clinched up against the cage and Walker landed two short elbows to Rountree’s skull that ended the clash. Walker is an interesting prospect to watch for in the UFC’s most depleted division and at only 26 years-old he’s already amassed a 15-3 record with 14 finishes.

The co-main event of the night saw former title challenger Ricardo Lamas take on fan favorite Darren Elkins. Lamas put on one of the most brutal performances of the night before getting a last-second TKO stoppage for his first win since the summer of 2017. After dominating the fight on the feet, Lamas took the fight to the ground and fired off elbows and punches from top position and the fight was rightfully stopped with less than a minute left. Lamas is now 10-5 in the UFC and hopes to one day be back in the featherweight title picture.

The main event of the night saw hometown hero Santiago Ponzinibbio put on the best performance of his career against Neil Magny. Although Ponzinibbio is known for his aggressive striking, his success against Magny came from the very basics of combat sports.

Ponzinibbio’s jab and leg kicks were landing with ease all night and allowed him to back Magny against the cage and look for short and tactical flurries in the pocket. Ponzi has one of the most accurate jabs in the business and routinely landed it directly on Magny’s right eye that messed with his vision from the get-go. Knowing this is a five-round fight and Magny excels in the later rounds, Ponzi spent the majority of the fight jabbing and feinting Magny to the cage while keeping a constant pace to save his cardio for the later frames. He also knew Magny has some of the best footwork in the division and invested in leg kicks early to take away his movement.

Midway through the 4th round, Magny’s movement was severely limited from the leg kicks and he once again found himself backed against the cage with no room to escape. With his opponent tired and hurt, Ponzinibbio feinted the jab into a straight right and face planted Magny for the KO win in his home country.