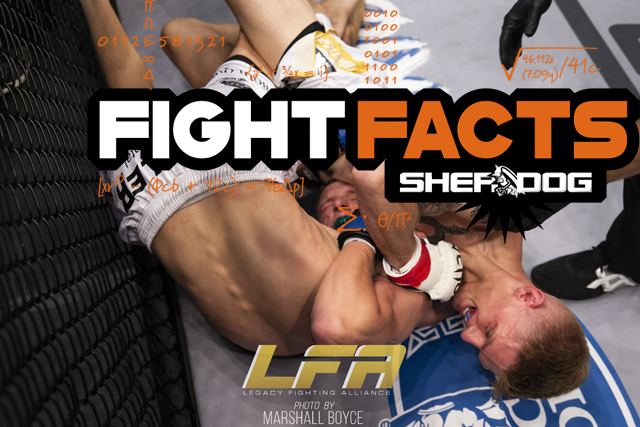 Heading to Kearney, Nebraska, for the first time in its history, the Legacy Fighting Alliance on Friday staged LFA 48 “Stots vs. Lilley” -- an event that featured a record-setting guillotine and a clash between two veterans of the sport with almost 60 combined fights between them.

THREE OUT OF FOUR AIN’T BAD: Four fighters -- Calen Born, Ryan MacDonald, Duane Johnson and Brock Smith -- all competed with undefeated records, and three of them left with their records intact. Only Johnson ended his night no longer unbeaten.

GOING DOWN SLOW: LFA 48 was the second Legacy Fighting Alliance offering in as many events to have no recorded bouts end in the first round. That stands in sharp contrast with LFA 45, which featured a record eight fights ending inside one round.

AMONG ROYVALTY: Picking up his fourth win under the LFA banner, Brandon Royval tied four other fighters for the second-most victories in company history: Maikel Perez, Matthew Frincu, Maycee Barber and Nate Jennerman. They all trail Damon Jackson with six.

GET BORN AGAIN: Born spent more time in the cage with Kassius Holdorf by going the 15-minute distance than in the rest of his career combined. His first five bouts totaled roughly 11:30 of fight time.

NOT FOR NOTHING: By submitting Trevor Ward with a second-round guillotine choke, MacDonald improved his undefeated record to 10-0.

GUILLOTINE (IT GOES YAH): As a bantamweight, MacDonald pulled off a guillotine against Ward. Bantamweights have now performed more guillotine chokes than any other weight class in the LFA.

DO WHAT YOU GOTTA DO: With referee Thomas Fitzpatrick controversially calling a stop to the battle between Croom and Minner, the former picked up the TKO win due to elbows. It was just the sixth elbow strike-induced stoppage ever in the LFA and the first to occur in Round 2.

DIGGING QUITE A HOLE: In dropping his fourth LFA bout, Minner now holds the most losses in promotional history. Since making his organizational debut at LFA 2 in 2017, Minner has gone 0-4 inside the Legacy Fighting Alliance and 4-0 outside of it.

ROCK BOTTOM: Johnson entered the LFA cage with a perfect record of 4-0, which was snapped when “The Rock” ended up on the wrong side of a split decision against Austin Jones.

NEVER SAY NEVER AGAIN: Coming into LFA 48, the promotion had never traveled to the Resurrection Fighting Alliance’s birthplace in Kearney, Nebraska, Ryan Lilley had never been knocked out (12 fights) and Born had never fought beyond the first round (five fights).