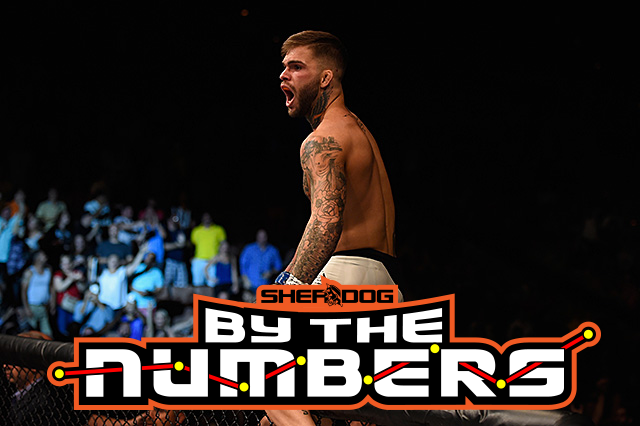 By beating Dominick Cruz for the Ultimate Fighting Championship bantamweight title, Cody Garbrandt did what nobody had done in nearly 10 years, namely time The Dominator’s movements. And he did so when not many people gave him a chance.

But against someone who knew him better, Garbrandt faltered. At UFC 207, T.J. Dillashaw deprived him of a successful first title defense by knocking him out in the second round. It was a barn-burner of a match that had both sides banking on precision striking to get the job done. In the first round, Garbrandt appeared to have his rival’s number, even dropping him as time expired. Then Round 2 saw Dillashaw connecting during an exchange, which eventually led to the finish.

Their upcoming rematch is expected to offer a surplus of excitement, as Garbrandt is hell-bent on taking his belt back. UFC 227 will take place on Aug. 4 at the Staples Center in Los Angeles, California. Before the two movement specialists settle the score, here are some of the numbers that have defined “No Love.”

15: Years of age when he started boxing, training under his uncle who was an Olympic alternate.

32: Wins without a loss as an amateur boxer. He was an American Boxing Association (ABA) junior champion in 2007 and 2008. The following year, he fought in his first MMA bout.

6: Victories and 2 losses as an amateur MMA fighter. Then in 2012, he turned pro and signed with Pinnacle FC, where he went 3-0.

9: Wins by KO or TKO. Garbrandt has certainly made good use of his excellent boxing background, finishing some of the best in the bantamweight division with his fists.

65: Inches of reach. This isn’t anywhere near the longest in the bantamweight division, with Johnny Eduardo and Yuri Alcantara listed at 71”.

2: Divisions fought in. He started his professional career as a bantamweight. Then on his second fight, he moved up to featherweight before returning to bantamweight for his next bout.

1: Main event to his name. Garbrandt headlined UFC Fight Night 88 with rising Brazilian star, Thomas Almeida. He starched Almeida and dealt him the first loss of his career. It also earned him a “Performance of the Night” bonus.

0: Submission stoppages. None of his 11 victories came by submission and only two have been by decision. Put simply, Garbrandt is a knockout machine.

68: Significant strikes fired against Dominick Cruz’s 88. While “The Dominator” led in this department, it was Garbrandt who connected the more telling blows, at times forcing his opponent to throw wild punches. “No Love” also dropped Cruz on several occasions and landed one takedown.