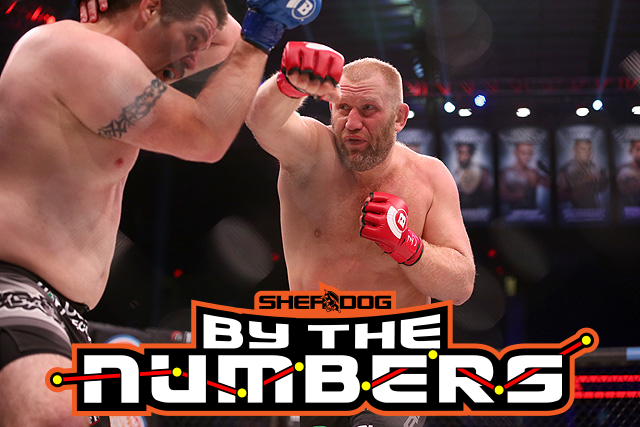 With an impressive record and an above average résumé, Sergei Kharitonov is easily one of the top fighters outside of the Ultimate Fighting Championship.

He will try to further his credentials when he returns to the Bellator MMA cage opposite Roy Nelson on Friday. The tough veterans will co-headline Bellator 207, which will take place at the Mohegan Sun Arena in Uncasville, Connecticut. Take a look at some of the figures that have made the Russian an exciting addition to the promotion’s heavyweight roster.

11: Professional kickboxing fights, and went 7-4 with five knockouts. Kharitonov faced top-quality opponents like Mighty Mo and Rico Verhoeven in the ring. He fought in different promotions, most notably K-1 and Glory.

18: Years as a professional mixed martial artist. Kharitonov has fought in a number of promotions in different parts of the world. Apart from Ukraine and Russia, he has also been to Japan, Kazakhstan, China and the United States.

3: Fights in one night to start his career. Kharitonov debuted at a heavyweight tournament called Brilliant 2: Yalta's Brilliant 2000, which took place in Yalta, Ukraine. He finished all three of his opponents to win the tournament.

8: Straights wins before suffering his first loss to Antonio Rodrigo Nogueira. That successful run included victories over Semmy Schilt and Murilo Rua in Pride Fighting Championships, as well as a heavyweight championship at a promotion called Tournament of Real Men.

11: Fights in Pride, where we had a pretty good run. Kharitonov lost only to Nogueira, Alistair Overeem and Alexander Emelianenko.

2: Fights in Strikeforce. He entered the promotion's heavyweight grand prix, beating Arlovski and losing to Barnett.

2: Fights in Dream and went 1-1. He submitted Jimmy Ambriz via punches at the final round of the 2008 middleweight grand prix before tapping to Jeff Monson’s north-south choke at Dream 8.

6: Fights for M-1 Global. Before returning to Bellator this October, he last fought at M-1 and the bout ended in a no contest. Other than that, he won all his other matches for the promotion.

6: Losses in his career. Kharitonov may be a relative unknown to some fans, but he has already faced high-level competition. His losses were dealt by Nogueira, Overeem, Emelianenko, Barnett, Monson and surprisingly, Javy Ayala.

3: Fights by decision. In all his 34 fights, Kharitonov went the distance only thrice, and these were against Nogueira, Werdum, and Joey Beltran.