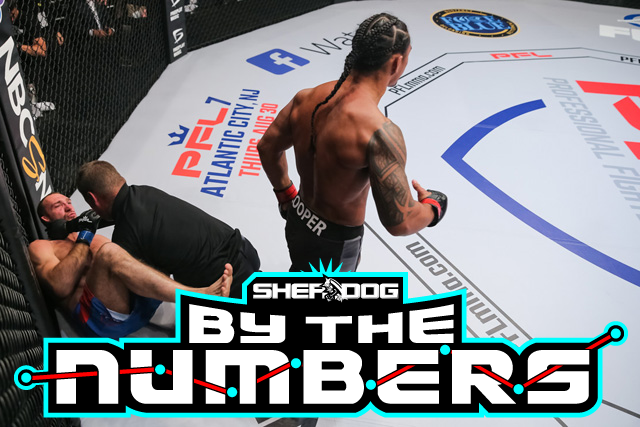 Ray Cooper III smashed submission specialist Pavel Kusch in 18 seconds to advance to the Professional Fighters League welterweight tournament playoffs. Next for him is a familiar opponent, one whom he had previously knocked out. Will Cooper duplicate his win over Jake Shields this weekend in the nation’s capital? As the Hawaiian heavy hitter rolls out his proven game plan, read about the numbers that gave rise to a new welterweight contender.

8: Seconds to make a huge impact in his professional debut. He knocked out fellow Hawaiian Kani Correa. It was indeed a sign of things to come for the rising PFL star.

2: Straight wins to start his career. Cooper entered his second match with a ton of confidence after a spectacular debut. Once again, he stopped his opponenent in round 1; this time, by submission. Showing he isn't all about power, he choked out Adam Smith near the end of the first round.

16: First-round stoppages. With a dreaded all-around game, Cooper has a knack for finishing fights early as evidenced by his quick finishes.

4: Seconds to starch Matthew Colquhoun. He scored the stunning KO at an event called X-1 45: Live, which took place in his native of Hawaii.

1: Round in which he went the distance. In all his 20 fights, Cooper reached the last round only once, and this was in his match with Handesson Ferreira. It was his last fight before joining PFL.

5: Losses in his career. He suffered setbacks at the hands of Joey Gomez, Danny Navarro, Craig Jackson, Jun Yong Park and Ferreira.

10: Knockouts. Cooper is a feared striker with huge power in his hands. He has notable knockout wins over Shields and Charles Bennett.

1: Left hand to the jaw to drop Shields at PFL 3. Cooper followed it up with a furious ground-and-pound until referee Mario Yamasaki called the fight at 2:09 of round 2.