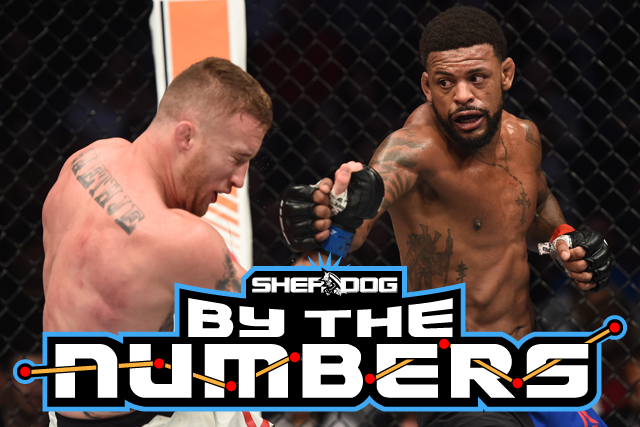 
Michael Johnson bounced back from a three-fight losing skid by decisioning Andre Fili at UFC Fight Night 135. “The Menace” knows he needs a strong showing to stay relevant at featherweight, so expect nothing less than fireworks when he faces Artem Lobov this weekend.

The two hungry fighters will co-headline UFC Fight Night 138, which takes place at the Moncton Events Centre in New Brunswick, Canada. Before they get all fired up, here are some numbers that have made Johnson such a danger to anyone in the division.

3: Months of MMA training, after which he joined an amateur competition. Johnson banked on his punching power and wrestling background to find ammy success.

2: Straight victories to start his professional career. He stopped both of his opponents in round 1.

12: Fights in regional promotions before the UFC took notice. Six of them were at FM: Productions in Springfield, Missouri.

2: Coaches had Johnson at the top of their list when time came they had to choose who their first pick is at “The Ultimate Fighter 12.” Both Georges St. Pierre and Josh Koscheck were impressed by Johnson’s résumé, having won two titles in the regional circuit. For his entry bout, Johnson decisioned Pablo Garza in dominant fashion.

3: Takedowns allowed to Jonathan Brookins in their finals match at TUF 12. According to Fightmetric, Brookins slightly outpointed Johnson on the feet, 32-30, making those takedowns a deciding factor of the fight’s outcome.

91: Significant strikes in a losing effort against Justin Gaethje, who landed 104. Johnson was able to rock his opponent twice but failed to capitalize. In the end, Gaethje won by TKO in an absolute barnburner that earned Fight of the Year honors from different media outlets.

8: Takedowns total in the UFC. Johnson was one of the top NJCAA wrestlers in the country during his time, and has scored takedowns of his own in the UFC, most notably on Nate Diaz, Joe Lauzon and Edson Barboza.

116: Significant strikes as opposed to Lauzon’s 25. It was a lopsided match that saw Johnson cruising to an easy unanimous decision win.

38: Significant strikes landed on Barboza at UFC Fight Night 61. Johnson was able to outpoint the potent striker on his way to a unanimous decision victory.

8: Victories in the first round. When Johnson gets his groove fast, he finishes early. His first-round victims in the UFC include Dustin Poirier and Edward Faaloloto.

14: Significant strikes landed on Poirier. One of them dropped his opponent and a few more finished him.

2: UFC events headlined. Johnson has shared the main event twice in his career, one with Gaethje at the “TUF 25” Finale and another with Poirier at UFC Fight Night 94.