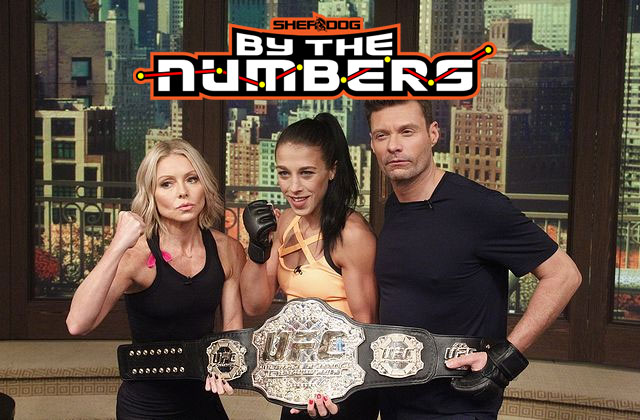 Joanna Jedrzejczyk captured the Ultimate Fighting Championship women’s strawweight title at UFC 185 in March 2015 and successfully defended it five times before ceding the throne to Rose Namajunas more than two years later. Namajunas then defeated her again in their rematch.

Jedrzejczyk seems hellbent on reclaiming the 115-pound championship, but before she can think about exacting revenge on Namajunas, she must confront Tecia Torres at UFC on Fox 30 on Saturday at the Scotiabank Saddledome in Calgary, Alberta. Torres’ only two professional losses have come to Namajunas and Jessica Andrade.

As Jedrzejczyk prepares to face “The Tiny Tornado” inside the Octagon, here are some of the numbers that have come to define her:

2: Rounds needed to defeat then No.1-ranked Russian flyweight Julia Berezikova. In only her fourth fight, Jedrzejczyk faced the more experienced Berezikova and won by unanimous decision.

14: Victories without a loss to start her professional MMA career. Jedrzejczyk compiled more than half of the streak in the UFC, where she put together an impressive list of victims that included top-ranked strawweights.

1: Round needed to dispatch Karolina Kowalkiewicz as an amateur. Jedrzejczyk submitted her fellow Pole with a rear-naked choke.

2: Weight divisions in which she has competed. Before running through the 115-pound weight class, Jedrzejczyk fought as a flyweight. She debuted at strawweight in her first fight in the UFC, as she decisioned Juliana Lima.

48: Percent striking accuracy, according to FightMetric. Jedrzejczyk has made use of her kickboxing background in the cage.

4: Wins by knockout or technical. The fighters who have been victimized by Jedrzejczyk are Kate Jackson, Rosi Sexton, Carla Esparza and Jessica Penne.

1: Victory by submission. While there is no denying her standup prowess, Jedrzejczyk has the tools to go to the ground when the situation does not go as planned on the feet. She has one win via rear-naked choke; it came against Lily Kazak in her second pro bout.

1: “Performance of the Night” bonus won since joining the UFC. Jedrzejczyk received a $50,000 check after stopping Esparza with second-round punches to win the strawweight title at UFC 185.

2: “Fight of the Night” bonuses banked under the UFC banner. Her fight-ending performance opposite Penne at UFC Fight Night 69 and her hotly contested rematch with Claudia Gadelha at “The Ultimate Fighter 23” Finale took top prize.

142: Striking differential against Andrade at UFC 211, the widest margin in a championship bout in the promotion’s history. Jedrzejczyk landed a total of 225 significant strikes, while her opponent could only muster 83.

40: Striking differential in her second fight with Namajunas. Jedrzejczyk outlanded the champion 145-105.