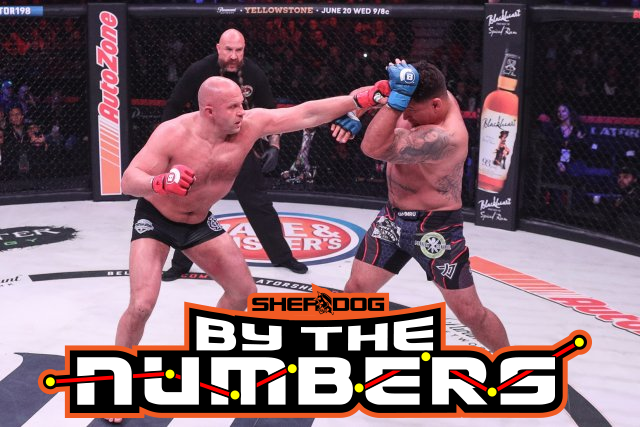 Fedor Emelianenko displayed shades of old brilliance when he knocked out former Ultimate Fighting Championship heavyweight king Frank Mir early in the first round. Now 1-1 in Bellator MMA, he is entered in the promotion’s heavyweight grand prix and will next face Chael Sonnen in the semifinals. The veterans will collide in the main event of Bellator 208. Will “The Last Emperor” post back-to-back victories and move to the finals or will “The American Gangster” deny him of a title run? We’ll find out this weekend, but first, here some numbers that catapulted the Russian to greatness.

4: Straight wins to start his professional career. In his fourth fight, Emelianenko encountered future fellow future Pride Fighting Championships star Ricardo Arona, whom he defeated by unanimous decision. To this day, he considers it one of the toughest fights of his career.

17: Seconds against Tsuyoshi Kohsaka in a controversial doctor stoppage. He would later avenge that loss via TKO at Pride “Bushido 6.”

27: Straight wins after a controversial stoppage against Kohsaka. It turned out that loss did nothing to hurt his career as Emelianenko proved he is a force on the global stage. During that impressive run, he won the Rings 2001 Absolute Class tournament final, the Pride heavyweight championship, which he defended multiple times and the inaugural WAMMA heavyweight title.

5: Wins in under a minute. His list of victims include Sylvia, Mir, Hiroya Takada, Naoya Ogawa and Wagner da Conceicao Martins.

3: Full rounds in a lopsided victory over Nogueira to take the Pride heavyweight championship. According to Fightmetric, he completely outstruck the Brazilian, 79-3. They would meet again two times, one ending up in a no contest and another again in the Russian’s favor.

3: Successful title defenses in Pride. He won the promotion’s heavyweight title by decisioning Nogueira, and defended it from “Cro Cop,” Mark Hunt, and Nogueira in a rematch.

5: Takedowns was his most in a single fight in Pride, Dream and Strikeforce. The multiple-time combat sambo world champion executed these powerful takedowns in his third fight with Nogueira.

1: Loss by submission. Only Werdum was able to tap him out.

17: Submission victories. He tapped out the likes of Silvia, Hunt, Coleman, Randleman and Matt Lindland.

25: First-round stoppages. Then and now, he has proven that he can finish fights fast, even against high-level opponents.

2: Fights with the first UFC heavyweight champion in Coleman. He first submitted the American at Pride Total Elimination 2004 then at Pride 32. Both were by armbar.

18: Years as a professional mixed martial artist. Emelianenko has had 37 wins in 43 fights. His setbacks came at the hands of Kohsaka, Werdum, Silva, Henderson and Matt Mitrione.