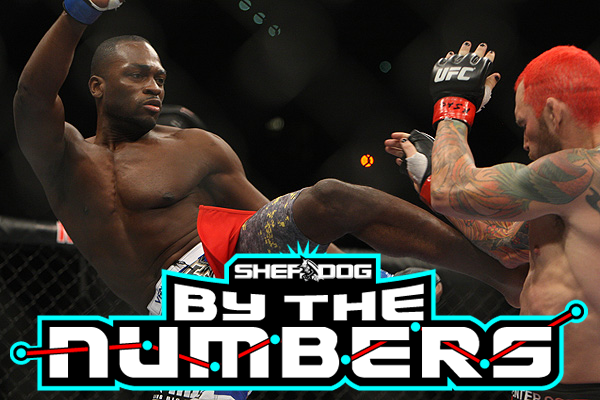 Derek Brunson is looking to bounce back from his most recent defeat, another loss to Ronaldo Souza. In his way is Israel Adesanya, who has been moving up the rankings.

Expect Brunson to do everything in his power to stop the Kiwi in his tracks. As he prepares for their UFC 230 encounter at the Madison Square Garden in New York City, check out some figures that have made Brunson one of the top middleweights today.

3: Times a Division II All-American wrestler from the University of North Carolina at Pembroke. After finishing college, he switched attention to mixed martial arts and started training at Renzo Gracie Jiu-Jitsu and Jackson Wink MMA.

52: Seconds needed to impress in his professional MMA debut, choking out John Bryant at Carolina's Summer Fight Series 1. He followed it up with two more early finishes for the promotion.

4: Consecutive stoppages in fewer than two minutes. Brunson earned the reputation as an early finisher soon in his career, having disposed of his first four opponents quickly.

6: Fights before Strikeforce took notice. He successfully debuted against Jeremy Hamilton at Strikeforce Challengers “Fodor vs. Terry.” He followed it up with two more wins against Lumumba Sayers and Nate James.

3: Full rounds endured in his first loss. The first setback in his professional career was dealt by Kendall Grove for the ShoFight middleweight championship.

2: Back-to-back losses in his career. After bowing to Grove, he lost to Ronaldo Souza in his return to Strikeforce. His second back-to-back defeat happened in the UFC when he faced Robert Whittaker and Anderson Silva in succession.

3: Rounds needed to defeat Chris Leben in his Octagon debut. Right away, Brunson was given a tough assignment and passed it with flying colors

54: Significant strikes as opposed to Silva's 43 at UFC 208. According to Fightmetric, Brunson also scored two takedowns in a fight many believed should have gone the American's favor. Sherdog called it “Robbery of the Year” for 2017.

6: Losses in his career. Brunson is a gritty veteran whose only losses were to high-level opposition. Apart from Grove, Silva, Whittaker and Souza (twice), he also lost to Yoel Romero.

2: Fight of the Night awards. On both occasions, Brunson started quickly but failed to sustain his momentum, eventually losing to Romero at UFC Fight Night 35 and to Whittaker at the headliner of UFC Fight Night 101.

1: Performance of the Night award. In one of the biggest fights of his career, Brunson knocked out Machida with a flurry of punches in front of a hostile Brazilian crowd at UFC Fight Night 119.