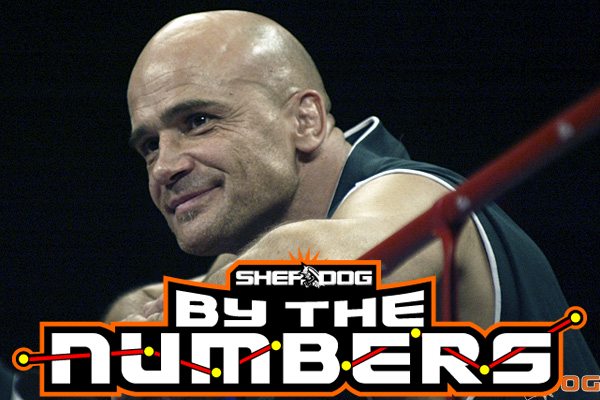 Deceptively technical with a brawler mindset, Bas Rutten was one of the most feared strikers of his time. He is a three-time King of Pancrase champion and a former Ultimate Fighting Championship heavyweight king who never lost his belt. Let this by-the-numbers piece serve as a simple tribute to one of the great minds in mixed martial arts.

14: Years old when he started training in taekwondo. Rutten developed an interest in combat sports when he was 12 after watching “Enter the Dragon,” but it took two years for his parents to finally enroll him in a martial arts school. Later on, he got into a fight and broke someone's nose, and his parents disallowed him from further practicing the art.

20: years old when he started competing in kickboxing. He fought professionally 16 times, knocking out his first 14 opponents, 13 of them in the opening round.

43: Seconds to knock out Ryushi Yanagisawa in Rutten's debut at Pancrase. It happened in 1993 at the promotion's very first event held in Chiba, Japan.

1: Round lasted against Masakatsu Funaki, who executed a toehold on him to stop the clock at 2:58. It was Rutten's first loss, and because of it, he realized the importance of grappling. Later on, he avenged that defeat with a KO finish.

2: Fights with “Mo” Smith. By this time, Rutten has been focusing on his grappling and it showed in his two submission wins over the American kickboxing champion. He first won by kneebar and then by rear-naked choke.

3: Fights with Frank Shamrock. Rutten figured in a controversial upset loss, then an MMA newcomer. The referee broke them up when Rutten had locked in a rear-naked choke under the ropes. The same thing happened in their rematch when the referee controversially broke up two kneebars from Rutten when they were under the ropes. This time, however, the Dutch-American got the judges’ nods. In their third fight, Rutten left no doubts when he forced a doctor stoppage and unified the King of Pancrase titles.

0: Times he’s been knocked out. On the other hand, Rutten has tallied 12 KOs in his MMA career.

2: Fights in the UFC. He TKOd Tsuyoshi Kohsaka at UFC 18 and decisioned Kevin Randleman at UFC 20.