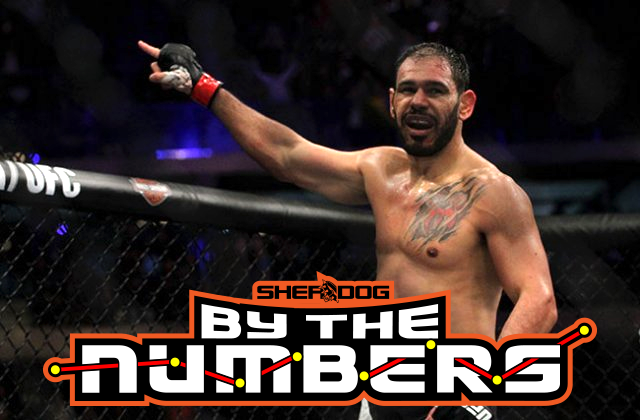 Antonio Rogerio Nogueira has been missing in action for nearly two years. His last Octagon appearance didn’t turn out well as he was brutalized by top-ranked Ryan Bader. Now cleared to fight again, he will go up against Sam Alvey on Sept. 22 at UFC Fight Night 137.

Now 42 years-old, “Little Nog” may not be the athlete he was years ago but his boxing and jiu-jitsu are still something to behold. Here are some more numbers that have made him relevant in this day’s mixed martial arts landscape.

35: Seconds needed to choke out Yusuke Imamura in Nogueira’s Pride debut at Pride 20. It was here where he found his home until it ceased operations in 2007.

3: Full rounds with Vladimir Matyushenko at an event called UFO: Legend in August 2002. That time, the decorated Belarusian wrestler was already a veteran MMA fighter fresh out of a UFC title fight with Tito Ortiz. Nogueira lost to him by unanimous decision, but “Little Nog” would avenge this loss with a KO a few years later at “Affliction: Day of Reckoning.”

2: Fights with Alistair Overeem. They met at Pride 29 and Pride FC: Critical Countdown Absolute, and Nogueira won on both occasions.

10: Fights in Pride Fighting Championships. He had a brief stay outside of Pride after the Imamura fight, and when he returned at Pride 24, he faced a much more experienced Guy Mezger. Nogueira took this one by split decision. This was followed by impressive wins over Kazuhiro Nakamura (twice), Kazushi Sakuraba, Overeem and Dan Henderson. He was 8-2 overall at the Japan-based promotion.

1: Round needed to finish compatriot Luiz Cane in Nogueira’s Octagon debut. With his crisp striking, he finished the fight at 1:56 and earned Knockout of the Night honors.

2: Times he fought Rua, first at Pride Critical Countdown 2005 which was for the Pride Middleweight Grand Prix quarterfinal and then at UFC 190. Both ended up in Rua’s favor.

10: Fights in the UFC, and is 5-5 so far. He holds wins over Cane, Jason Brilz, Ortiz, Rashad Evans and Patrick Cummins, with losses to Phil Davis, Anthony Johnson, Rua, and Bader (twice).

2: Fight of the Night bonuses, which he shared with Brilz and Rua (rematch). His first fight with “Shogun” earned them Sherdog’s nod as Fight of the Year.

7: Wins by KO or TKO. His high-level boxing was on full display on his conquests of Overeem, Todd Gouwenberg, Edwin Dewees, Matyushenko, Cane, Ortiz and Cummins.