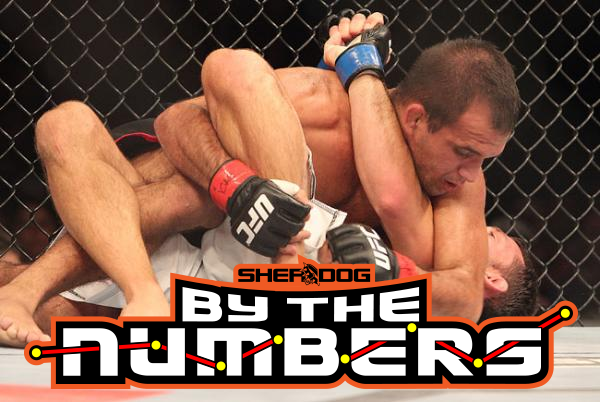 Former World Extreme Cagefighting title challenger Rani Yahya has breathed new life into his career. Since he moved to American Top Team after a March 2017 defeat to Joe Soto, he has rattled off two straight wins, as he submitted Enrique Briones with a kimura at UFC Fight Night 144 and tapped Russell Doane with an arm-triangle at UFC on Fox 28.

Yahya will carry his two-fight winning streak into UFC Fight Night 135, where he meets Luke Sanders on Saturday at Pinnacle Bank Arena in Lincoln, Nebraska. The Brazilian jiu-jitsu black belt has compiled a 10-3 record under the Ultimate Fighting Championship banner, with wins over Mike Thomas Brown, Mizuto Hirota and Masenori Kanehara.

In advance of Yahya’s clash with Sanders, here are some of the numbers that have come to define one of the bantamweight division’s more underappreciated veterans:

3: Divisions in which he has fought as a mixed martial artist. Before settling at bantamweight, Yahya also competed at lightweight and featherweight.

2: Victories in the 2006 K-1 Hero’s lightweight grand prix. Yahya defeated Ryuki Ueyama and Kazuya Yasuhiro before losing to Gesias Cavalcante in the semifinals.

7: Fights inside the WEC. Yahya broke into the promotion in 2007, when he was rostered following a 23-second submission of Louie Moreno at a Palace Fighting Championship event.

3: “Submission of the Night” awards won in the WEC. Yahya choked out Yoshiro Maeda, Eddie Wineland and John Hosman in consecutive appearances and earned post-fight bonuses in all three performances.

14: Fights in the Ultimate Fighting Championship. Yahya has lost only to Soto, Chad Mendes and Tom Niinimaki, all by decision.

1: Round needed to defeat Mark Hominick. Yahya answered a difficult challenge in his WEC debut, as he submitted “The Machine” with a rear-naked choke in just 79 seconds.

5: Rounds fought against Chase Beebe in a failed bid to capture the WEC bantamweight championship. Yahya lost a unanimous decision in what was his second appearance with the promotion.

4: Fights in which he has recorded at least four takedowns in the UFC and WEC. Yahya executed four of them against Kanehara, five against Hirota, six against Takeya Mizugaki and seven against Michinori Tanaka.