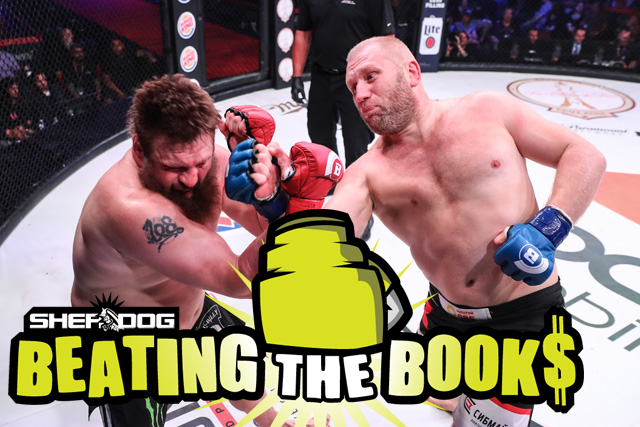 Two Bellator MMA cards took place during the weekend of Oct. 12-14, as Bellator 207 went down on Friday at the Mohegan Sun Arena in Uncasville, Connecticut, and Bellator 208 took place on Saturday at the Nassau Veterans Memorial Coliseum in Uniondale, New York. The sportsbooks offered odds for each main card fight, meaning there were 10 bouts on which bets could be placed. For the most part, the betting favorites came through, but in three instances, the underdog cashed. Here are the three fighters who pulled off upsets in the latest edition of Beating the Books.


One of the most impressive performances of the Bellator doubleheader belonged to Kharitonov, as he knocked out Roy Nelson at Bellator 207. Everyone knows Nelson is extremely durable and tough to stop, so to see the Russian take it to him and finish him with just seconds left in the first round was unexpected. It was the first knockout loss for Nelson since his 2014 defeat to Mark Hunt and just the third of his career; Andrei Arlovski was responsible for the other in EliteXC. Kharitonov had won nine of his past 10 fights while Nelson had not strung together consecutive victories in years, so it was shocking to see such lopsided odds for this fight. Sharp bettors who put money on Kharitonov were rewarded with +220 odds.


The biggest upset of the weekend took place at Bellator 207, where Corey Browning shocked the MMA world with a second-round technical knockout of Kevin Ferguson Jr. Browning was on the rebound following of a stoppage loss on the regional circuit, and on paper, this looked like a match Bellator booked to give “Baby Slice” a winnable fight. Not so fast. Although Ferguson won the first round, he completely gassed in the second -- a fact which allowed Browning to gain top position on the ground and rain punches until the referee stepped in. This was one of the biggest upsets of the year in Bellator, as Browning cashed out as a monster +650 underdog. Not many people even knew who Browning was entering fight, so kudos have to be given to anyone who put money on him here. Judging by the line, though, most of the money came in on Ferguson.


The only upset to take place at Bellator 208 came courtesy of Kongo’s fists, as he knocked out Timothy Johnson in the first round and spoiled the American’s Bellator debut. Kongo may be 43, but he’s still knocking out his contemporaries, and it remains a shock that he wasn’t included in the Bellator heavyweight grand prix. With an 11-2 record in Bellator, Kongo is clearly one of the best heavyweights in the promotion, and if an opening for an alternate in the tournament final materializes, Kongo should be the first man in line. Seeing him wipe out Johnson in the manner in which he did served as a reminder that his skills remain potent, even at an advanced age. After winning seven straight starts in the Bellator cage, Kongo has earned a big fight in his next outing. The odds on the Frenchman winning as the underdog were +165.