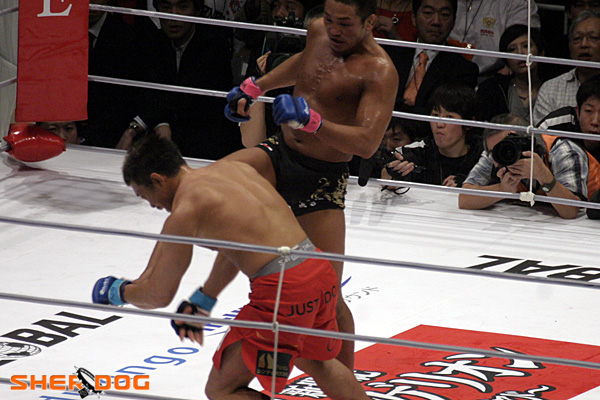 For all intents and purposes, it looked as though “Sexyama” had sealed the deal when his thudding one-two combination caught Misaka off-guard and sent him crashing to the canvas. Akiyama then pounced, launching a ground-and-pound assault hell-bent on finishing the fight. However, Misaki weathered the storm, gathered his bearings and returned to his feet, which is where the tide turned.

Later, Misaki threw one left hook at the body and Akiyama blocked it. Misaki followed with another left hook -- this time at his opponent’s head -- which connected and sent Akiyama tumbling. “The Hitman” then put the finishing touches on the victory with a kick to the face as his foe attempted to get to his feet. It was an incredible shift in momentum, as Akiyama -- reviled by the Japanese crowd -- had been moments away from victory just minutes earlier.

The feeling of euphoria would be short-lived for Misaki. Akiyama’s camp filed a protest stating that Misaki’s kick was illegal, and the Yarennoka executive committee ultimately agreed, changing the bout to a no contest in January 2008. It was determined that Akiyama was in a four-point position when Misaki landed the blow, which according to Yarennoka rules made it illegal.

The post-fight ruling could not dampen the enthusiasm of those the Japanese fans in attendance that night, many of whom vilified Akiyama for alleged greasing incidents at against Kazushi Sakurabi in 2006 and at the World Judo Championships in 2003.