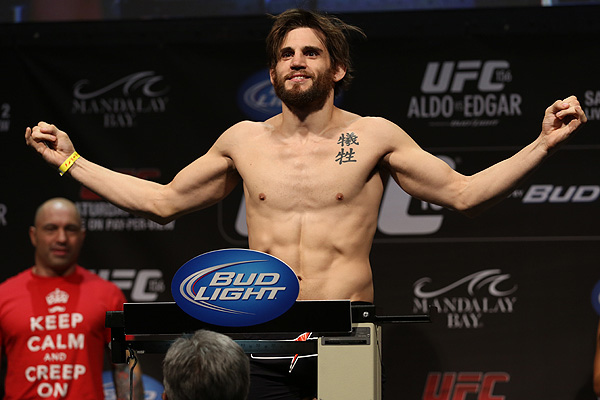 In more than a decade as a pro, Jon Fitch has never lost back-to-back bouts. | Photo: Dave Mandel/Sherdog.com


It has been has been a stellar year for independent mixed martial arts thus far. Invicta Fighting Championships has helped pave the way for female fighters to be taken seriously; One Fighting Championship has continued to cement its hold on Southeast Asia on the backs of two of its stars, Honario Banario and Shinya Aoki; and the World Series of Fighting has emerged as a serious contender in the American market, banking on big-name veteran and exciting young talent.

In the past, the summer months have always been a little slow when it came to MMA, but not this year. Promoters from Brazil and Poland to Canada and Korea will be firing on all cylinders in June. Fasten your seatbelts and hang on tight, as we take you on a unique ride through eight different countries to uncover the sport’s best-kept secrets.

As always, the list does not focus on the well-promoted main event bouts from major organizations you already know to watch, but rather on fights from all over the planet that are worth seeing. Ultimate Fighting Championship and Bellator MMA cards are excluded by design.

Plenty of noise was made about former UFC title contender Fitch’s inglorious exit from the promotion. However, the 35-year-old American Kickboxing Academy standout will have little time to shed a tear about his remarkable eight-year stint inside the Octagon coming to an end, as he will meet a familiar foe in his WSOF debut. The two welterweights collided in Fitch’s second-ever UFC fight in April 2006. Back then, Fitch won by rear-naked choke. Burkman, 33, has won seven out of eight fights since receiving his own release from the UFC. The WSOF undercard streams live and free on Sherdog.com.

The mere mention of Vale Tudo Japan brings back fond memories of Rickson Gracie, Royler Gracie, Frank Shamrock and Randy Couture battling it out in the Land of the Rising Sun in the mid-1990s. In 2009, the legendary event series was revived, with one more show following in 2012. In the latest offering, the brightest hope of Japanese MMA, Norifumi “Kid” Yamamoto pupil Horiguchi takes on reigning King of Pancrase Ishiwatari. The winner of their bantamweight showdown could certainly become a hot ticket for a future UFC show in Asia.

Pendred’s SBG Ireland teammates, Gunnar Nelson and Conor McGregor, have already made it to the UFC and the 25-year-old powerhouse wants to join them as soon as possible. To do so, “The Punisher,” who has gone the distance in each of his last five fights, needs a decisive victory over a recognizable opponent. Enter Mills. Released by the UFC following a four-fight stint that resulted in two wins, a loss and a no-contest, “Beautiful” has found his new sporting home with Cage Warriors Fighting Championship. The 30-year-old knockout artist gets to challenge for the title right away.

KSW middleweight champion Materla has been put in a tough spot, as he once again plays second fiddle to promotional cornerstone Khalidov. In his last fight, “Cipao” managed to outdo the Chechen all-rounder by knocking out common opponent Rodney Wallace 94 seconds faster than Khalidov. That will be significantly more difficult as he faces “The Ultimate Fighter” Season 3 winner Grove next. The rangy Hawaiian submitted to a Khalidov Achilles lock in December and will be looking to avoid the first three-bout losing streak of his career.

Two of Brazil’s most talented women confront one another in the Real Fight 9 main event. Jorge “Macaco” Patino student Faria will enter the evenly matched battle as the slight favorite, but Andrade, five years her junior, took her career to the next level with a huge submission win over tough Russian export Milana Dudieva in April. At the rate they are going, it would not be a surprise if we see one of them fighting big-name opposition in the United States before the year is out.

Pettis was carefully groomed by trainer Duke Roufus to follow in his older brother’s footsteps and become a future star. So far, the 19-year-old flyweight prospect has been competing against tune-up opponents with limited and subpar records. However, in his eighth fight as a professional, he will step it up in a major way, as he takes on a UFC, Pride Fighting Championships and Strikeforce veteran in Curran. The 35-year-old Brazilian jiu-jitsu black belt lost two decisions as a bantamweight in his second stint with the UFC but will drop down to 125 for the scrap with Pettis.

After a two-fight stint at 155 pounds, former M-1 Global welterweight champion Zavurov returns to his old weight class to complete his trilogy with Switzerland’s Enomoto. A 29-year-old Brazilian jiu-jitsu brown belt, Enomoto has fulfilled his contract with M-1 but will stay in Russia for his rubber match with the Dagestani wrestler in the Fight Nights “Battle of Moscow 12” headliner. Zavurov won the most rounds in their two fights and took the first one by unanimous decision; he suffered the lone submission defeat of his career in their second encounter.

Two of the best strawweights in the world will lock horns to decide the next challenger for Mitsuhisa Sunabe’s championship. Dragontail Fighting Academy’s Abe -- not to be confused with Hiroyuki “Abe Ani” Abe of AACC fame -- was stopped by a flurry of Sunabe’s punches 50 seconds before the end of their inaugural flyweight King of Pancrase title bout. He undoubtedly wants to avenge perhaps the toughest loss of his career, but he first has to make it past seasoned Shooter Tahara. The 29-year-old Saitama, Japan, native has never been submitted in his 18-fight career.

Canada has become an MMA hotbed in recent years. Georges St. Pierre and Rory MacDonald fly the Maple Leaf inside the UFC’s Octagon, and domestic promotions like the Maximum Fighting Championship and Elite 1 MMA Productions also continue to be quite successful. Those two power players will be joined by fledgling Toronto-based organization Substance Cage Combat. In its inaugural event, former top-rated domestic bantamweight Wooley will return from of a two-year hiatus to take on fellow Ontario native Turner.

Deep mainstay Otsuka showed significant promise early in his career, as he went 10-4-1 in his first 15 fights. A major slump that saw him lose seven out of his next nine fights made sure any hype the young Greco-Roman wrestler had built cooled. Now 26, Otsuka has recovered some of his past form, winning his last three fights. In a rare foreign assignment, the AACC representative will take on One Fighting Championship titleholder Kim in the latest offering from Road Fighting Championship. Despite his young age, the 21-year-old Korean already holds strong wins over Kevin Belingon and Leandro Issa.