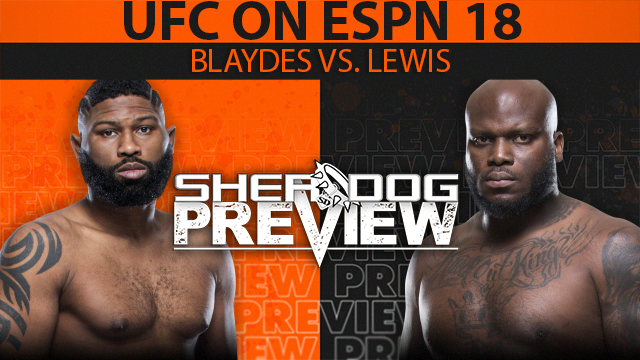 UFC on ESPN 18 this Saturday in Las Vegas is essentially a one-fight show in terms of marquee value, as the heavyweight main event between Curtis Blaydes and Derrick Lewis stands alone in terms of combining stakes and entertainment value. The co-headliner does hold some intrigue, as Anthony Smith looks to turn around a rough 2020 campaign with a win over Devin Clark. The rest of the lineup looks like a middling slate, but the Ultimate Fighting Championship did well to place some high-upside talents on the main card. The Amir Albazi-Zhalgas Zhumagulov winner has a chance to make some noise at flyweight, while Miguel Baeza and Spike Carlyle are athletic talents to watch.

Now to the preview for the UFC on ESPN 18 “Blaydes vs. Lewis” main card:

In a world where Francis Ngannou does not exist, Blaydes could be the UFC's heavyweight champion by now. Blaydes made his UFC debut in 2016 with a loss to Ngannou, but it was a bout in which both men showed promise. Ngannou showed much-improved takedown defense from his own debut just four months prior, while Blaydes held up to one of the hardest hitters in the sport until an injury forced the doctor to stop the fight. From there, “Razor” Blaydes went about showing why he was such a hyped prospect, mauling opponent after opponent with his powerful wrestling game while building out some solid striking fundamentals. Blaydes got himself firmly into the championship mix by the end of 2018, but a rematch against Ngannou halted his momentum, as “The Predator” scored a knockout in just 45 seconds. As a result, it has been back to the grind for Blaydes, who had what looked to be a breakout performance against Junior dos Santos in January. Dos Santos essentially sold out on stopping the takedown as his main focus, which allowed Blaydes to have a surprisingly effective striking performance and knock out the former champ. However, Blaydes did show some cracks in a one-sided win over Alexander Volkov in July. Volkov’s ability to survive Blaydes’ ground attack and take the bout into championship rounds left Blaydes exhausted by the end of 25 minutes. Given that reality, there has been some wonder about how Blaydes can fare against someone who possesses Volkov’s survival skills and the additional power the Russian lacks. That makes it a real interesting time for Blaydes to face Lewis.

Lewis’ rise through the heavyweight ranks has been an absolute gift, given that he was essentially written off as a glass cannon after knockout losses to Matt Mitrione and Shawn Jordan over five years ago. However, “The Black Beast” turned the corner in a rebound win over Viktor Pesta. The Czech standout outwrestled Lewis for the better part of two rounds before getting finished in the third, and that is seemingly where the New Orleans native learned the value of staying calm, outlasting his opponent and picking his spots. Sometimes it resulted in absolutely terrible bouts, like Lewis’ main event fight against Shamil Abdurakhimov, but they would almost always end with him scoring a sudden stoppage, beating his chest and cutting a meme-worthy post-fight interview. A 2018 win over Volkov was what truly put Lewis over the edge into immortality. After scoring another late comeback win, Lewis proceeded to remove his shorts and then explain that his “balls was hot”—a moment that garnered so much attention that he was quickly given a heavyweight title shot. Lewis was unsuccessful in his championship attempt, but he has actually continued to improve. After getting some much-needed surgery, Lewis looks to be in much better shape and even fights with an occasional process. However, at its core, Lewis’ style is still about outlasting his opponent and making something happen, which makes this a fascinating bout against Blaydes.

It is a relatively simple dynamic, most aspects of which favor Blaydes, but this is still a well-made fight. Blaydes will almost certainly execute a takedown to start, and Lewis is likely to survive the early going. Blaydes accumulates damage on his opponents rather than being any sort of sudden finisher, and Lewis should be just agile and slippery enough to prevent him from getting full control. Eventually the takedowns will start to wane a bit and Lewis can start having success on the feet. From there, it becomes a question of whether or not Lewis finds a knockout shot. Lewis should be able to hurt Blaydes during the championship rounds, but the Elevation Fight Team rep has proven to be quite durable; and of course, there is a decent chance that Lewis is gassed himself by the time the fourth and fifth rounds come around. Add in that Blaydes keeps fighting even through exhaustion, and he can probably find a takedown or two to slow down things if Lewis gets going. This should eventually devolve into an entertaining mess and may not be all that convincing of a victory when all is said and done, but the pick is for Blaydes to come out with the decision win.