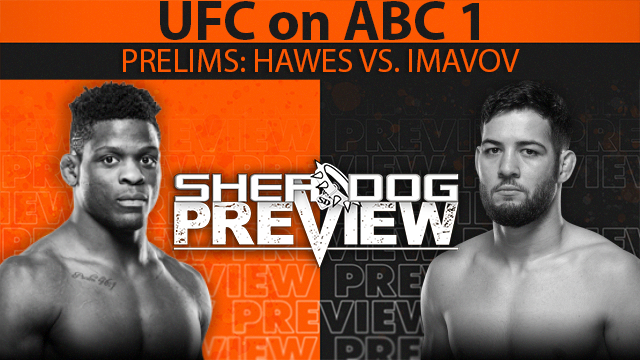 Even though most of the highlights from UFC on ABC 1 are found on the main card, the first slate of prelims for 2021 should also provide some excitement this Saturday in Abu Dhabi, United Arab Emirates. The featured prelim should provide some fun, as former top prospect Phil Hawes looks to continue his long-overdue charge up the middleweight ladder at Nassourdine Imavov’s expense. Past that, there are some bouts that may not have been Ultimate Fighting Championship-caliber in a prior era, but nearly everything here looks entertaining on paper.

Now to preview for the UFC on ABC 1 “Holloway vs. Kattar” prelims:

It took a bit longer than expected, but Hawes is finally making his way up the UFC ranks. One of the consensus top prospects in the world a few years ago, “Megatron” had trouble getting his foot in the UFC door. He failed to even get into “The Ultimate Fighter” house thanks to a loss to eventual Season 23 winner Andrew Sanchez, then fell short against Julian Marquez on Dana White’s Contender Series a year later. After racking up a few quick wins, Hawes finally earned a UFC contract via DWCS in September and ran through Jacob Malkoun in his UFC debut a month and a half later. Up next for Hawes is Imavov, who is also looking to build on a successful UFC debut. Born in Dagestan, Russia, but fighting out of France, Imavov has a clear approach fitting of his “Russian Sniper” nickname, looking to stay slick and pick apart his opponents from range. Wins over Jonathan Meunier and Jordan Williams—the latter in the aforementioned UFC debut—were solid proof-of-concept fights, but Imavov has still been hittable enough that he needs to gain more experience and further hone his approach. Hawes still has not proven he can go more than a hard round before tiring out, which was his issue in the Marquez loss. Still, this still looks like a fight where Hawes’ power and speed should prove to be a bit of a rude awakening for Imavov. The pick is Hawes via first-round knockout.