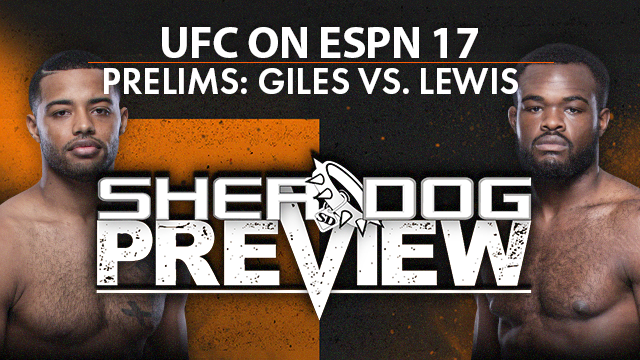 UFC Fight Night 182 on Saturday provides an acceptable undercard at the UFC Apex in Las Vegas. The featured prelim between Trevin Giles and Bevon Lewis offers some intrigue, as each man snapped a losing streak in his most recent appearance but could use a showcase performance to affirm his status as a top middleweight prospect. There are two legitimately interesting talents in neighboring bouts, where featherweight Giga Chikadze hunts a seventh consecutive victory and high-upside heavyweight Alexander Romanov tries to answer some more questions about his ceiling.

Now to the preview for the UFC Fight Night “Santos vs. Teixeira” prelims:

Giles and Lewis are coming off of wins, but it does feel like they could each use a standout performance here to re-affirm themselves as top prospects. Giles put together a strong start to his UFC career in 2017, but after taking off all of 2018 to focus on his police career, things have gone sideways for “The Problem.” There are still plenty of positives to what Giles brings to the table—he is a plus athlete who leverages his physical ability as both a range sniper and a powerful wrestler—but there is an overconfidence seeping into his game that consistently puts him in trouble. He is not as slick as he thinks on the feet, and his 2019 loss to Gerald Meerschaert showed a worrying tendency to wrestle with a dangerous opponent on the mat. Even his February win over James Krause was not particularly inspiring, as it could be attributed mostly to his physical advantages over a natural welterweight rather than any sort of technical improvements. The good news? With some extra focus and game planning for his opponents, Giles can easily point himself in the right direction. The question the becomes whether or not he will do so as a part-time fighter. As for Lewis, the hope is that he is not a victim of the UFC’s aggressive matchmaking. For whatever reason, the promotion decided to immediately throw him into the fire against Uriah Hall for his UFC debut. To his credit, Lewis looked excellent for the first two rounds, showing off the pressure striking and clinch work that made him a top prospect, but it soon ended in typical Hall fashion, with the promotional newcomer suffering a sudden third-round knockout. That was Lewis’ first professional loss, and it seemed to affect him during his subsequent bout against Darren Stewart. As soon as Stewart presented any sort of dangerous offense, Lewis mostly shut down and coasted his way to a cautious defeat. A January win over Dequan Townsend gave Lewis his first UFC win, but he still has yet to recapture the form he showed before the Hall knockout. That sets up a fascinating dynamic. Giles will certainly be more willing to throw out offense, but that could just wind up giving Lewis the openings he needs to find success. Even if Lewis does not press his advantages in the clinch, there is every chance that Giles decides to lock horns with him in that phase and hands him those advantages. On the feet, it feels like Lewis can enjoy success if he just chooses to throw. Again, his opponent is overconfident in his striking defense, and this is also a rare fight where Giles is facing a longer athlete who should have even less of an issue touching him from range. In a fight where both men use their athleticism to paper over their flaws, it becomes difficult to not just pick the better athlete. The pick is Lewis via decision.