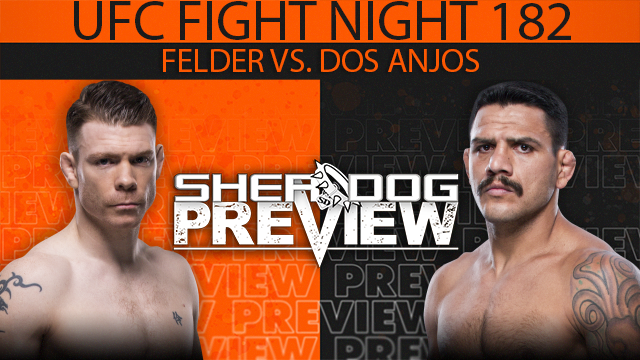 By stepping in for Islam Makhachev on less than a week’s notice, Felder saves what was one of the weaker cards of the year on paper, as his UFC Fight Night 182 headliner against Rafael dos Anjos figures to be a guaranteed banger on Saturday at the UFC Apex in Las Vegas. In fact, the show’s two most interesting fights did not exist a week ago. In addition to Felder-dos Anjos, Brendan Allen meets Sean Strickland to open the main card in a fascinating and relevant affair. Beyond that, this is all about action. The Abdul Razak Alhassan-Kalinn Williams welterweight co-main event and the Julian Marquez-Saparbek Safarov middleweight showcase are more about the haymakers than any fighter’s individual ceiling. Meanwhile, Eryk Anders faces Antonio Arroyo to round out the lineup for what should be a fun time.

Now to the preview for the UFC Fight Night “Felder vs. dos Anjos” main card:

This marks dos Anjos’ return to lightweight, and while it came as a bit of a surprise, the timing seems about right given how little momentum he had going for him as a welterweight. The Brazilian’s rise through the lightweight ranks was an inspirational testament to hard work, as “RDA” lost his first two UFC bouts before seemingly settling into the midcard population. However, dos Anjos quietly improved, and once his newfound pressure striking game finally clicked, it was off to the races. A 2012 win over Kamal Shalorus started a run of nine wins in 10 fights that ended with dos Anjos taking the lightweight title from Anthony Pettis in one-sided fashion. Unfortunately, dos Anjos—typically a reliable workhorse—picked the worst time of his career to get hit by the injury bug. Dos Anjos had to wait nine months before successfully defending his strap against Donald Cerrone, and a big-money defense against Conor McGregor fell apart after the Brazilian broke his foot. Upon recovering, dos Anjos shockingly lost his title—and the chance to headline Madison Square Garden opposite McGregor—to Eddie Alvarez. After another loss to Tony Ferguson left him out of the lightweight title picture, “RDA” decided to ply his trade at welterweight. It went well enough to start, as dos Anjos spent 2017 running through Tarec Saffiedine, Neil Magny and Robbie Lawler, but things quickly went south after his loss to Colby Covington in a fight for the interim title. Going into the Covington fight, a victory would have made dos Anjos a two-division UFC champion and left him as a quiet all-time great, but the loss instead essentially established his ceiling at welterweight. Getting pressured by wrestlers has always been an issue for dos Anjos, and he kept running into the same stylistic matchup at the top of the welterweight division. As a result, dos Anjos has lost four of his last five fights, mostly against wrestlers, and even his win over Kevin Lee saw him get outwrestled until “The Motown Phenom” tired himself out. Given those issues with physicality, it is a worthy gambit for dos Anjos to cut back down to 155 pounds. He will get an interesting test here against a late replacement in Felder.

This looks to be a prime spot for Felder: No matter what happens here, going from the commentary booth to the main event of a card he was supposed to call is an admirable move. While Felder has become a stalwart of the UFC both inside and outside of the cage, it is worth remembering how close he came to falling out of the promotion. Felder entered the Octagon as a raw prospect with a penchant for spinning strikes, and once a spinning backfist knockout of Danny Castillo made the highlight reels, the UFC immediately pushed him into fights for which he was not quite ready. However, “The Irish Dragon” persevered and eventually settled into a pressuring approach that allowed him to keep wading through damage to try and outlast and batter his opponents. Once everything clicked, Felder immediately started rising on the lightweight ladder; add in the likeability that the Philadelphia native has shown on the mic, and the last few years have seen Felder become one of the biggest fan favorites in the sport. After a controversial loss to Dan Hooker in February snapped Felder’s winning streak at lightweight, he teased retirement and, frankly, has been talking like a retired man during his fight calls in the months since. Even so, a big opportunity against a former champion presented itself here, and if nothing else, Felder should make this a fun fight.

Assuming dos Anjos can still cut weight as easily as he did four years ago, this should be a successful return to 155 pounds for the former champion. Both men should look to move forward, but Felder does not seem to present the type of pressure that historically gives dos Anjos issues. Felder can certainly cause damage in the clinch—it might be the most powerful phase of the Philadelphian’s game—but he is not particularly controlling there, and dos Anjos figures to be the stronger fighter and seems likely to take over any grappling exchanges. That is essentially the bet, that dos Anjos’ physicality becomes an advantage once again at lightweight and allows him to take over in a fight that should be full of head-on exchanges. Also, the fact that he has actually trained for this should obviously help, although Felder is reportedly in excellent shape and looked fine going 25 minutes against Hooker in February. It would not be a shock if this was close, but dos Anjos by decision is the pick.