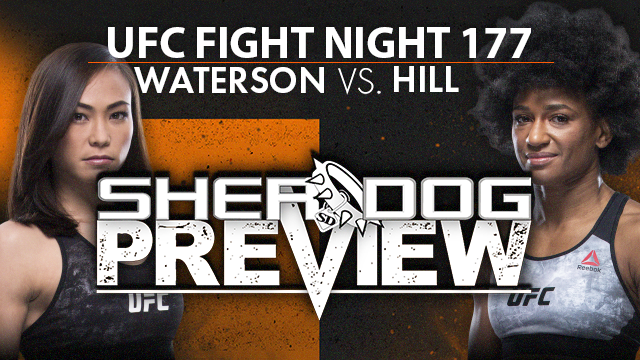 Like a few other pandemic-racked cards, UFC Fight Night 177 on Saturday gets hurt by not having a true main event-level bout. Admittedly, that was not the Ultimate Fighting Championship’s plan going in, as a light heavyweight contender showdown between Thiago Santos and Glover Teixeira was scheduled and postponed. However, the lack of that one culminating fight does bring down a surprisingly deep lineup from top to bottom, including this five-fight main card. Two women’s fights—the Michelle Waterson-Angela Hill strawweight headliner and the Roxanne Modafferi-Andrea Lee flyweight pairing—stick out in terms of stakes, and what those may lack in excitement gets more than made up for by the other three bouts. Khama Worthy-Ottman Azaitar should offer some fireworks from one side or another, while Billy Quarantillo always provides action and Ed Herman fights are always fun in their own way.

Now to the preview for the UFC Fight Night “Waterson vs. Hill” main card:

This does not feel like a main event so much as the fight that happens to come last, but this should still be an entertaining scrap that provides some long-overdue shine for Angela Hill. Her road to mixed martial arts relevance started on “The Ultimate Fighter” in 2014. Hill was the least-known participant in the field to crown the UFC’s first strawweight champion, and she was unsurprisingly bounced from the bracket by Carla Esparza in quick fashion. With only one pro mixed martial arts bout under her belt after a kickboxing and muay Thai career, Hill came into the UFC proper as a prospect who needed some seasoning. The promotion did not make that much of a priority, as she was quickly thrown into the deep end against Tecia Torres and Rose Namajunas, then cut after two one-sided losses. That easily could have been the last of Hill inside the Octagon, but she quickly landed in Invicta Fighting Championships and proved to be a quick study, rapidly improving to the point that she captured the promotion’s strawweight title and earned an invite back to the UFC just a year later. After a few years in the middle of the strawweight division and a sense that she was not going much of anywhere, Hill decided to take the old Donald Cerrone approach of accepting as many fights as possible, which has paid off both in terms of success and increasing her profile. Hill racked up three wins in five months as 2019 turned into 2020, and her last appearance saw her drop a controversial split decision to Claudia Gadelha. It was a fight most felt Hill had won and a fight that would have been much more of a Gadelha blowout a few years ago. While the loss likely still stings, it did prove that Hill is somewhere close to a Top 10 strawweight in every sense other than her actual ranking; and thanks to a late change to this card, she is rewarded for all her hard work with a main event slot here and a chance for a breakout win against Waterson.

Hill did so on a much quicker timeline, but Waterson is another fighter that has done well to improve over the years and go from curio to legitimate strawweight contender. For years, Waterson was more known for her “Karate Hottie” persona than anything else, but she eventually went on a successful run in the early days of Invicta that saw her become its atomweight champion. Once the UFC came calling, it was unclear how Waterson would fare at strawweight because of her small frame; despite her nickname, she got by as a submission specialist more than anything, and the worry was that larger opponents would be able to control her without much issue. Wins over Angela Magana and Paige VanZant showed that Waterson could handle less skilled competition, though she did eventually hit a hard ceiling against the much longer Namajunas and the much stronger Torres. However, a subsequent three-fight winning streak, marked by victories over Felice Herrig and Karolina Kowalkiewicz, did see Waterson improve her range striking game to the point that she is a clear Top 10 strawweight. Her last few fights—losses to Esparza and Joanna Jedrzejczyk—have once again re-established the reality that, for all her improvements, Waterson can only progress so far. She has still fared much better than most would have expected and looks to hold serve here.

This is a difficult fight to call, which is a credit to Hill given that this would have been an easy Waterson win on paper as recently as a year ago. Hill’s recent winning streak was marked by two clear improvements, and it will be interesting to see if either of them can carry over. In recent years, Hill’s fights followed a clear pattern: She would start off as a crisp and effective striker with a lot of movement, but that style would eventually tire her out. She did not necessarily slow down in terms of volume, but she would become more of plodding fighter who focused more on power. To her credit, Hill’s last two fights have shown a much better ability to pace herself, but now that she finds herself in a five-round main event, her ability to extend that improvement over 25 minutes becomes much more of an open question. The other involves Hill’s recent reliance in her wrestling, particularly in her wins over Hannah Cifers and Konklak Suphisara. That showed that Hill has some extra arrows in her quiver when she has a physical advantage, which might serve her well here against a former atomweight in Waterson. As far as the latter point, Waterson can probably hold her own in those grappling exchanges, if the fight even makes it to that phase. Waterson has filled out enough that she should not be as easily overwhelmed as Cifers or Suphisara were, and Hill is small enough that there is some sneaky height and reach parity that could actually favor the Jackson-Wink MMA mainstay. In a kickboxing match, Hill should be able to get off to a fast start while she is at her best, but the concerns about maintaining a pace mean this should increasingly become Waterson’s fight once it hits the championship rounds. It may become a bit tedious, but Waterson should be able to find a speed advantage somewhere in the second or third round and start winning exchanges from there; and if this becomes a grappling battle, it may actually be good news for “The Karate Hottie,” who is definitely the superior submission threat. The pick is Waterson via decision.