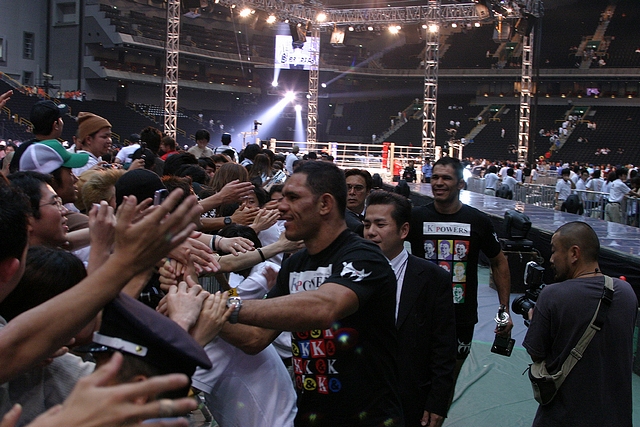 The Minotaur, the head of a bull on the body of a man, is mere myth. “Minotauro,” on the other hand? “Minotauro” is a true legend.

Brazilian fighting icon Antonio Rodrigo Nogueira on Sept. 1 announced that he was hanging up his gloves after 16 long, brutal years inside the cage and the ring. It was bittersweet and long overdue, as the MMA world had watched nearly two decades of toil extract a physical cost on Nogueira. The 39-year-old had absorbed several lifetimes of punishment in his career and, in the process, redefined what “heart” and “guts” meant in mixed martial arts.

Watching a shopworn Nogueira get leveled by Roy Nelson or dominated by Stefan Struve was not difficult simply because he was a sentimental favorite. No, it was difficult because while the heart and guts were still on display, the rest of his flesh was no longer willing. The crafty jiu-jitsu artist with the slick boxing, the hero diving into the flames of combat to emerge scarred-but-victorious more often than not, was gone. The highs of Nogueira’s career were so exhilarating, so lionized, that watching him shuffle around the Octagon in a dilapidated form was jarring.

It was such a bitter pill to swallow because we still remember when he was the Rings King of Kings, the Pride Fighting Championships heavyweight champion and the Ultimate Fighting Championship interim heavyweight champion; we remember when the monstrous Bob Sapp slammed him so hard the lights went out at Tokyo National Stadium and Nogueira armbarred him anyway and when Mirko Filipovic landed the left high kick and Nogueira armbarred him anyway; we remember when he finally fought Randy Couture and when he starched Brendan Schaub at the UFC’s first event in Rio de Janeiro. For many MMA folks, these are not just fights from yesteryear or battle stories of an all-time great; they are inspirational, quasi-religious experiences. Few if any fighters in the history of this sport are as universally beloved, respected and exalted as “Minotauro.”

Alas, time conquers even the greatest of warriors. This is why poets write odes and why we at Sherdog.com continue these oral histories and retrospectives, not to turn back the hands of time but to remind the present and future generations of their triumphs and how they shaped history. With the figurative head of a bull and the literal body of a man, Nogueira is not just a mythical beast of MMA lore; he is one of its surest heroes, too.


Mike Fridley: For those lucky enough to have savored the exhibition that was Pride Fighting Championships in its heyday, it goes without saying that it was the biggest stage the sport ever had. Long before illegal streams and live pay-per-views came to the overseas masses, there was Paltalk.

Legions of diehard fans in North America stayed up until 3 a.m. ET to catch the show, as a live audio play-by-play of sorts was delivered by an Ohioan teaching in Osaka, along with his pals. The spectacle that was Pride was relayed via speech by the Paltalk application, and at the time, it was the only known way to rock the event in real-time without refreshing pages constantly and translating the kanji and katakana.

MMA’s biggest stars fought in Pride, and “Minotauro” was as big as any. I remember the hype of a clumsy-footed Brazilian that had somehow ended up winning the 2000 Rings King of Kings 32-man tournament as he signed with the promotion. For those that remember, it wasn’t uncommon to have Pride fights announced only a few days before the event, and I recall the chatter when it was confirmed that he’d be facing Gary Goodridge. Needless to say, I was enamored with him as soon as I heard over Paltalk that his guard swallowed “Big Daddy” right up. It did them same in his next bout with Mark Coleman, who at the time was considered the best fighter on earth following his performance at the 2000 Pride open weight grand prix. Several more fell victim to the best guard the division has ever seen.

I once thought of “Minotauro” as a man with dual identities: Sure, he was a legit heavyweight with good size and reach for the division, but he had the intricate bottom game of a skilled lightweight. For better or worse, as the game evolved, so did Nogueira’s. It’s pointless to speculate what he could have done if he had tailored the rest of his skills to complement his guard. Regardless, he had a hall-of-fame-caliber career, and his presence will be missed.

The remnants of Pride will return on New Year’s Eve. It’s a shame “Minotauro” will not be involved. Perhaps the Paltalk guys will return to their roots, though. If so, I’ll be there.


Mike Sloan: I know it’s deemed “unprofessional” to admit to anything like this, but Nogueira has been my personal favorite MMA fighter for as long as I can remember. To me, “Big Nog” had it all: a terrific submission prowess, great-for-MMA boxing skills, a granite chin and, most importantly, an inhuman ability to walk through hell in order to win.

There isn’t any one specific moment on Nogueira’s career that sticks out to me the most because he has simply had so many. His struggles in the UFC over the past few years were largely due to his body being completely worn out and battered from all his wars. Even before Nogueira came to the United States to conquer former UFC champs Randy Couture and Tim Sylvia, his legacy was already cemented.

His miraculous come-from-behind submission of the hulking Bob Sapp after nearly getting killed in the opening seconds is something not even Hollywood could create. He did the same thing to Mirko Filipovic, Heath Herring in their third fight and countless others. What made “Minotauro” so special is the way he won when he was at his best: Deep in peril and seemingly on the verge of defeat, Nogueira would somehow survive and then latch on one of his highlight-reel submissions. His resume is filled with a “Who’s Who” of the elite during his 16-year career. For my money, no other fighter in history fought as many elite-level fighters in their primes, not Couture, not Wanderlei Silva, not Matt Hughes, not Georges St. Pierre, not Anderson Silva, not even Fedor Emelianenko himself.

For me, nobody was must-see TV as much as “Minotauro,” because each time he climbed through the Pride ropes or into the UFC’s cage, you knew something special was going to unfold. If there is ever is to be a legitimate MMA Hall of Fame, he’d be a first-ballot inductee without question.

Continue Reading » Nogueira was compulsively watchable. However, as I continued to follow him throughout the years, I found other things to admire about Nogueira. This was a man who hung around in the sport longer than many and courted less controversy than most. You won’t find many people in MMA with bad things to say about Nogueira.