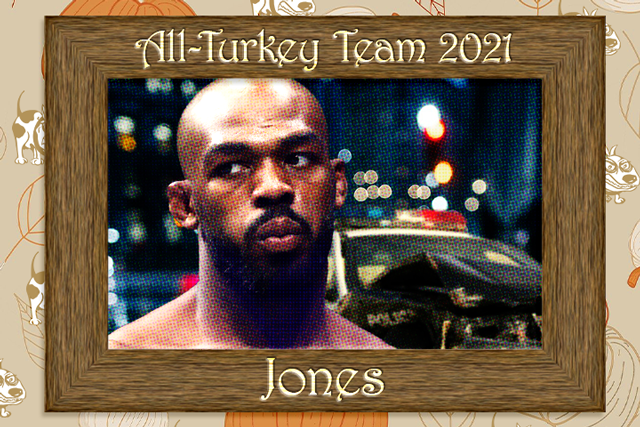 
’Tis that time of year again, folks. While most Americans are sitting around stuffing their faces with turkey, dressing and mashed potatoes and mellowing out to a tryptophan overdose, the staff at Sherdog.com has compiled its All-Turkey Team for 2021. In the past, mixed martial arts has provided us with quite a few questionable characters, and this year has been no exception. The latest group of offenders—or members—delivered what might have been the most eclectic rap sheet yet.


In the eight years since the All-Turkey Team was created to lampoon some of the worst behavior mixed martial arts has to offer, there have been dozens of “honorees,” but only a bare handful of multiple offenders. In fact, if we restrict ourselves to individuals and exclude organizations such as the Ultimate Fighting Championship and the Nevada State Athletic Commission, there have only been four names to grace this hall of shame on more than one occasion. Even if you aren’t yet familiar with this series, you can likely guess some or all of them. After all, to appear here more than once requires a relatively rare blend of traits: the capacity to make poor decisions over and over again, and the requisite skill and/or fame to remain relevant in spite of those decisions.

Even by the standards of that select company, however, Jones stands alone. His facepalm-inducing series of personal and professional missteps from 2015 to 2017 had already installed him as our first triple turkey, ahead of two-time offenders Anderson Silva, Conor McGregor and Edmond Tarverdyan. “Bones” now leaves the pack in the dust as he picks up his fourth plaque. Consider also that Jones’ misadventure last year, in which he drove to COVID-deserted downtown Albuquerque, New Mexico, in the middle of the night and fired guns into the air, could easily have landed him on the 2020 team, which would have made this his mind-boggling fifth appearance in eight years.

Of course, all turkeys are not created equal. The All-Turkey Team has always featured stories that were merely silly or embarrassing as well as legitimately awful, and unfortunately, Jones’ latest brush with infamy was decidedly not of the light-hearted variety.

On Sept. 24, while in Las Vegas to be inducted into the UFC Hall of Fame alongside Alexander Gustafsson for their classic first fight, Jones was arrested for battery, domestic violence and injuring or tampering with a vehicle. A bad-sounding headline only got worse as more details became known: The alleged victim was Jones’ longtime fiancée, Jessie Moses, and the 911 call that led to the arrest had come at the request of two of their frightened children. Even the vehicle damage charge, which turned out to be the former champ allegedly head-butting a police car, seemed to say disturbing things about his state of mind.

Those charges alone, especially bolstered as they were by photos of Moses’ bruised and bleeding face and the disturbing audio from the 911 call, would almost certainly have landed the perpetually troubled Jones on this year’s list. However, what truly sealed the deal was, well, just about everything he has done since. In the days following the incident, Moses declined to press charges and Jones made several public posts showing the two in affectionate poses—a behavior pattern that may sound alarm bells for those who are personally familiar with abusive relationships. Next, Jones lashed out on social media at his critics, accusing them of misrepresenting what happened that night, while he made claims—like his daughters had been asleep at the time—that were easily disproven by the facts in evidence. Other statements made barely any sense, outside of making it clear he was still bent on minimizing the incident.

If there is any small sliver of humor to be found in this otherwise grim story, it came just last week, when Jones proudly tweeted that he was 60 days alcohol-free… 58 days after his drunken escapade. Fuzzy math aside, here’s hoping that he does, in fact, stay sober and never earns that fifth appearance on the All-Turkey Team.